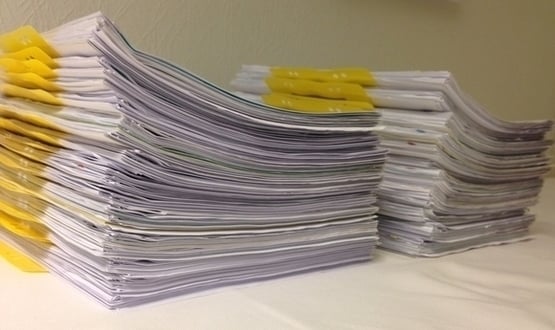 Electronic document management systems are being used for unstructured content of all kinds – not just in hospitals, but beyond. Kim Thomas reports.

Hospitals have always required large volumes of paper to run smoothly. But storage is expensive, and paper processes are slow and inefficient.

Electronic document management solutions, which involve scanning in paper documents and storing them in an easily retrievable way, can bring huge savings in storage space and improve operational efficiency.

Until recently that was the extent of their use. As Vijay Magon, managing director of CCube Solutions says, “In the early years, people were digitising the medical record because they wanted to alleviate paper problems at the departmental level, to stop the paper record library growing.

“They were smaller systems used for nothing more than archiving. Hospitals were still using paper at the point of care.”

Spurred on by the government’s paperless 2020 target, however, hospitals are starting to move towards paperless or paper-light processes. Most, at least, have the ambition to introduce a trust-wide electronic patient record system.

Increasingly, when trusts go down this route, they install an EDM system at the same time, to handle legacy paper and to reduce the amount of paper generated.

Paul Sanders, managing director for digital solutions, health at Civica, agrees there has been a change in the direction of travel. “The ability to integrate to other clinical systems and effectively pull that information into a single version of the truth is the focus of EDM now.”

Although the EDM market has been fairly quiet in the past year or two, Sanders adds that where trusts are implementing the technology, there is a “lower reliance on the digitisation of paper records, and a much higher emphasis on integration at source.”

The challenge, both for trusts and vendors, is to find ways of integrating EPR and other hospital systems, including portals, with EDM systems, so that clinicians and administrators are able to find the documents they need, when they need them.

As Sanders puts it: “What they want is the ability to find information in a single view, so they don’t have to do multiple sign-ons with the clinical systems.”

Because most trusts are still mired in paper, though, and because they often have processes based on hundreds of different paper forms, the transition to digital is far from straightforward.

Decisions have to be made about how far back to digitise and how to make the move as seamless as possible for users.

The involvement of users in creating a system that meets their needs is crucial to success. As Steve Barnes, head of vertical marketing at Ricoh, notes: “If you’re a physician, you’ve got a lot of patients to see and time is critical.”

Discussing workflow with users is critical, because it enables trusts to make the right decisions about what to digitise, says Barnes. If a patient is an asthmatic, for example, do clinicians need to know all that patient’s history, or can most of the benefit be derived simply from having electronic access to their current medication?

Fran Kirke, commercial director at Docman, agrees: “The workflow is the most important part in many instances, and that’s often overlooked in the world of EDM. Particularly in secondary care, if clinicians don’t like the usability of a system, they won’t use it.”

The risk in implementing EPR and EDMS, says Sanders, is that hospitals “just repeat the existing forms and workflow that are in the physical world.” Instead, he argues, they should seize the opportunity provided by digitisation to rethink processes that may have been highly inefficient.

“What hospitals find is that they now understand the problems that when it was paper-based they didn’t realise they had,” says Kirke.

Magon points out that a patient record can be up to 400 pages long, and that no clinician wants to scroll through a 400-page PDF looking for a particular piece of information.

“You need to break the record up when you scan, so you can then look inside the record,” he says. The departmental or specialty separators that exist in the paper record must be carried forward into the electronic system.

CCube has front-end integration with EPR systems such as Lorenzo and Cerner (and it has just signed a partnership with CSC). This enables clinicians to click on a button in the structured patient record to see the relevant unstructured information held in the EDM.

Geoff Broome, managing director of Apira, says it is possible to carry out an implementation relatively speedily, if the process is managed properly. As with other IT projects, this means senior management buy-in, using outsourcing companies to scan in documents and an understanding of the importance of change management.

This year Apira has implemented Kainos’s Evolve EDM system for Ashford and St Peter’s Hospitals NHS Foundation Trust, and integrated it with the trust’s existing EPR.

The process began with scanning patient documents on discharge, on the basis that discharged patients would be likely to have return appointments. That was followed by a “hop, skip and jump” approach, in which the a third of clinics went live at each stage.

After a year of planning, the first clinic went live in May 2016, with the full go-live completed six months later.

Discharge summaries and results are generated electronically and integrated into Evolve, says Broome: “We still do generate paper, but we scan it, so if a piece of paper is created in this hospital, the next time it’s seen, it will be seen on the system.”

Approximately 7,000 day forward files are scanned every week. Apira is now working with the hospital on creating electronic forms to stop the production of paper altogether.

Ashford and St Peter’s, says Broome, can expect to see annual savings of £1.5 million from a combination of saved storage space, staff time saved in hunting for paper documents and answering enquiries. But, he adds, “time to care” savings will be even greater.

The longer-term goal is to make both EDM and the EPR part of the workflow between primary and secondary care, so that GPs, for example, will be able to see the progress of a hospital referral from their own screen.

Civica is working on near-instant cancer referrals, in which the referral is passed directly from GP systems into hospital systems.

EDM has come a long way from its beginnings as a handy method of storing old hospital documents. It is now on the road to becoming an integral part of hospital workflow – and, indeed, healthcare community workflow.

As Kirke says, “The broader EDM term doesn’t cover the world that we find ourselves operating in these days – it’s much more dynamic than it was in the past.”