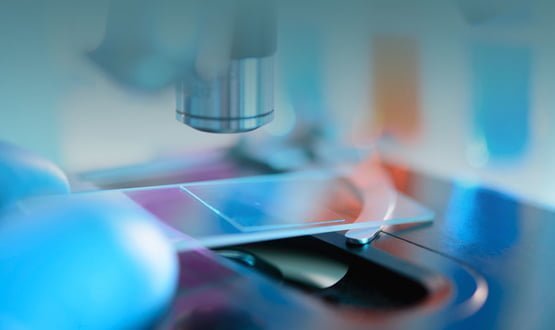 Using computers to fight cancer
David West has a cracker of a Twitter bio. “I use computers to fight cancer,” says the founder of US firm Proscia. “What could be cooler than that?”West is a proponent of digital pathology, and one of a growing band of people who believe its benefits don’t just lie in improving efficiency. By combining slide scanners with sophisticated software, the hope is that digitisation will assist pathologists in making better diagnoses of serious disease.

“Digital pathology broadly speaking drops into two categories,” explains Simon Kimber, UK and Ireland digital pathology business development manager at SysMex. “One is the actual whole slide imaging of glass slides. So glass slides that were traditionally seen down a microscope are digitised – through means of sophisticated digital slide scanners – and you capture a whole slide image of that slide.

“The second category is [assistance] with scoring of slides. So pathologists [currently] look down a microscope and do a score on the presence of cancer cells in this microscope field, and that will grade how severe the disease is, what progress the patient has made, and how well they’ve responded to treatment.

It’s the latter on which Proscia is focusing. West and his colleagues have developed Pathology Cloud, an online platform which enables pathologists to log on and view digitised slides from anywhere in the world.

It’s a far cry from the traditional setup, which requires pathologists to be in the same room as a glass slide and with a microscope to hand. With technology, it is possible for these experts to assess and report on samples from anywhere – and to quickly seek second opinions from colleagues.

Pathology Cloud is also seeking to increase efficiency via a suite of image analysis algorithms, which assist users as they assess slides. “We have a team of research scientists doing R&D work and quickly moving towards this future of digital pathology where I think computers will play a larger role,” explains West.

“Once all this data is digital, we can start to train computers to predict metastasis [the spread of cancer cells to new areas of the body] and recognise tumour very, very quickly.”

West emphasises the intention is not to replace human expertise. “Studies are very clear that when you combine the algorithm with the human, that’s when you get the best results. By far. You get to nearly 100% accuracy when you do that.”

The vision of a much more digital future for pathology is one which has been widely endorsed. In 2006, Lord Carter conducted a review of the field and recommended IT connectivity be put in place for NHS pathology services as a matter of priority. It was a theme he revisited in his productivity review 10 years later.

And then last November, Cancer Research UK issued a report urging trusts to invest in digital pathology. It argued digitisation was key to the sustainability of a sector facing growing demand and issues with recruitment and retention.

Despite all these recommendations, few pathology departments in the NHS have truly embraced a move from the microscope to the computer monitor. Tony Sackville is chair of the digital pathology working party at industry association BIVDA (British In Vitro Diagnostics Association) and fears part of the problem is that the broad benefits of digitisation have not been fully explored.

“Typically in a lab, the first thing that happens when someone comes out with a new piece of technology is the guys in the lab say ‘let’s have a look, stick it on the bench, let’s have a play with it’” he says. “And it becomes a thing that you do in the lab. [But] things you do in the lab are only demonstrably of value if you can have an impact on the patient journey, or on some other outcome across the healthcare system.

“There’s often a disconnect between the decisions that are made to spend on technology in labs and the required output of the health system.”

It’s a point echoed by Kimber, who is a colleague of Sackville’s at BIVDA. “In the NHS, digital pathology is of course a new technology, and it requires new money because it’s not replacement equipment in the pathology arena, and that requires a business case. And not every pathology department has experience of creating compelling business cases to justify funding,” he says.

Staff at Leeds Teaching Hospitals NHS Trust hope their work might help others who are seeking to build just such a case. The organisation has a full digital pathology deployment and validation underway.

“We aim to demonstrate the substantial clinical and productivity benefits of adopting clinical pathology on a large scale in an NHS setting,” explains Bethany Williams, who in 2015 was appointed by Health Education England as the world’s first leadership and management fellow in digital pathology.

Williams is working on a pilot study looking at the use of digital pathology for the diagnosis of breast histopathology specimens. Part of this has involved developing ways to give pathologists confidence in going digital. “Our team has developed a training and validation protocol for individual pathologists,” she reports. “It allows them to gain real world experience of digital in a risk mitigated environment, and gain competence and confidence in their use of digital.”

The confidence issue will be an important one if digital is to truly break through in the clinical pathology field. Early scanners were not hugely reliable, and it’s been enough to put some pathologists off the concept. “Much of the existing apprehension regarding digital diagnosis is based on experience of hardware, software and interfaces that have long been superseded,” says Williams.

Sackville agrees. “Because the technology has moved very fast, the solutions that are available now are very different to what was available even three years ago,” he says. “A lot of pathologists are looking again, they’re saying, OK, it does look like quite a lot of thought and effort has gone into making this a useable system.”

He thinks chief technology officers can also be reassured current systems are fit for purpose. “All the systems that are available on the market are integratable with LIMSs (Laboratory Information Management Systems) and other surrounding IT infrastructure.”

And he suggests there are ways to manage costs for storing the large images created by scanners. “We all know the cost of storage is going down as time goes on, so if you just buy storage as you need it rather than buying it all at once, then you’re maximising your spend.”

Some feel a tipping point may be on the horizon. SysMex’s Kimber says the past quarter has been filled with enquiries about the company’s digital pathology solutions – it provides high throughput slide scanners for the clinical market and a full software suite.

Sackville works at Philips, where the mood is also bullish. “We have approximately 200 installations [worldwide] now,” explains Stuart Shand, commercial director for the firm’s digital pathology solution. “Of those, we’re very proud to say that nine or 10 are working fully digitally – where their pathologists don’t see the glass slides any more, and work completely in the new digital way of working.”

Philips client LabPON, based in the Netherlands, has reported between 10 and 15% efficiency gains in their speed of diagnosis. And IDEXX Laboratories, a US-headquartered firm, speaks of a 50% improvement in turnaround times.

Interestingly, Shand doesn’t see the UK as a significant laggard on digital pathology. “I really feel the UK is on the cusp of making this switch to digital,” he reports. “And if we think microscopy has remained unchanged for 100 years, the fact that some countries are maybe a year to 18 months behind other countries, I wouldn’t necessarily consider that to be lagging.”

It may be that impending guidance from the Royal College of Pathologists helps progress along. And many in the industry also hope the US FDA (Food and Drug Administration) will soon approve digital pathology for primary diagnosis, removing another hurdle to clinical uptake.

“Digital pathology is coming,” concludes West. “And while there are some challenges to overcome, and some investments to be made, there are some incredible benefits to be realised.” After all, what could be cooler than using computers to fight cancer?