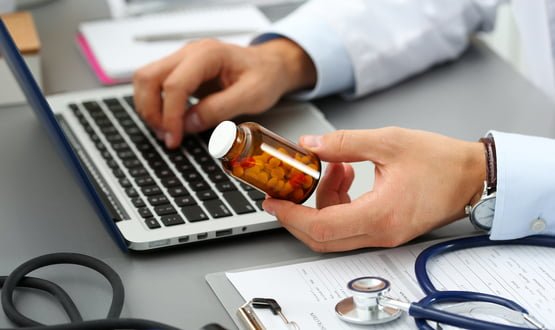 The benefits of e-prescribing have long been emphasised, and uptake is increasing – albeit very slowly. The next step: harnessing the growing functionality and increasing intelligence that such systems can offer. Claire Read reports.


You’ll have heard about the potential benefits of e-prescribing. Perhaps it was from Tim Kelsey, the former national director for patients and information, who was fond of citing it as an example of the sort of technology the NHS should get on and adopt so as to save lives. Or maybe you’re aware of Lord Carter recommending its uptake in his review of NHS productivity.

Perhaps you remember the flurry of attention e-prescribing received when it was announced the entirety of the first tech fund was going to go towards funding the implementation of such systems. (Spoiler alert: that’s not quite what happened.)

Linda Elverson firmly believes national figures are right to emphasise the value of doing away with paper prescriptions and moving to digital – whether that’s an increase in patient safety, greater operational efficiencies, or supporting clinicians to make the best decisions on which medications to use.

But she’s also realistic: she knows that simply implementing a system isn’t going to be enough to immediately realise those benefits.

“E-prescribing is a journey, and trusts don’t always have the capacity to achieve everything they require from day one,” argues Elverson, who is business development manager for e-prescribing at Civica.

It is a journey on which increasing numbers of organisations are embarking. The first Digital Health Intelligence clinical digital maturity index (CDMI) report, published in November 2013, found less than half of NHS acute trusts had an outpatient e-prescribing system in place and only a quarter used an inpatient system.

It’s slow progress, but progress nonetheless, and enough to make Steve Reggione suggest that a tipping point may finally have been reached. “I think people are now seeing that e-prescribing is not as difficult as it had been made out to be,” argues Reggione, business development manager at JAC.

“Obviously, it’s a challenging project and change management is crucial. But systems are more mature, there’s more choice in the marketplace, and you can make an informed choice by looking at a customer base where it’s actually been deployed – and that was also a challenge before.”

Greater maturity of systems means more advanced functionality, including the ability to go electronic for more complicated prescriptions – medical gases, for example, or for drugs such as the blood thinner warfarin, for which the correct dosage depends on a patient’s test results.

Dose checking as a gold standard

“Dose checking is often seen as the gold standard [for e-prescribing] by clinicians,” reports Reggione. “So being able to put an indication in and be guided to an appropriate dose range that’s either a national standard, or a locally configured range that’s relevant to a clinical speciality or even to an individual is hugely important.”

He continues: “The attitude we’ve taken to this is that we’re going to provide a framework where customers are able to locally define their own dosage rules, and then share them with other customers. So this will allow people to deliver outcomes-based reporting by sharing with their peers what they have found to be acceptable dose ranges, and safe prescribing based on particular indications.”

The value of data

For Kenny Fraser, there is real value in the data produced by e-prescribing systems. Fraser is chief executive of Triscribe, which is developing an e-prescribing analysis tool. One of his co-founders is Ann Slee, who was until recently national clinical lead for e-prescribing at NHS England.

“We’re trying to put the academic intelligence in the hands of frontline hospital staff so they can make practical use of it,” explains Fraser. That includes enabling staff to, for instance, monitor how the rate of antimicrobial prescribing varies across an organisation, or to identify wards which have a particular problem with giving medication late.

“If we’re going to have e-prescribing in hospitals, we need to be able to do some analytics based on that e-prescribing to get the value out of it,” Fraser contends.

“What’s typically happened is that a hospital installs an e-prescribing system, gets it running, and it captures prescribing data. But unless you pull that data out and do some analysis and do some visualisation of what it’s telling you, then you only get so much value out of that.”

Analytics is an area Civica also believes holds promise as the firm looks to further advance e-prescribing. The software has a real time analytical dashboard already implemented. “It takes information that is happening in real time and presents it in a way that will help the trust monitor their performance; that will help them understand if they’re achieving their prescribing and administration KPIs,” explains Elverson.

“You can take that high level view in a dashboard, and then drill down to understand why something is happening – why are people prescribing off formulary, or why have I got patients with missed doses. So actual prescribing and administration information is very powerful. It’s very powerful for an organisation to be able to act on that information there and then.”

Regionne agrees. “A lot of our customers are delivering missed dose reporting now, using real time reporting tools. You’ve got users who can immediately respond to the fact a dose has not been given to a patient. And those things really change clinical practice.”

Vendors also suggest e-prescribing can support changes to the healthcare system as a whole. Elverson speaks of her company’s software as being well suited to evolving organisational forms. “The capabilities are there within Civica Prescribing to manage acute and mental health and community care settings,” she says. “It could evolve with organisations, so as an acute organisation takes on a community service. I think integration with other clinical systems and shared care will also play a key role.”

In South Devon, work has already begun on an e-prescribing implementation which will straddle organisational and sector boundaries. A consortium of healthcare bodies has procured a solution which is to be used across mental health, community and acute providers as well as within primary care.

“The staff have really taken it on board, and the nurses really like the fact that they no longer have to keep a drug chart and that everything’s available in one application. Longer term the benefits will come once it’s gone out everywhere, because at the moment you’ve got non-EPMA (e-prescribing and medicines administration) to EPMA transfers.”

Triscribe’s Fraser shares the belief that a situation where e-prescribing sits across a health economy would be desirable. “For me, the nirvana is that from a patient care point of view it becomes an end-to-end thing.

“Our focus is on hospital e-prescribing, that’s our specialty and that’s what we’re good at. And that’s powerful, but what becomes really powerful is when you link that with other systems. Whether that be other systems within the hospital, or linking with GP prescribing – because at the moment one of the big safety issues is reconciling the medicine a patient is on when they come into hospital with what they’re given while in hospital.”

Comments Reggione: “People are now seeing the possibilities of where electronic prescribing fits in, because of the drive for interoperability and medicines being so crucial for the workflow of an organisation. Because people can now see where they can take it and fit it with their clinical pathways, that is what is going to take people to advanced electronic prescribing. Because we will continue to add more features, functionality and, crucially, the integration.”