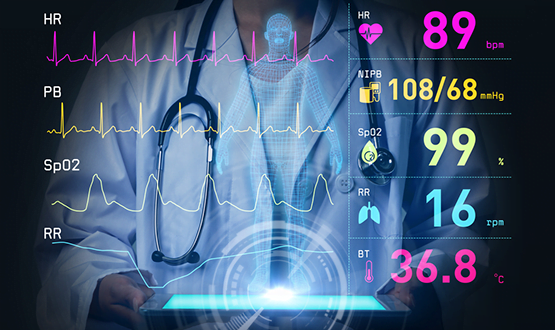 In December last year, the Royal College of Physicians released an updated version of the National Early Warning Score – NEWS 2. It is now being mandated by the government that all acute and ambulance trusts align with NEWS 2 – or risk losing income. With 20% of hospitals still not using the national early warning scoring, how difficult will it be to implement the new system? And how can technology help? Maja Dragovic reports.

In 2015, there were about 60 early warning score systems used in hospitals across the UK. The systems are designed to help staff identify a patient whose condition is deteriorating – the higher the score, the sicker the patient. But the variation in systems is such that a patient’s score in one place might be different in another.

In the West of England region alone, all of their six hospitals used to use different scores.

This was enough of a drive for the West of England Academic Health Science Network to push for alignment in this area amongst the trusts in their region. Within a year – from March 2015 to March 2016 – all of the six acute trusts were using the same early warning score, says Dr Alison Tavares, GP clinical lead at West of England Academic Health Science Network (WEASHN).

The WEASHN was a pioneer in adopting the same scoring system across the acute trusts in the region. Now NEWS 2 is to be mandatory for all acute trusts in the country, with financial consequences attached in the form of a CQUIN (Commissioning for Quality and Innovation) goal.

It will mean the UK is the first major country in the world to use the single language to describe the level of sickness across the whole of healthcare.

“The embracement of that mandate coupled with exciting digital systems will be a bigger cure in terms of lives saved of patients across healthcare than any magical drug, new surgery or new intervention,” says Matthew Inada-Kim, consultant at Hampshire Hospitals NHS Foundation Trust.

This optimism seems to be widely shared, and the changes to the new scoring system welcomed both by healthcare providers and by vendors of electronic observations products.

The three major changes added to the NEWS 2 include changes to scoring oxygen saturation; the addition of new-onset confusion as a point to consider; and a score of five or more being a threshold for urgent clinical action.

The latter is a good safety feature, says David Roots, executive director for Civica’s Health and Care division, because it is alerting junior staff that they should be considering sepsis protocol.

“The quicker you get the antibiotics, the rate of recovery increase hugely. That is an important change.”

New-onset confusion is also met with approval since it further helps to identify patients with sepsis, which is otherwise difficult to spot.

“Patients with sepsis often have a feeling of doom, they think they are going to die, they are very anxious and this can be diagnosed as a panic attack”, explains Dr Tavares at WEASHN, who says there is no doubt her local organisations will introduce the new score.

“We are going to bring NEWS 2 in but before we do, we’re having discussions across all the acute trusts, the ambulance service and the out of hospital clinicians to try and work out the practicality of how we can actually do it.”

Though trusts are still working out their strategies on how to implement the new scoring, most technological providers have already adapted their systems to NEWS 2 – meaning those with electronic observations systems already in place should find the shift a relatively painless one.

“We ensured that our system was easily configurable to adopt this sort of change,” says Donald Kennedy, managing director at Patientrack.

But a tool is only as good as the users using it, points out Richard Garrison, the clinical safety officer at IMS Maxims.

“Hospitals have to make sure that they don’t end up with one department using NEWS 2 and another using NEWS 1 – it’s a whole strategy to put this into place before they can go ahead and adopt the new scoring system.”

There are 79% of acute trusts who are now using NEWS in one form or another, and implementing the changes in those trusts is generally not expected to be a major issue. However, 20% of trusts still aren’t using NEWS and they are the ones that will require most support and help, says Dr Inada-Kim.

All acute health organisations need to be up and running with NEWS 2 by March 2019, otherwise they will miss out on renumeration. The monetary incentive is also being welcomed as an encouragement for organisations to adopt the new scoring system.

“This is important because we want to remove unwarranted variation in care,” says Tim James, clinical lead at Cerner.

Removing variations in care will be hard to do without the use of modern day technology. Having observations recorded electronically ensures that all of the other risks around paper based processes are mitigated, says Debbie Guy from Nervecentre Software.

“Trusts that have put in [electronic] systems have improved their patient safety, reduced unplanned admissions to ICU, and patients who need ICU have a shorter length of stay because their trend of deterioration is picked up in real time,” she reports.

Some trusts still, however, continue to rely on paper. Though with NEWS 2 there are some improvements in the paper format, the potential for human error still exists.

But Jonathan Bloor, medical director at System C, believes we are now getting to the tipping point where it will no longer be acceptable for an organisation to do their observations on paper.

“Particularly when you have drivers around sepsis like CQUIN and doing that stuff manually just gets harder and more onerous when you can’t do it digitally.”

For patients in the community, this is where electronic observations technology comes into its own, says Roots.

“One of the problems with the current community delivery of care is quite often it is based on the old standard care planning which says you get these visits according to this schedule. Not according to how well you are at any particular time. If we could utilise the NEWS score system, the clinical teams who are remote by nature can monitor the observations and progress of the patients and, where necessary, intervene.”

Currently NEWS 2 is only compulsory in acute hospitals and ambulance services but Dr Inada-Kim believes these organisations need to be aligned with the community systems.

“There is an opportunity for whether NEWS 2 has a role in out of hospital. If you’ve got 1,200 ambulance calls in a 24-hour period in the same region, how does the ambulance decide who to go to first without the physiology and perceived risk of death from a score perspective?

“This is where standardised language is really important so that we can triage and guide emergency services to those that need it the most.”

Anne Pullyblank, a consultant surgeon at North Bristol NHS Trust, agrees: “If a patient sees a GP and his NEWS score is five, when that GP calls the ambulance, they’d be speaking the same language and instead of getting a routine ambulance, he’d get an emergency one who would alert the emergency department, and then the patient would be seen in resus and won’t have to wait.”

This is important because it is often difficult to tell if someone is seriously ill, especially young people, adds Pullyblank.

Technology is not a replacement for clinical involvement

Though technology will continue to play an even greater part in vital signs observations, many argue the human touch will never be replaced.

“Clinical intuition is an important element of picking up deteriorating patients – it is not always just about recording the physical data,” says Bloor. “Experienced clinicians will get a sixth sense that something is not right.”

Roots agrees. “The NEWS score and the electronic system are no substitute for looking at the patient and just asking them the question: ‘Are you feeling ok?’”