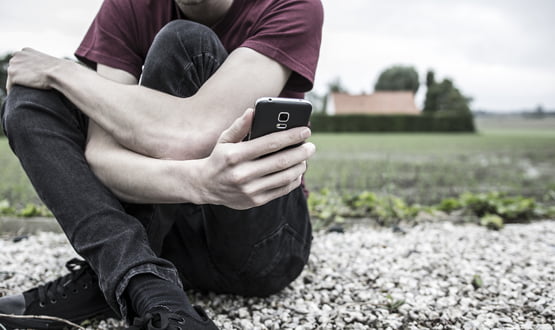 Patient-facing software is being increasingly used to support the quick identification of someone who’s experiencing a downturn in their mental health. Claire Read explores whether patient-facing apps can be used to support earlier and more appropriate intervention in the event of mental ill health.

Chris O’Sullivan has been interested in the potential of digitisation to deliver better mental health for about 20 years – “since the internet was an infant,” he says with a smile.

It’s a period during which, he points out, greater access to digital has affected a multitude of contributors to our mental wellbeing.

“It’s fundamentally changed or developed the ways in which we connect, communicate, find meaning, express ourselves, generate content, expect feedback,” argues O’Sullivan, head of business development and engagement at the Mental Health Foundation.

And he suggests that means a natural conclusion about how healthcare could best be delivered.
“When we are thinking about how we might want to or need to interact with health professionals, particularly in relation to our mental health, there’s a logical expectation that digital might be part of the picture,” he says.

“Smartphones can be a very powerful and contemporaneous tool for enabling patients to make sense of their experiences, and then communicating that to services.”

Growing numbers of suppliers and trusts are trying to make use of precisely that tool. One of the global digital exemplar trusts, for instance, is to imminently launch a mood diary app to support better self-monitoring of wellbeing.

“It’s an app which patients will download onto their own mobile phones,” explains Lee Meredith, product manager at Servelec, which has developed the software.

“It provides them with three main functions: it allows them to view their safety plan, which is the output of consultation and conversation with their mental health professionals; it gives them direct access to emergency contacts; and they can also use the app to record their mood.”

The last of those is not an innovation as such: mood diaries have been an important part of mental healthcare for some time. But they’ve typically been on paper, with all the attendant difficulties.

“Inevitably, when paper is involved you generally lose it or don’t have it when you need it.

“So we really worked at looking at how we can provide a digital solution for this vulnerable group of patients,” Meredith explains.

Importantly, however, the solution is not just for service users. Servelec is best known for its Rio electronic patient record, with which the Mood Diary app will link seamlessly.

“Once the mood has been recorded by the patient, that is automatically stored as part of their clinical record within the EPR system,” explains Meredith.

“Because it is fully integrated to the Rio electronic patient record, if the clinician and the patient have agreed some changes to the safety plan for the patient, as soon as those changes are saved in Rio, those are instantly available on the app for the patient.

“So the patient can walk out of that consultation and everything they’ve discussed, even any changes to the contacts, that’s instantly available to them. It’s really very much about making sure the patient’s got the right information at the right time.”

Adds Vicky Mudd, Servelec’s clinical director and clinical safety officer – and also a registered nurse – “I think what’s becoming increasingly important is that patients take control of their own care. We need to make it easy for patients to be able to tell a clinician exactly what is happening, how they are feeling.”

So the app means clinicians have got instant access to a continuing record of a patient’s self-reported condition. But it also offers a future opportunity for data analysis and, possibly, the development of predictive models.

“The trusts we’re looking to go live with initially, they’re not initially going to be using [the app] for predictive modelling,” stresses Meredith.

“But of course having that digital channel means that we’ve really got an opportunity to really start looking at that on a proactive basis, and provide early intervention to those patients with the overall objective of reducing self-harm risk and suicide.”

At Mersey Care NHS Foundation Trust, these sorts of efforts have already begun. In April, the organisation started to embed a dashboard solution in all community mental health teams.

The Management and Supervision Tool (MaST) analyses data from the electronic patient record and uses an algorithm to determine how likely a patient is to use crisis services in the next 28 days.

“If there are early warning flags, the system makes it a lot easier for us to pick those up, whereas before we might be relying just on the skill of that individual practitioner, the quality of the referral, the ability of the person who presents to the service to articulate themselves,” says Adam Drage, GDE clinical business change manager at the trust.

Up to date assessments

As well as helping clinicians identify those patients with the greatest potential need, it also makes it easier to understand who may be ready for discharge from inpatient care.

“MaST is used by clinicians to help them make decisions about which interventions and which care pathways are most appropriate for people,” explains Caroline Gadd, director at Otsuka Health Solutions, which developed and supplies the tool.

“For example, somebody whose risk of using urgent care services is very low, who doesn’t have other social complexities in their life, actually might be somebody who is ready to be discharged from secondary services back to a more appropriate primary care service, for example.

“Conversely, somebody who is at high risk of using crisis services and has many complexities in their life that may need a more intensive programme of care delivered to them than they’re currently receiving in order to keep them well in the community.”

According to Drage, at Mersey Care Foundation Trust there is early evidence MaST is supporting clinicians to make such decisions.

He says the trust has traditionally had a challenge with patients sitting on case lists indefinitely, with care neither stepped up nor stepped down.

Since launching the tool, back in April – it’s now live for 10,000 patients across around 10 sites and there are 150 trained clinical users – that seems to have become less of an issue.

“There’s a definite correlation between discharges and use of MaST. So there’s an increase in teams that are discharging people back to GP who are using MaST, but you’ve also got a reduction in the re-referrals,” Drage explains.

“Previously people that were discharged often bounced back to services. So not only are we increasing our discharges, but we’re reducing the amount of people that are bouncing back, which indicates MaST is helping to move the right people back to the GP rather than the wrong people.

“The more people use MaST, the more flow we’re getting which means that patients are having their needs met quicker, and we’re able to evidence recovery because we’re ending their involvement once their needs have been met, which is obviously absolutely paramount to an NHS service being sustainable.”

Sustainability is, of course, the backdrop to so many conversations about healthcare digitisation. O’Sullivan, from the Mental Health Foundation, is another who sees the potential of digital mental healthcare solutions to not only improve patient care but also the bottom line.

“The benefits of being able to establish self-management using digital tools that are two way between clinician and individual, and potentially also their families or other people in their network, are going to be really, really high to those people,” he argues. “But also if we’re talking about cold, hard cost, in terms of the prevention of hospitalisation and other service use, the argument is definitely there.”

The challenge, he suspects, will be “access and palatability for professionals” when it comes to digital solutions. It’s a point echoed by Otsuka Health Solutions’ Gadd, who emphasises that the algorithm within MaST was very developed in collaboration with an NHS trust, and academically validated with the biomedical research unit at South London and Maudsley NHS Foundation Trust (SLaM).

“I think whenever you’re talking about something that could be classed as AI or has a predictive element, actually the biggest barrier you need to overcome is clinician mistrust of that data,” Gadd says.

“I think really involving clinicians from the very beginning, and making sure that they understand the methodology and the algorithm – not putting it in a black box so that they literally just get an input and an output – helps to build trust.”

And if that trust can be built, Gadd is certain there is considerable promise that can be realised. “I think it’s a really exciting future for using digital health to improve mental healthcare,” she concludes.