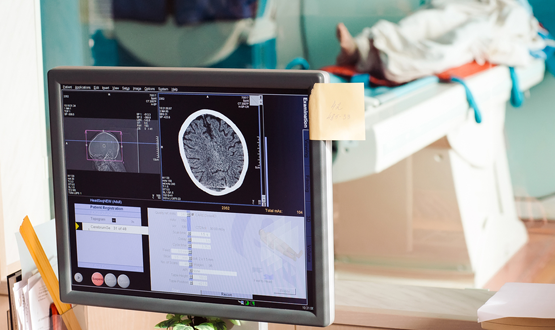 As an oncologist of many years, Jeanette Dickson remembers life before PACS. She describes a world of giant envelopes filled with ill-sorted and often elusive, difficulty in comparing images – and the ever-present risk of smarting fingers from paper or film cuts. The difference that PACS has made to her and to her colleagues has been stunning.

“It means that when I want to see an image, I don’t have to rummage around in a big package of films,” she says simply.

“It used to be that if I was doing an out-patient clinic, and Joe Bloggs came in, I had to find his packet of films amongst the ones that had been pulled for the clinic – if they had actually been found.

“I then had to wrestle the images out of the packet, work out which ones were relevant – because you’d assume that they’d been filed in a sensible order, but sometimes that wasn’t the case – so you’d have to sort through them and put them up on a screen to look at them.

“Then you’d have to check what sort of images Joe Bloggs had before, and bring them out and compare them.

“Today, the quality of the image I can see is much greater, I can see the history of what the patient has had much more easily, I can compare the two side by side on a digital rolling process. You can allay anxiety quicker; you can define a future pathway for the patient.”

Dickson, who is president of the Royal College of Radiologists (every third term the president is a clinical oncologist, reflecting the fact that it is also the training and standard-setting body for that specialty), is at the sharp end when it comes to wanting technology to work seamlessly. And by any reckoning, PACS (picture archiving and communications system) has been a success story for healthcare IT.

Across the UK, clinicians like Dickson, quietly get on with the day job which is made so much easier because of instant access to high quality images. This also is a benefit to patients, because the team has access to the best possible information to aid in decision-making.

Or at least that’s the theory. While PACS itself has been embedded in well, with many organisations on their second or even third procurement, other factors can sometimes prevent the technology reaching its full potential.

The Royal College of Radiologists highlighted some of these factors back in December when it wrote to the new prime minister urging him to prioritise and boost funding for five top areas having an impact on NHS imaging and cancer care.

As well as calling for more staff, better facilities, and reassurances around Brexit, the college put the case for a rolling programme of investment in technical equipment (including machines and software).

It also called for enhanced IT, pointing out that “patient information often can’t be shared between services quickly because of the NHS’s old, disjointed IT” and warning that “IT connectivity must be enhanced so that all data, including imaging, follows patients wherever they go”.

None of this is news to anyone closely involved in the healthcare sector, be they clinicians, suppliers or those working in NHS technology teams.

Connectivity is inextricably linked with realising the potential of PACS, yet too often this isn’t made explicit, even when making a business case for the necessary financial investment.

“In many ways, PACS is so good, and the other things that would make it go from good to great aren’t really PACS issues, and they aren’t really talked about in the same conversation,” Dickson says.

“For example, connectivity of imaging is really about the networking of PACS systems, but if you’re talking about connectivity you often don’t say ‘and the PACS needs to be networked’.”

The college has been at the forefront of efforts to create radiology networks, but she concedes that much more needs to be done.

“We firmly believe that the more connectivity there is among radiology imaging the better that is for patients, so that there is access to images wherever they are,” Dickson says.

“The main thrust of radiology networking is to look at can you provide an expert opinion for a very specialist group in a time when you may have only one person in your trust who has a specialty interest in looking at brain MRIs, for example, or for imaging of children, and they go on holiday and are off sick, and you want a second opinion.

“We know the workforce is spread very thin and the networks provide a way for complex opinions to be accessible without moving the people.

“Moving the images is always easier than moving the people – or should be. I think that’s what networks so, and they also allow you provide and an out-of-hours service that is more efficient – instead of three people being up for half the night, you have one person who is up all night, which frees up time within the working week for other people.”

“While many hospitals have put PACS in, and they’re operating efficiently, their ability to have access to the expertise, which is often locked up in tertiary referral centres, or in regional paediatric units, for example, or regional oncology or neuro units – isn’t always there,” McCaffrey says.

“You can get the images back and forth to them, but there are many parts of the UK where we’re not operating in a way that can facilitate cross-site reporting, cross-site scheduling, and cross-site vetting.”

It is working well in pockets of the country, such as Cheshire and Merseyside, and Scotland, McCaffrey adds: “There are more and more popping up. North West London is another example where they’re wanting to optimise the reporting capacity across a number of hospitals.”

McCaffrey believes the move towards imaging networks opens up the potential of having groups of hospitals collaborating, enabling reporting to be optimised across these wider geographical patches.

There must be a recognition that investment in infrastructure may be required to make collaboration work, however.

“For example, they may have different numbering systems across the hospitals and the chances are the individual RIS systems are customised to that specific site’s requirements,” he says.

“Once you start working in a truly networked way you have to start implementing standard ways of reporting, you have to have standard ways of cross-site charging to make sure that whoever’s done the reporting, the charge goes back to the appropriate hospital. We’re achieving a lot of that through standards, fortunately, but not all NHS trusts are joined up on that, so that’s what we’re looking at networks to do.”

McCaffrey hopes the move to networks will lead to better collaboration more generally, including on procurement.

There must, he adds, be a realistic appreciation of the fact that appropriate investment is needed to help services deal with the demands of today, and also of the future. This includes understanding that the pressure on infrastructure will only grow as health services become better at digitising and moving data.

“In general terms image transmission services have been working for many years with point to point connections with increasing speeds through from N3 network to HSCN,” says McCaffrey.

“We’re now putting more and more data down these wires, so there is sustained investment still required in those underpinning infrastructures. For instance, if you start pushing pathology images around, that takes up a new dimension of bandwidth.”

Going back to the idea of networks, Dickson says that the networks have the potential to improve collaboration on patient care, and as a peer-support tool for clinicians.

“Some people have been early adopters and some people have had the ability to persuade their trusts that sharing data in this way is appropriate, and some places have not had that agreement to share,” she says.

There are also issues to work out in terms of clinicians’ responsibility for providing an opinion or service for organisations that don’t directly employ them, although this is not insurmountable, she says.

She admits that all these years ago, she and some of her medical colleagues were slightly apprehensive about the introduction of PACS, worrying that it would “break down” or go wrong and leave them without even the prospect of an elusive film to help with decision-making.

“Of course there were some teething problems, but in general it’s been massively brilliant news – for doctors, but also for patients. Now we want to see it move from good to excellent, and that will take sustained investment,” she says.