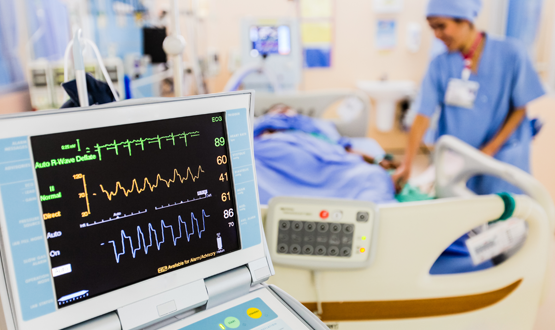 Electronic observations of vital signs give clinicians a quick indication of how healthy their patient is. Claire Read investigates how the technology has been used during the Covid-19 pandemic.

It’s over a decade since Professor Mohammed A. Mohammed began researching the value of early warning scores in identifying deteriorating patients. In the past few months, however, it is work which has taken on a new angle and urgency.

That’s in part because at York Teaching Hospital NHS Foundation Trust – which has been testing a risk equation developed by Mohammed and colleagues – something important has emerged.

“The risk of death for a Covid patient for the same NEWS [National Early Warning Score] seems to be much higher than for non-Covid patients,” explains Mohammed, who is professor of healthcare quality and effectiveness at the University of Bradford as well as a principal consultant to Midlands and Lancashire commissioning support unit (CSU).

“A NEWS score of five has an order of difference in terms of risk of dying for a Covid patient as opposed to a non-covid patient.”

The finding absolutely does not negate the value of early warning scores, which have been introduced across the English NHS – generally in the form of the National Early Warning Score, now in its second version.

Indeed, the research of Mohammed and of others has proved that such scores – calculated by allocating a score to a patient’s vital signs (breathing rate, oxygen saturation, blood pressure, pulse, level of consciousness and temperatures) and then adding it up to form one overall risk figure – can help clinicians spot patients who are seriously ill.

“The implementation of early warning scores, and the fact they’re widely used, is a fantastic achievement in its own right for the NHS,” stresses Mohammed.

And, in many instances, those scores are being calculated with the assistance of a computer. Digital Health Intelligence research shows 100 out of England’s 141 acute trusts – 71 percent – now have an electronic observations system in place.

In these organisations, nurses enter vital signs data into a computer system which automatically calculates the early warning score rather than making manual records on paper. Some hospitals even have smart devices which automatically take readings and enter them into the electronic observations system.

Addressing the new challenge of Covid

What the situation at York does indicate, however, is that covid presents a new challenge for scoring and for electronic vital signs setups. In short: does the value of the National Early Warning Score for such patients need to be reassessed and, if it does, could electronic systems help?

For Dr Ewan Carr, research fellow at King’s College London’s Department of Biostatistics and Health Informatics, the answer is yes to both questions. He and colleagues are working on a paper evaluating NEWS2 as a risk stratification tool for covid patients.

“Our initial findings suggest that NEWS2 on its own is not very good in terms of sensitivity for detecting the risk of severe outcomes in these patients,” reports Carr.

That assessment is based on a study of almost 1,500 covid patients King’s College Hospital NHS Foundation Trust in South London since April. “The study was made possible by existing infrastructure that we have to rapidly extract and process information from the records there,” explains Carr. CogStack is an open source data extraction platform developed by researchers at the NIHR Maudsley Biomedical Research Centre.

Adds Carr: “I think that’s partly why we were in a good position [to be able to do such work] because those linkages and that infrastructure was already in place.”

The dataset includes information on vital signs and early warning scores is because King’s began moving to electronic observations back in 2012. It means that, at the click of a button, clinicians in the organisation can get a picture of their most seriously ill patients – and that researchers like Carr have access to an enormous quantity of ‘clean’, structured data.

For vendor System C, research is a key element of their e-observations work. Dr Jonathan Bloor, the company’s medical director, says it is currently working with Alder Hey Children’s Hospital NHS Foundation to look at the evidence base for e-observations in paediatrics, and with the Nuffield Trust looking at trends in electronic vital signs data over a 10-year period and how that might inform policy.

He has little doubt the company will, in due course, get involved in coronavirus research. But Bloor also emphasises the immediate value of e-observations – which at System C sit as part of its modular CareFlow EPR – to the ability to care for covid patients.

“Covid’s changed everything for hospitals, and it was quite interesting looking at what our customers did, particularly the ones that hadn’t yet quite rolled out our e-obs solution,” he says.

“If I use North Bristol as an example, they made a decision through their gold command to deploy across all adult wards and did this in a period of 10 days as part of preparation and response to coronavirus.

“I think that’s pretty telling around the importance of e-observations in helping them manage and cope with a new illness. Those organisations that remain on paper doing observations just haven’t had the benefit of what e-observations brings – an understanding across a whole organisation of what’s going on with deteriorating patients.”

At Cerner UK, there is also certainty that e-observations systems are a key tool for staff caring for patients with covid. But Tim James, health care executive at the firm, says the virus is also proving the value of combining NEWS2 data with other information in a way that almost moves towards predictive analytics. This, he says, is made easier when electronic observations sits as one element of an electronic patient record.

“One of our clients, Chelsea and Westminster, is taking the data from the EPR – which is capturing all those vital signs as well as diagnoses and so on – and determining, OK, if you turn up in the A&E and you’ve got high blood pressure and you’re young and you’re male, you may potentially be going to deteriorate,” he says.

“It’s not just about the EPR and integration of early warning scores now – it’s moving into let’s take that data, put it through some modelling, and do some predictive analytics.”

Both Mohammed and Carr’s research shows that adding more elements into the calculation of the National Early Warning Score increase its usefulness and potentially make it better at predicting mortality as well as deterioration.

But people working in this area – researchers, clinicians and vendors alike – are aware that one of the most powerful elements of NEWS is that is a standard used in all cases and is easy to calculate. It means there’s a widespread reluctance to overcomplicate matters (though were the calculation methodology to change, it would be very easy to implement in a system which works out the scores automatically).

In any case, says James, there have always been patients for whom early warning scores are known to be less sensitive. As a paediatric intensive care nurse, he says he’s frequently cared for children with congenital heart disease who he says will always have a below average oxygen saturation and so who are likely to have a NEWS score which will consistently suggest cause for concern – but which skilled clinicians will know is par for their particular condition.

It demonstrates that, while e-observations and computerised early warning score calculations are a significant aid, they do not replace clinical skill. “The algorithms aren’t perfect and so you’ve still got to have processes that don’t interfere with clinical intuition working alongside the algorithms supporting the clinician,” argues System C’s Bloor.

He sees improvement of such algorithms and a move to greater integration of data such that predictive analytics becomes more possible as the definite future. For now, he argues, “there’s still plenty of stuff to do with getting ubiquitous e-observations across the NHS.”

But Bloor is optimistic on that front. “I hope covid will accelerate the implementation because it’s getting to the point where it’s almost unacceptable for observations to be done on paper. I think some of that learning may come out of the last three months,” he concludes.

The idea of the NHS offering more options for remote consultation and more care outside hospitals is far from a new one. But with Covid...