For this month’s column, I was offered a more hands on approach to virtual reality. The team at Bournemouth University’s Orthopaedic Research Institute invited me down to have a go on their technology and see how I fared at being a surgeon.

In the BUORI lab, I got my hands on a hip and shoulder virtual reality simulator. And having done that, it’s safe to say I shouldn’t give up the day job.

Sitting down with Rob Middleton, head of the institute and a professor of orthopaedics, and Tom Wainwright, his deputy and associate professor in orthopaedics, I also learned how this disruptive technology will fit into future surgical training – so those people who should have day jobs as surgeons get to be good at them.

The Swiss company, Virtamed, is behind the key-hole surgery equipment. A fake limb, in this case a knee or hip joint, is placed onto the machine, and the user can then practise the operation by using tools and watching visualisations on screen.

While I was set on a ‘beginner’ level practice meniscectomy – which meant I got to hack away at a torn meniscus through guided steps – Jop Antonis, a Dutch orthopaedic surgeon who is a research fellow at BUORI, was competing on a different level.

Describing the knee arthroscopy as 95% like reality, Antonis highlighted how it’s possible to add complications and bleeding to practise stressful operating conditions.

The technology for open surgery on the knee is delivered by the Canadian Ossim Technologies. Holding the “drill”, when I cut through the “bone” I could feel the vibration in my hands; as well as seeing it on the computer screen.

It felt pretty real to me. However, this technology is at a more formative stage than the knee arthroscopy, as Antonis explains. “The hardest bit is the placement of the jigs”, he says, but in the simulation these are placed automatically. 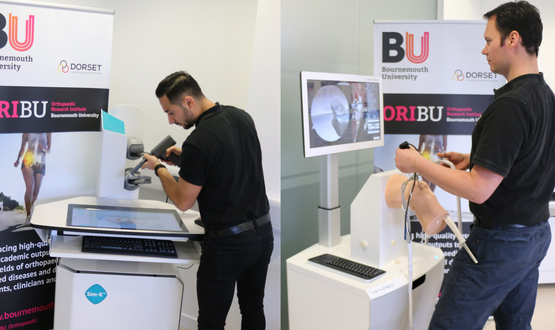 Surgical training still looks remarkably traditional. There continues to be an apprentice model, in which trainees shadow consultants, a process that usually lasts between three and nine months. With the virtual reality set-up, trainnees can come in at any time; and, of course, there’s no risk to the “person” being operated on.

“What the virtual reality means is that I can train the surgeons outside the operating theatre,” Middleton says. “They can come along and there’s no risk to patients.

“The learning curve is much reduced, and when I take [trainees] to the operating theatre, they are several steps up the ladder.”

In addition, he adds, it makes it easier for doctors to keep their skills up to date by practicing operations they may not see regularly. The software records practice and can be exported, so Middleton and other experts can provide feedback.

Wainwright thinks that change in surgery itself will make virtual reality an even more appropriate vehicle for training.

“The field of direction is only going in a way that’s going to lend itself to virtual reality training.”

At the same time, more and more operations are being done as keyhole surgery; which opens up a role for virtual reality to give surgeons experience of open surgery on the rare occasions they need to conduct it.

“Virtual reality may be very important in open surgery in the future, because so few surgeons will have got that much experience in it”, he prophesises.

A core part of the institute is its research output, as its name suggests. Wainwright describes how BUORI is establishing the validity of the simulators, with the aim of establishing itself as a source of validation expertise.

A lot of research is also underway on what is being produced by companies and whether it is cost efficient for the NHS to invest in the technology.

“It’s really getting that conversation and connection correct between the industry partner, the actual health service, and people who will be using it,” Wainwright says. “And then [putting it] within a research setting which proves it is a benefit.

“The NHS being as strapped for cash as it is, it has to come down to whether we can prove the efficacy and the cost of it.”

BUORI has provided feedback to both Virtamed and OSSIM Technologies on their software, with the aim of getting all products up to the level of the knee arthroscopy. Middleton describes the relationship with companies as good. “We’re not threatening to them; we’re a non-profit making organisation.” 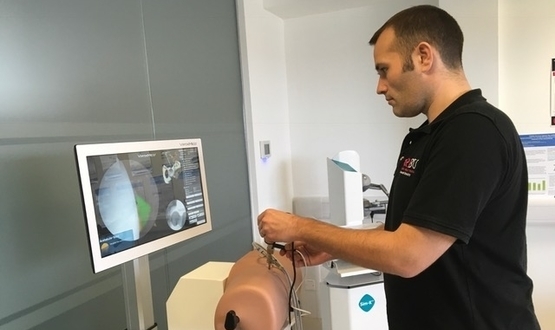 Middleton estimates that to set up a teaching room for virtual reality with support staff and equipment costs around £200,000 to £300,000.

“It’s not practical for most hospitals to have”, he says, so “one of two things will happen: either you’ll have hubs where people come or the cost of the technology will decrease dramatically, so more places can have it”. Middleton reckons that it will be a mixture of both.

The equipment, salaries and technology at BUORI have been partly funded by Dorset Local Enterprise Partnership and the Wessex Academic Health Science Network. “Capital is relatively easy to get, what is very difficult to get is to get the money to pay salaries to use the equipment,” Middleton says.

Future of this formative technology

The disruptive power of virtual reality is not only going to make a difference to surgeon’s training, but also in the patient’s relationship to surgery.

Virtual reality may also have a role to play in tackling the suing culture that is creeping over from the US, as the virtual reality trainer could prove why a surgeon took the decisions they did, after practising first.

For Middleton, though the power is really in the training. “Why would you learn on a patient when you learn on this? There’s no point, really.”

Clatterbridge Cancer Centre went live with a Meditech EPR in May, becoming the first trust to implement the oncology module. Laura Stevens went to see...