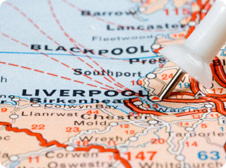 London’s black cab drivers are known for their willingness to share their opinions with passengers, but they have nothing on Liverpool’s cabbies.

“Look at this,” yelled a driver heading for Lime Street station from Liverpool’s conference centre, after hearing that it had been playing host to a big NHS management conference. “It’s a disgrace.”

Still driving, he held up a copy of the Daily Mail, which was “furious” about Rose Gibb’s £190,000 pay-off from Maidstone and Tunbridge Wells NHS Trust, where she was chief executive when it suffered “Britain’s worst ever super-bug outbreak.”

“Anyone who kills people like that should be sacked. They shouldn’t get a penny,” the driver added, throwing down the paper to negotiate a multi-lane roundabout.

His anger, however, did not extend to the local health service, which is being reorganised around a polyclinic model. “It’s great,” said the driver of his local hospital without beds. “It’s really big and it’s got all the latest equipment and everything.”

Similar plans for London foundered on access. So are these wonderful centres easy to get to? “Oh yes. I just walk ten or 15 minutes down the road and there it is.

“They have these new mobile chemotherapy units as well, so people don’t have to come across the water [the Mersey, which divides places like Birkenhead and Runcorn from Liverpool’s hospitals]. It couldn’t be better.”

Interoperability is a very big word

This unexpected enthusiasm is a tribute to Liverpool Primary Care Trust, which has been working to improve the city’s health services for some years.

Its work is now coming to fruition, with building underway or plans in place for three neighbourhood treatment centres supported by 22 hubs that will house GP and primary care services and carry out some of the work previously carried out in the acute sector.

Earlier this month, health secretary Andrew Lansley also reconfirmed plans for a £451m, 643 bed hospital to replace the Royal Liverpool University Hospital, which were first signed-off by his predecessor, Andy Burnham, in March.

All of these changes have been underpinned by IT. “We wanted IT to support the changes from the outset,” Dr Simon Bowers, a GP and IM&T clinical lead, told a local conference as the NHS Confederation’s annual event got underway in the city centre.

The solution was to use EMIS Web to give staff access to the information they needed to carry out particular tasks from within the systems with which they are already familiar.

“A couple of years ago, we sat down and looked at what was available and nothing [the National Programme for IT in the NHS] was bringing out was going to help us,” Dr Bowers added.

“So, we talked to Kate [Warriner, the trust’s deputy head of IM&T] and told her what we wanted and what our hospital colleagues wanted. And then somebody from EMIS introduced us to this word interoperability.”

Sorting out sharing and consent

The Liverpool Interoperability Programme started by supporting out-of-hours services by creating summaries that can be shared between Emis systems and Adastra’s out-of hours-system.

As well as overcoming technical challenges, this established some of the basic principles for the work that followed. For example, it demonstrated the need to get clear information sharing agreements in place and to sort out confidentiality and consent issues.

The Local Medical Committee signs off all sharing and confidentiality agreements and so do GPs. A publicity programme has been run for patients, who must consent to information being shared every time this might happen. As far as the PCT knows, nobody has ever refused consent.

Warriner told the conference that “because everything we have done has been because of demand from clinical colleagues… some of the things we thought would be really difficult, like getting agreement for data sharing, have been much less difficult than we expected.”

The interoperability programme now covers 13 primary care services, including the city-wide minor surgery that is being carried out in those health services and hubs, new community joint injection, anti-coagulation and dermatology services, and those mobile chemo units.

It has also given community matrons working in local nursing homes access to the full GP record about their patients. Paula Hibbert told the event about the difference this had made to her ability to support 250 patients across six nursing homes.

“Before EMIS Web, on a typical day, five of my homes might ring because there was a problem with my patients and it was a logistical nightmare,” she said. “To get the information I needed, I would have to ring three or four practices and then wait for the receptionist to fax over some information.

“Then, I might find that a patient was breathless and I would have to go to the GP to find out why. He might tell me there had been a medication change that explained it. With EMIS Web, I get access to the whole patient record. Also, I know if an issue I have raised has been dealt with, and it all feels a lot safer.”

EMIS links up with System C

More recently, the programme has extended to acute care. On the day of the iLINKS conference, EMIS and System C issued a joint press release announcing that University Hospital Aintree had done live with a project to give staff working across its urgent care services access to information in GP systems.

They argued this should deliver a number of benefits, such as reducing the time it takes clinicians to obtain medication information, reducing the number of tests that are carried out (since hospital clinicians will be able to see the results of tests ordered in primary care, instead of automatically ordering their own), and streamlining the discharge process.

“The idea is that if you are admitted in crisis in Liverpool the people treating you will be able to see your record,” said Dr Bowers. “We were asked if we had any evidence to prove this would be a good thing and we said we did not have any, but we would see if we could get some, and we did not see how it could make things worse.”

The PCT is undertaking a benefits realisation programme. However, chief executive Derek Campbell said he was also convinced that technology enabled change will be vital if Liverpool is going to be able to cope with the coming funding crunch by delivering on the Quality, Innovation, Productivity and Prevention agenda.

All 13 organisations in North Mersey are working together on QIPP and looking to make savings of £400m on their £2.2billion budget by focusing on streamlining nine patient pathways.

Shaun O’Hanlon, EMIS’ clinical design director, showed the event how pathways could be built in EMIS Web so clinicians are prompted to follow them as they use the system as part of their day to day work. The interoperability programme will do its bit by giving clinicians on the pathway access to relevant information.

Preparing for the future

“It is a big job, but it is the day job. It is the job we should all be doing because otherwise we will be in crisis next April,” Campbell said. “We have been told that the NHS will have real terms growth in funding, but with pay frozen the government could argue that inflation is nothing.

“If that’s the case, we cannot just salami-slice our way out of trouble. We need to do QIPP and we need strong information systems to do it. We cannot do it without a shared record for every nurse and every doctor and everybody they deal with.”

Lyn Whitfield reports from Liverpool on an NHS Confederation conference pre-occupied by the entrance and exit of GP commissioning and primary care trusts.