A fact-finding trip to Seoul has left Joe McDonald contemplating the quality of freedom and privacy back in the UK, and the difference between placing your trust in the citizen or the state. 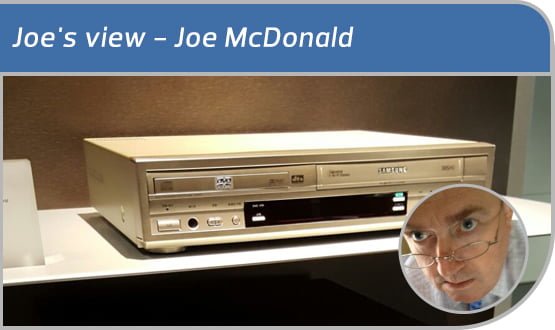 Samsung DVD/VHS player: on the horns of a dilemma?

At 35,000 Feet above Moscow a little turbulence rattled the ice in my gin and tonic as I reflected on my visit to South Korea and in particular the museum in Samsung’s Global Headquarters in Seoul. South Korea is a remarkable country full of remarkable, resourceful and charming people.

The country has gone from the third world to first world economic powerhouse in just 40 years, “The Miracle on the Han River” they call it. Meanwhile just 35 miles to the North, the people of North Korea remain oppressed, frequently hungry and devoid of basic human rights.

My mind went back to the pictured exhibit in the Samsung museum, a combined VHS and DVD player which clearly captures a tipping point in the history of video technology and also how nimble Samsung are in their product development. Not sure which way the video market is going to go? Doesn’t matter, we’ll design another one in 3 months when we have a better idea.

The freedom versus state oppression and central planning. No contest.

I was a little disappointed to find no wifi on board the flight so I couldn’t work during the 12-hour return trip.  Never mind, plenty of inflight entertainment was available. By the time we were over Moscow I’d already watched Bridget Jones’ Baby (not bad) and a re-make of The Magnificent Seven (why would you do that?).  I didn’t really fancy ‘Snowden’ but, hey-ho, still many hours to go.

‘Snowden’ is a biographical film of the events surrounding Edward Snowden, a young CIA agent who became disillusioned with the work of the NSA and eventually blew the whistle on America’s widespread intrusive surveillance operations which allowed government access to citizen communications on a massive scale. Snowden fled from Hawaii with material stolen from the CIA and went to Hong Kong where he shared all of the embarrassing truths with the Guardian Newspaper and then the world.

The resulting revelations sparked massive global outcry at industrial spying on their own citizens by the US and UK and renewed demands for citizen’s right to privacy and not be spied on by their governments.

Those in the know, started to put Elastoplast over the webcam on their laptops, as Mark Zuckerberg famously did. Oliver Stone’s direction of the film leaves the viewer in no doubt that Snowden should be regarded as a hero but the fact that Barak Obama’s government issued a warrant for his arrest as a traitor would suggest it is not quite as black and white as Stone would have it.

Here in the UK the backlash of mistrust caused by our government’s complete disregard for our digital privacy rights, together with playing fast and loose with consent, helped scupper the Care.Data database, and has seen NHS Digital have three re-brandings in as many years.

And it turns out that the concerns of privacy campaigners about use health data by government agencies for purposes that have nothing to do with health were spot on.

NHS Digital’s former chairman is having his own ‘Snowden’ moment. The story quotes former NHS Digital Chairman, Kingsley Manning, stating that he felt pressured into releasing patient data to the home office at a scale of 10,000 patients per year, largely used to track immigrants.

He is also quoted as saying that new arrangements announced last month “maximise Home Office powers to the absolute Limit”.

It strikes me that we have spent 10 years arguing the toss about privacy and consent models, maybe we are at the tipping point now where we have to choose which way to jump. VHS or DVD? North or South Korea?

Will the citizen become more and more relaxed about sharing their health data over the coming years, after all they’re letting it all hang out on Facebook and Twitter, right? We can just pass legislation that lets us use patients’ anonymised patient data however we want? If the Home Office want access to NHS data that’s OK, right? The innocent have nothing to fear, nothing to hide, right? Democracies always elect reasonable people, right?

It seems unlikely to me. A generation of digital natives is growing up who understand privacy, they’ve seen ‘Snowden’, he is a heroic figure for them. They have seen Zuckerberg’s Elastoplasted webcam and they look up to him. They are going to get more passionate about privacy, not less.

They’ve had their identity stolen, a card cloned, been fraped, trolled and they can explain two factor authentication to their parents? NHS Digital cannot afford to slip up with another approach to patient data from the Donald Trump school of seduction and ‘truth’.

We are, I think, at a tipping point alright and the next chief executive of NHS Digital will have to play a key role in deciding which way to go.

Can NHS Digital become the guarantor of patient privacy?

Is NHS Digital to be the champion and guarantor of information and data as the essential lifeblood of patient-centred, personalised health and care?

Will the next leader of NHS Digital ensure the organisation’s driving purpose is about empowering the individual to control their data and who gets to see and use it?

Or will NHS Digital be more statist, primarily inward looking, serving the health system and other arms of government.  The agency clearly has a vital role to play in terms of providing data required for research, planning and operation of the health and care system, but how should it weigh these responsibilities against the rights of the citizen?

It’s a tricky balance, but might we get a leader who can deliver both for the nation and the individual citizen? Only if they understand that the secret of consent is to get consent.  Freedom versus state oppression. No contest. Right?