Kettering struggles with radiology backlog after IT deployment

A Midlands regional digital radiology service is being blamed for a massive reporting backlog that has harmed at least one patient.

Kettering General Hospital NHS Foundation Trust says thousands of reports has been delayed since a new radiology and PACs system was deployed in June, 2016.

In its board papers, the trust said the backlog in CT and MRI scans had led to 68 cases of potential patient harm. So far, the trust had identified one confirmed case where the delay has caused patient harm.

The trust is part of a seven-trust consortium, called East Midlands Radiology (EMRAD), that are planning to share a single radiology service.

In January 2015, the trusts reached a £30 million deal with GE Healthcare to act as the main contractor for this service. This includes cloud-based picture archiving and communications system, radiology information system and a vendor neutral archive.

So far, not all of the seven trusts have deployed the service but several that have, have also reported problems.

A Kettering spokesman told Digital Health News that since its go-live in June last year, “a number of technical issues associated with the implementation affected the level of radiology reporting and contributed to a reporting backlog”.

He said that after “some significant support from EMRAD” the technical issues were resolved in early October.

The system was now more stable and the turnaround on image processing had improved significantly, he said.

The January board papers said the trust was dealing with a radiology backlog before the deployment. However “since the introduction of the new system this has been further increased”.

The report said there were currently about 9000 reports that have waited for more than 10 days. 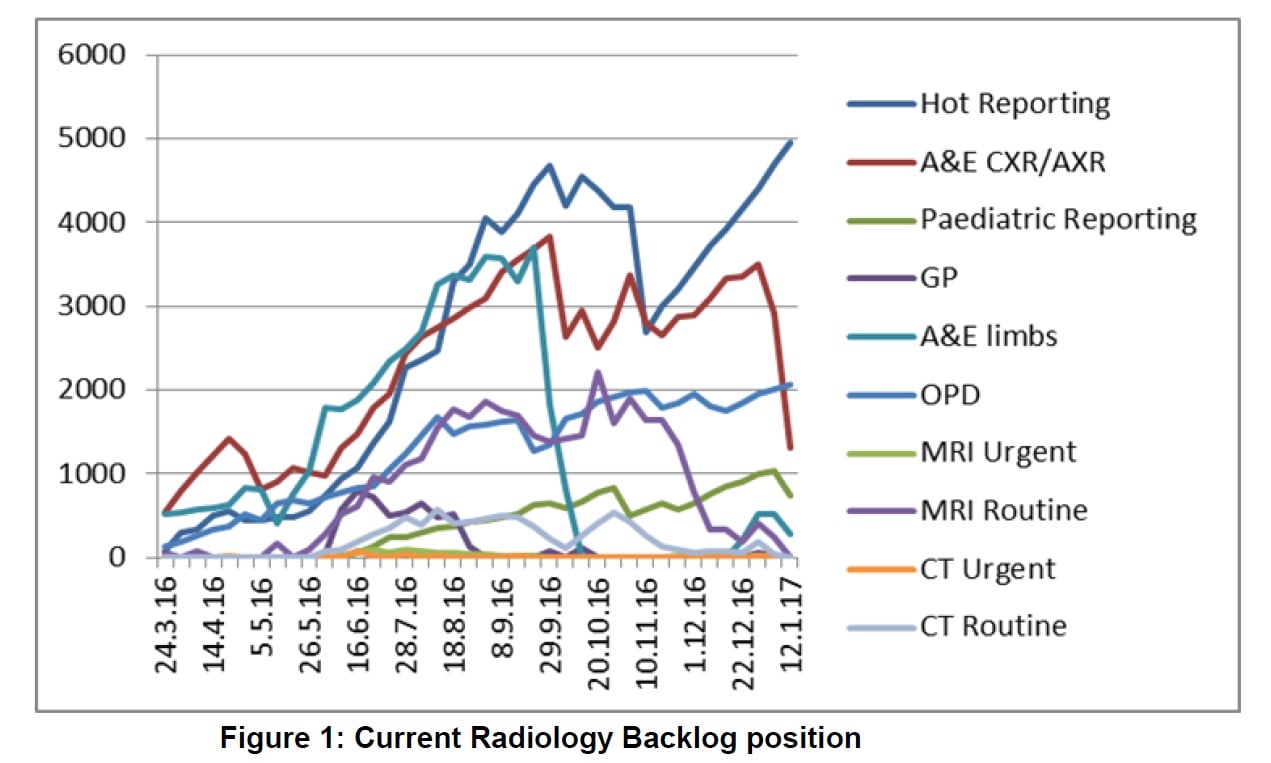 This graph shows the radiology backlog position as of January, 2017. Hot reporting is when the reporting is completed before a patient leaves. Source: trust board papers

Routine MRI and CT backlogs have now been cleared, and “there have been significant improvements in turnaround times for urgent and cancer MRI and CT scans”.

In the December EMRAD update, the trust said the backlog would be cleared by January 2017. However, a trust spokesman said plain film reporting was not expected to be cleared by March 31.

Radiology problems in December include 502 errors that required a server reboot.

In its January board papers, Leicester said the installing the new service “resulted in a system failure” within imaging service, preventing reporting for several weeks.

At Lincolnshire, there were “significant challenges surrounding the transition to a new PACs system, as has been encountered across the region”, according to trust’s December board papers.

Chesterfield is scheduled to go-live with the service on 4 March.

GE Healthcare also had problems with its radiology system in the Kent and Medway consortium. In August last year the RIS suffered a hardware failure which led to a significant backlog.

In 2013, Imperial College Healthcare NHS Trust experienced severe problems with its GE Healthcare radiology information system, forcing it to halt its roll-out. In 2015, the trust tendered for new digital imaging.

GE Healthcare also said that the system has been stable since the beginning of October, and that the company had “worked closely with Kettering prior to that to offer IT and technical support”.

Digital Health Intelligence maintains a database of the administrative and clinical systems in use at trusts, and uses this to calculate a clinical digital maturity index score for them (log-in required). Kettering General Hospital NHS Foundation Trust has a score of 57 and is ranked 144 (out of 153 acute trusts).