Disruption to services continues at trusts after Friday’s cyber-attacks

The cyber-attacks which started on Friday afternoon, and caused havoc across the NHS over the weekend have continued to disrupt services to some degree at 12 trusts, with most now making progress to returning to normal

With a reported one in five trusts affected, Digital Health News gives a round up of ongoing disruption to English NHS trusts as at the end of Monday afternoon.

Barts has been severely affected by the on-going global cyber-attack. From Friday to Sunday it was diverting ambulances, and there were no outpatient appointments on Saturday.

On Monday, Barts said that it continued to experience IT disruption, but that trauma and stroke care is now fully operational. In a statement, the trust said that it will be running a reduced service on Monday and Tuesday.

Barts, the largest trust in England, has a had a string of IT incidents this year already with a huge IT failure affecting its pathology and imaging systems and other critical clinical systems leading to disrupted services and cancelled appointments in April. In January, Barts was hit by a IT attack and shut down parts of its systems as a precaution.

Blood tests are severely disrupted at Mid Essex Hospital Services, a trust that provides acute and community-based services from four sites in and around Chelmsford, Maldon and Braintree.

In a message on its homepage, the trust says that “all blood tests at Broomfield Hospital (Chelmsford), St Michael’s (Braintree), St Peter’s (Maldon) and Christchurch (Chelmsford) are unavailable until further notice” on Monday afternoon.

Southport and Ormskirk cancelled all outpatients and endoscopy appointments on Monday and Tuesday, along with routine MRI and CT scans. The northern trust also asked that surgery patients do not attend unless contacted directly for both days.

The trust, which provides hospital and community-based services to 258,000 people across Southport, Formby and West Lancashire, said in a statement that dialysis and blood clinic patients should attend as per normal.

The Essex trust’s Harwich Hospital had to cancel its outpatient appointments and postponed some routine appointments. The BBC reported that 25 operations have been cancelled today.

East and North Hertfordshire was still not providing a service for non-urgent blood tests at the Lister Hospital, New QEII or Hertford County hospitals on Monday, and diabetic eye screening service was still not running.

A message was splashed across the trust’s homepage said that “good progress” was being made, but asked the public to be patient. 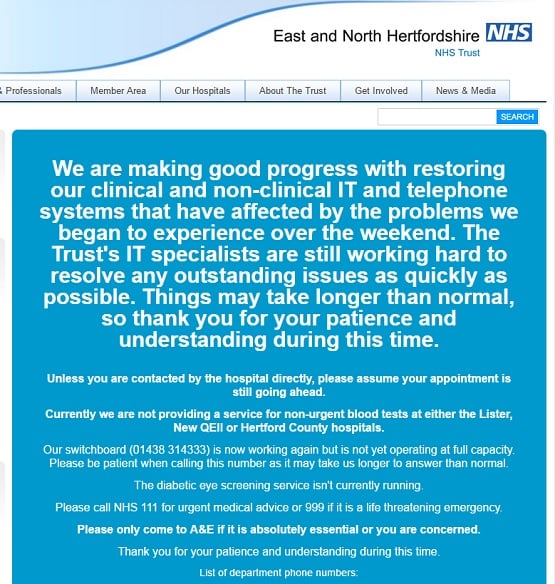 On Monday, the James Paget University Hospitals were working through backup plans with “most surgery and outpatient appointments” going ahead, according to a Facebook update on Monday mid-morning. A spokeswoman confirmed that patients were told to come in as normal, unless they have been contacted otherwise.

Like the majority of the trusts affected, it said A&E was dealing with emergencies as a priority.

North Cumbria had to postpone non-clinically urgent MRI and CT scans and cancel some elective surgeries and outpatient appointments, and revert to pen and paper in some instances. The trust said “only a small number of trust computers now remain switched off as a precautionary measure”.

Helen Ray, executive chief operating officer at the trust, thanked the IT team at the trust in a statement, and said that “in addition, our pathology, pharmacy and radiology teams have worked tirelessly all weekend under difficult circumstances”. 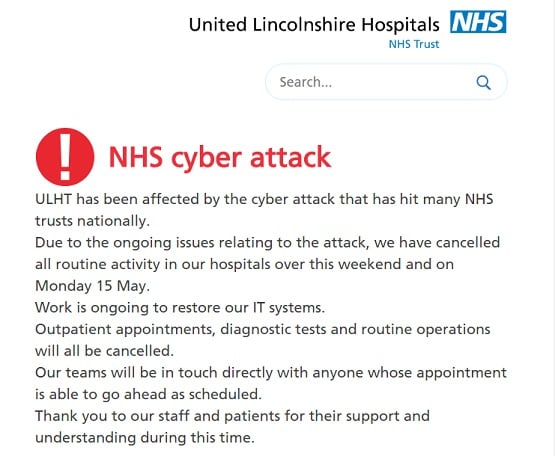 A screenshot from United Lincolnshire Hospitals homepage on Monday afternoon

United Lincolnshire has cancelled all routine activity in hospitals on Monday, with outpatients appointments, diagnostic tests and routine operations all called off. The trust remains in a “major incident”, and breast screening at Lincoln and Pilgrim hospitals, as well as mobile screening in Long Sutton and Horncastle have been cancelled.

A Facebook update on Monday afternoon, said that all patients should attend booked outpatient appointments and operations as planned for Tuesday.

Important message for all staff – please do not log on to any device until you are advised to do so by your line manager pic.twitter.com/uoRS9m8UBG

Northumbria postponed all planned CT and MRI scans on Monday and Tuesday, and said in a statement that work on the cyber-attack will continue into the night and tomorrow morning.

There is disruption for ten patients who were due to have a planned operation requiring an inpatient/overnight stay, and these people have been contacted.

All planned day case procedures on all sites will go ahead tomorrow.

This is the second time the northern trust has been taken down by its IT this year. In February, Northumbria Healthcare had to resort to pen and paper following a failure of its core network routing.

Radiology was affected at Basingstoke and North Hampshire Hospital, but no data loss or impact on other services, according to the trust on Monday.

The x-ray service remained closed at Basingstoke hospital for patients referred by their GP.

Staffordshire and Stoke, a trust that provides community health and social care, cancelled some outpatient and day case appointments at Haywood Hospital on Monday.

Describing it as “extraordinary circumstances”, Kieron Murphy, director of operations and acting chief executive, said that “our IT team has been working throughout the weekend to resolve issues and significant progress has been made. However, some services are still experiencing network problems and work is ongoing to resolve these issues”.

The trust’s website was affected at the University Hospital of North Midlands, due to “national technical issues”.

How to protect yourself from Ransomware

How to protect your device from ransomware. A variety of tips from NHS Digital, the Information Commissioner’s Office and Europol.