5G to launch into healthcare in 2020 – Ericsson

Technology giant Ericsson is labelling 2020 the year that 5G will launch into healthcare.

Announced at Kings College London on Wednesday with the launch of a 5G research report, the company believes that 5G will be a “huge game changer”.

5G is described as the next evolution of mobile wireless standards, after 4G and 3G.

Hanna Maurer Sibley, head of network products in Western and Central Europe for Ericsson, described the future “network society” where “5G can really be a huge game changer”.

The report titled, ‘The critical role of 5G in healthcare transformation’ was based on research from 4,500 smartphone users and 900 industry decision makers in Germany, Japan, South Korea, the UK and the US.

Its three key predictions were healthcare becoming decentralised, centralisation of patient data in hospitals and increasing dependence on wearables and remote treatments.

The research reported that 39% of chronic patients prefer online consultations to face-to-face meetings and 62% agree that wearable devices will put people in charge of their own health.

The findings also revealed that 61% of consumers say remote robotic surgery is risky as it relies on the internet.

At the launch of the report, there was also an opportunity to showcase Kings College London’s research into remote robotic surgery that uses 5G technology.

It was demonstrated how the 5G technology allowed a surgeon wearing a haptic glove to operate in real time with a robotic arm.

However, the audience at Kings was cynical of the timing of the 5G technology, how quickly it will spread in the NHS, security and whether the NHS would even be able to facilitate such technology.

Concerns about how the NHS will handle immature technology with its infrastructure were also raised with the question of artificial intelligence and the NHS in February.

“Security in healthcare, as I have said repeatedly, has to be numero uno.”

The issues of cyber security within the NHS were dramatically highlighted last month through the cyber-attack that downed trusts across the country, either through infection or through the trusts shutting down systems as a prevention.

Dasgupta said the benefits of 5G will be technology being “faster with lower latency and cheaper”.

“I think if those things happen and I am fairly optimistic that they will happen then I think that will be good for patient care.”

He said while the launch will be in 2020, it will take years before the technology is commonplace.

Maria Lema, a research associate at King’s Centre for Telecommunications Research who was involved in creating the technology, also said it had the potential to democratise healthcare by letting everyone have access to the best doctors, regardless of location. 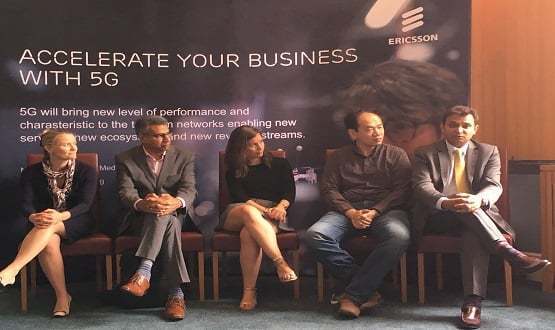