UCLH has launched a new open platform to give staff much better visibility of clinical trials underway at the trust.

UCLH has one of the largest commercial clinical trials portfolios of any NHS trust, recruiting 15,000 patients onto trials in 2018 with over 1,000 studies underway at any one time.  Revenue generated from trials goes back into research at the trust.

“We know we could be recruiting many more patients to clinical trials and the way to do that is to make our trials portfolio more accessible and more transparent” said Dr Nick McNally, managing director of research at UCLH/UCL.

Keytrials has been developed with support from the National Institute for Health Research UCLH Biomedical Research Centre, with Findastudy@UCLH as the first implementation.

“Think of Keytrials as the engine,” explained Dr Wong.

“The reason that’s important is that we developed Keytrials with the understanding that we would like to deploy this technology for other organisations who would be keen to have a similar tool.”

He said the project began from a conversation on a ward with a colleague, that went: “I’ve got a patient with relapsed cancer, what studies are available at UCLH for the patient.  How can they very quickly get to that information?”

The platform was developed over three-years, starting with seed-funding from the Biomedical Research Centre, working with a small developer with expertise in clinical terminology.

The initial plan was to launch across one disease type across the north of central London.  But this proved hard to get traction due to the large number of stakeholders involved, so the focus switched to all diseases across at a single site at UCLH.

“Previously, people were emailing lists to each other, but lists are really hard to manage and out of date almost as soon as you print it off. It was very ad hoc.”

The main data source available was Edge, a clinical trial management system, used at UCLH and in over 95% of NHS trusts that holds the information on what studies are open at any one time.  But Edge is aimed at researchers rather than clinicians or members of the public.  Keytrials bridges that gap between Edge and public facing channels.

Users can now search all trials by condition

Users can now log on and search for available trials for a particular condition, such as ischemic heart disease, and set up alerts for when new studies become open.

An important part of the development is about equitable access to research, stressed Dr Wong.

Keytrials based on open standards and clinical informatics terminology

Dr Wong said of the approach: “It was really important for me when we designed this, that we had clear principles, that it uses standards, open source technology, and that we build a platform that is easily deployable to other NHS organisations.”

The platform had a soft launch three months ago, so early users could test drive and find bugs before going live.

“It’s been very well received.  If you speak to people in hospitals across the country this seems to be a requirement that everybody wants but nobody seems to be delivering,” Dr Wong adds.

McNally added that there is currently a resurgence of interest in research transparency in England.

“This is a tool for improving research transparency and for embedding research within NHS trusts by making it much easier for anyone to look up the studies that might be suitable for our patients,” he says.

“There is good evidence that research active organisations generally achieve better outcomes for their patients, and that’s not just for the patients who consent to take part in research. It appears that there is some intrinsic quality factor within research active trusts, relating to their ability to attract the best staff and procure the best facilities.”

Dr Wong said that using Findastudy researchers at UCLH will be telling all their referrers “this is the best way to find a study at UCLH”. 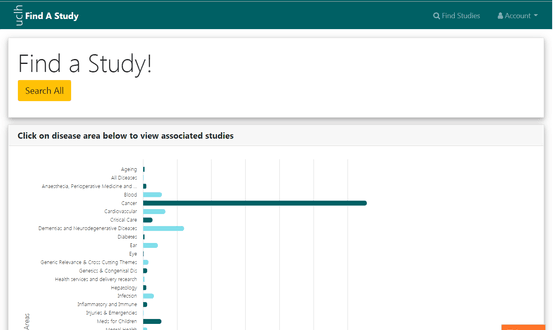 By using clinical terminology trials can be matched to patient conditions

“The most common thing people look for is a condition like diabetes, and because the system uses clinical terminology like SNOMED we then stand a chance of integrating that with data from Epic, Cerner or any other EHR that have also captured that diagnosis using a similar code.  And that’s exactly what we are doing with Epic as a proof of concept,” Dr Wong explained.

“To remove the need for a human to manually annonate studies with SNOMED terms , we are experimenting with using Natural Language Processing (NLP) to read the study details and attach SNOMED codes automatically,” explained Dr Wong.  The NLP technology used has been developed by the Richard Dobson group from UCL and Kings

“On other side in the electronic medical records we want to apply the same tool to read the unstructured clinical notes, because relying on my clinical colleagues to always remember to attach a structured term for diabetes is challenging. It’s challenging for all electronic health record systems,” Dr Wong adds.

Trials can be searched in-context with patient electronic health record

The proof of concept work includes in-context searching within the patient’s electronic health record, so that from within the list of diagnosis you can right click and it pre-searches that code in Findastudy (ICD10 to begin with SNOMED CT to follow) with the patient’s age and gives you a short-list of trials.

“We think we’re the first place in the country to have an integration between an EHR and a platform like Findastudy,” said Dr Wong.

“And the way we are doing the join between the Epic EMR and Findastudy requires almost no development from Epic as we are using HL7 standards, which we just build specifications against,” he added.

Keytrials designed to be very scalable and available to whole NHS

“We built the Keytrials platform to be very scalable and there’s no reason it couldn’t scale to the whole of the NHS,” explained Dr Wong.

The idea would be that it would lots of local implementations like Findatrial tailored to the local organisation, all powered by Keytrials.  The code for Keytrials is being published on Github.

One of the biggest unexpected benefits of the Findatrial and Keytrials has been that it feeds people’s curiosity of what trials are underway across the trust.

“Another important benefit of this project has been that it has enabled us to build closer links between the Trust’s Research Directorate and the informatics teams. This new, closer interaction between teams is helping us to explore more ways of using better informatics tools to enhance research management processes in the Trust.” said McNally.