Augmented reality predicted to edge out VR in healthcare stakes

The falling cost of augmented reality (AR) hardware and the growing possibilities it proposes to healthcare means it will succeed the popularity of virtual reality (VR) in the next 10 years, according to a new report.

While VR headsets have proved popular in some corners of healthcare, such as training surgeons and acting as a form of digital therapeutic, the cost, size and practical limitations of the technology has restricted its adoption.

Conversely, augmented reality has been gaining steady traction. This is because unlike virtual reality, the technology allows users to stay in touch with their surroundings, ‘augmenting’ digital information into the world around them as opposed to taking users out of it.

Roxanne Balfe, digital healthcare analyst at GlobalData, said: “In the healthcare space, VR technology has been used for many years to train surgeons for high-risk invasive procedures, but the high cost, size, and complexity of VR surgical simulators has generally restricted their widespread use.

“One advantage of AR in healthcare is that users remain in touch with their surroundings, as opposed to VR, which detaches the user completely from reality. Another major advantage of AR is the ability to put information into the eyesight of the user in real-time, important in time-sensitive situations.”

There is a budding interest in using VR/AR for neuropsychological conditions, with applications available or in development to treat autism, post-traumatic stress disorder (PTSD), depression, phobias, addiction, pain, stress, and rehabilitation, all of which GlobalData labelled “areas in desperate need of novel solutions.” 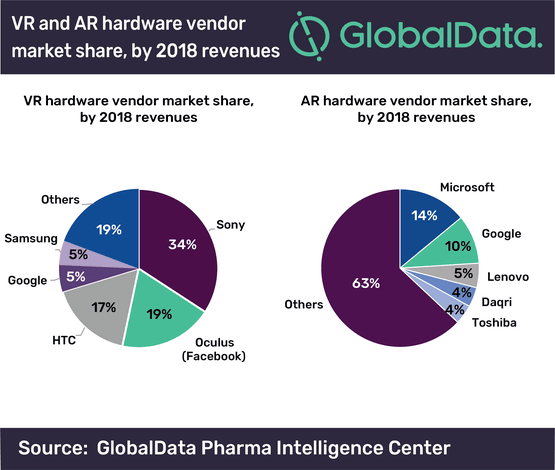 In addition to using Microsoft’s HoloLen’s headset to improve planning around surgical procedures, the trust has developed its own app that uses gamification and AR to ease anxiety among young patients and help them understand what to expect when they come to the hospital.

There has of course been an explosion of AR in the consumer market too, from Snapchat and Pokémon Go to Ikea’s Place app and Mastercard’s Benefits Experience.

“Despite existing technical limitations, the availability of cheaper VR/AR headsets and smart glasses is growing, as well as the ability to use VR/AR applications on smartphones; ultimately leading to the technology becoming more mainstream.