Gloucestershire Hospitals NHS Foundation Trust is on a mission to reach HIMSS level 6 in “as quicker time as possible”.

Starting out on a “very red piece of paper” the trust was rated 0.02 by the American healthcare information advisor in November 2019.

“Starting from nowhere to getting there in four or five years would be a phenomenal achievement, to do it in three would be even better,” he said.

Two years on from that first rating the trust has now implemented an electronic patient record which Hutchinson said was the “single biggest enabler” to push forward its digital maturity plans.

“What the HIMSS solutions are about is using digital solutions to deliver safer and more reliable care,” he told Digital Health News.

“The big missing piece for us when we got that low score was that we didn’t have an electronic patient record.

“The single biggest enabler for us to make big strides in our digital maturity, and to be able to do so quickly, was to implement an electronic patient record without changing the patient administration system.”

The trust went live with Allscripts Sunrise EPR in late 2019 after selecting the supplier in May of the same year. The system was implemented as a ‘clinical wrap’ around the trust’s existing InterSystems patient administration system (PAS).

Nursing documentation and risk assessments were the first areas to go live with the EPR, with e-observations capacity, including automatic calculation of national early warning score NEWS2 added in March 2020.

The emergency department went live with the EPR in summer 2021.

“The reason we’ve been able to do it so quickly is because we implemented it as a clinical wrap around our pre-existing patient administration system,” Hutchinson said.

“Most EPR programmes seem to start with people spending the first two years replacing their PAS. It costs millions of pounds and takes years.

“We have left our PAS in place and wrapped clinical functionality around that, and that’s why we’ve been able to change a very red-looking picture to a largely green and amber one [see image].”

The next step in the trust’s EPR programme will be to implement electronic prescribing systems through the Sunrise Clinical Management product, expected to go live in 2022.

“The challenge then is about adoption across the whole organisation. In an organisation with 1,000 beds and 8,000 staff across two main sites that are 10 miles apart, spread and adoption becomes the biggest challenge,” Hutchinson added. 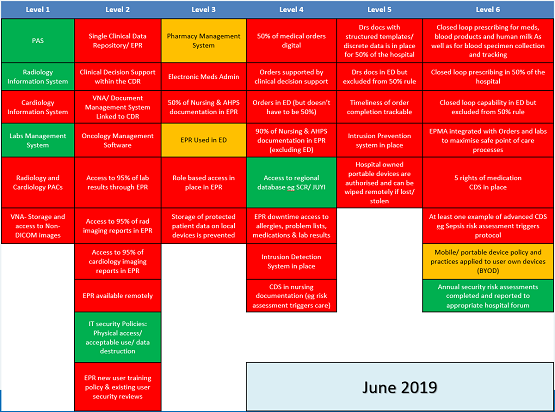 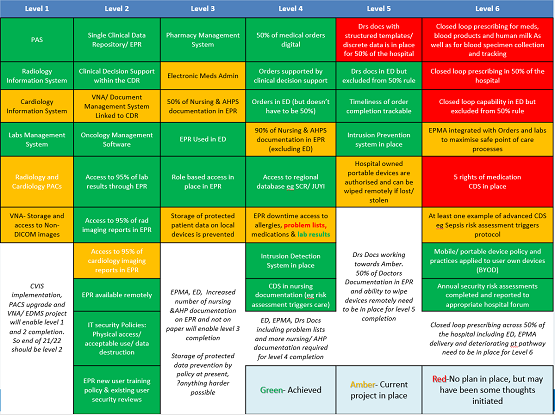 ‘Eat the elephant one chunk at a time’

Hutchinson, who was previously CIO at Salford Royal NHS Foundation Trust for six years, said his experience has taught him to set goals in “manageable steps”.

“What I’ve learned over the years is that it’s really important to try and eat the elephant one chunk at a time,” he told Digital Health News.

“We’ve all seen organisations that have tried to absorb enormous amounts of digital change over one weekend and then often experience really significant operational challenges.

“This is an organisation that hasn’t used, or had access to, many digital tools in the past, and a workforce who historically haven’t been used to working in a digital way.

“So, it was really important to take this EPR implementation and the journey to HIMSS 6 in manageable steps so that we can support our clinical teams as they move from pen and paper to working with computer systems.”

And the key to ensuring widespread adoption and use? Clinical involvement and building confidence throughout the organisation, Hutchinson said.

Every time an area went live with the EPR clinical staff were involved in floor walks to share learnings with colleagues.

“The key is clinical engagement. When we first went live [nursing documentation and risk assessments] 58 nurses from across the organisation got involved in the design of that documentation,” Hutchinson said.

“A thousand people have used the EPR in the emergency department in the last two months and their involvement with testing, with building, with training is really the key.

“It’s quite easy to build a system quickly, throw it out there and it all go wrong. The key for us has been able to build it quickly, put it out there and for it to be used as well as it has, which was all down to clinicians being keen and enthusiastic about working differently.”

The trust was recently named a Digital Aspirant in the second round of funding for the programme announced exclusively at Digital Health Rewired in March, one of seven trusts to receive up to £6m over three years to fund digital transformation programmes.

It plans to use the funding to support the rollout of its ePrescribing system; gong paper-lite across outpatients; and ensuring systems are interoperable to enable shared health and care records.

“It’s a massive vote of confidence for people at the centre to have seen the progress that we’ve made, to acknowledge where we’ve been, but believe that we are a team who can further accelerate our progress,” Hutchinson said.

“It’s a real encouragement for the organisation, for the clinical teams who are working differently as a result of this transformation… and it’s great for the people of Gloucestershire because it helps us accelerate our determination to make care evermore safer and reliable.

“And it’s great because it comes with some cash and that’s really helpful when it comes to digital transformation.”