Put yourself on the map! 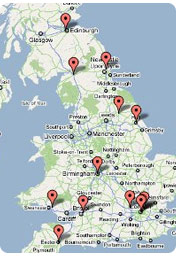 E-Health Insider has created an interactive map to highlight the work of the recent winners of its annual awards.

The map shows the location of the winners of the 2008 and 2009 awards and gives readers access to the case studies that have been published about them.

It can be found in the “awards” section of the site, which also has a “showcase” of features about winning projects.

If you would like your project to be in with a chance of winning an award and appearing on the map next year, entries for the E-Health Insider Awards 2010 in association with BT are open now.

There are nine categories this year, plus an overall winner. The results will be decided by a distinguished panel of judges, led by NHS chief information officer Christine Connelly.

There is also the popular Healthcare ICT Champion of the Year category, which is decided by readers of the EHI website. Nominations are open now and citations explaining who you would like to nominate, their role and why they should win can be sent to Emma Corbett.

Case studies on the 2009 winners are still being published on EHI, so revisit the map through the summer to see the full line-up of recent winning projects.

The deadline for entries for this year’s awards is 4 June. Nominations for the Healthcare ICT Champion of the Year should be submitted by  23 July.

The E-Health Insider Awards 2010 in association with BT seek out and reward outstanding work within the UK healthcare IT sector. Entries are open now on the dedicated awards website.

The deadline for entries is 4 June.

The awards will be presented on Wednesday, 6 October in the Grand Hall at the Grand Connaught Rooms, Covent Garden, London. For more information or to reserve a table, please visit the awards website.

To find out more about the previous winners of the awards, visit our case studies showcase. Last year’s Healthcare ICT Champion of the Year, Andy Inniss, is now an EHI video diarist.