McNeil joined the panel, which is chaired by Dr Joe McDonald, a practising NHS consultant psychiatrist and CCIO at Northumberland, Tyne and Wear NHS Foundation Trust. Its two vice chairs are Anne Cooper and Jonathan Kay.

The advisory panel provides the governance, strategy and direction for the network, which is dedicated to promoting the development of CCIOs across the NHS, greater collaboration and best practice.

The CCIO Network, established four years ago, grew out of Digital Health’s campaign to introduce the CCIO role to the UK.

It aims to support the CCIOs that are now in post and encourage young clinicians to think of a career in health informatics. The network runs national and regional events, most notably the CCIO Summer School, and a private collaboration online community.

McDonald said: “The CCIO Network was extremely pleased at the appointment of the first NHS CCIO and it is great news that Keith has now accepted the invitation to join the CCIO Network Advisory Panel.

“The CCIO Network is the de facto end user leadership network for NHS IT and we look forward to working closely with Keith.”

It has been a busy year for McNeil, who came to England from Australia in 2013 to lead Cambridge University Hospitals NHS Foundation Trust and its eHospital programme, centred on the implementation of Epic.

The deployment of the electronic patient record contributed to pressures on the trust that led McNeil to resign a week before the trust was put into special measures by Monitor in October 2015.

He was announced as the first ever NHS CCIO in July, in line with a subsequent recommendation in Dr Bob Wachter’s review of NHS IT, which called for a bigger investment in clinical IT leadership.

Shortly after his appointment, he spoke at the CCIO Summer School in Leeds. Since then, he has been announced as chair of the National Information Board, which co-ordinates the work of the many central organisations with an interest in IT.

He will also lead the new Digital Delivery Board, which last month’s NHS operational contracting and planning guidance indicated would take responsibility for the delivery of the digital health agenda.

When McNeil took up the national CCIO role, he stressed that: “Introducing and embedding new technology takes time, and is always challenging.

“This is particularly so in hospitals and healthcare. However, the rewards are great – getting it right transforms the way we care for patients, improves patient outcomes and saves time and money for the NHS.” 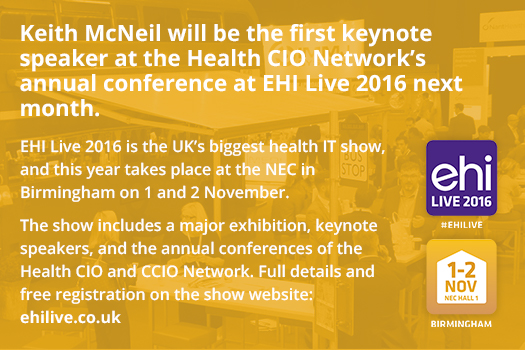