A revolutionary change in Ireland’s healthcare system is on its way – a Euro 850m business case has been approved but the process to fund this continues to be a challenge.

Ireland remains the last country in the EU to still be using a paper-based system to deliver hospital care.

However, the adoption of an electronic health record across the country forms the cornerstone of Ireland’s eHealth strategy.

While the business case for the four key pillars –  an acute EPR; a community EPR; an integration platform; and a national shared record provided via a portal –  has been approved by the HSE Directorate, the HSE CCIO Council and eHealth Ireland Non-Exec Committee, it remains to be signed off by Ireland’s Department of Health.

Ireland’s outgoing chief information officer for the Health Services Executive, Richard Corbridge tells Digital Health News that the DOH sees the case as approved, but there is no process yet in place to fund it.

“It means that we begin the building of the requirements which will sit on top of the Personas work that has been completed”, Corbridge said. “We have approval to bring in support for each of the four pillars of the business case as well, which means the teams are now in place.”

Corbridge says they have approval to begin the process, just not the final bill.

“This is the first time a business case has been presented with the cost of business change in it as well as the technology cost which is part of the difficulty.”

In October this year, the ‘client side’ support contract for the acute pillar, was awarded to comsultants Deloitte.

Corbridge, who leaves the HSE in November to take on a new role in Leeds, said: “The contract is to provide resource to assist in the delivery of Acute EHR, taking the business case to the procurement.”

“The EHR personas are now published to all vendors as is the business case.” 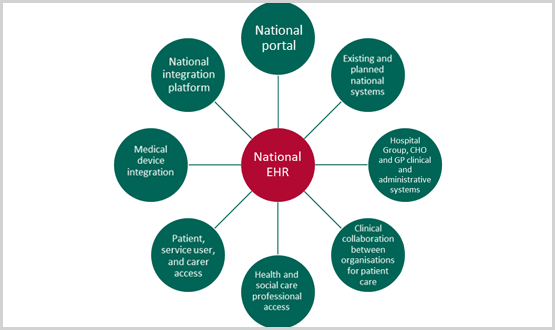 During the latter part of 2014, the HSE engaged with more than 150 eHealth industry vendors to gain insight into the capabilities of EHR vendors across the range of solutions and services required to deliver a national EHR.

A set of assumptions was defined, including an overall eHealth Blueprint focusing on the core components of an EHR, the indicative intent of the HSE and considerations around the implementation programme.

Corbridge emphasised that an EHR “is the only way the healthcare system can become truly efficient and truly safe.”

As part of the Knowledge and Information Strategy of the Office of the CIO, the national EHR was  identified as a core capability.

“Ireland is the last country in the EU to still be delivering care on paper other than its two new digital hospitals. eHealth Ireland is now empowered to start this programme of work and over the coming three years really move this programme forward”, says Corbridge.

The rest have a mix of patient administration systems with some add-ons. Around 70% of Ireland’s hospitals use the iSoft PAS iPM, previously owned by CSC and now owned by DXC.

The estimated cost of the EHR business case over a 10 -year period is around  Euros 850m. Corbridge confirmed procurement must start by March 2018.

At the recent eHealth Ireland event in Dublin, DXC Technology’s Rohan McGrath said: “(EHR) is a vital piece of national infrastructure which we need to finance and implement and we need to get on with it.”

More information can be found here.

Key benefits: (Office of the CIO)