Hancock says the ‘tide of technology should be embraced’

Health secretary Matt Hancock has said the “tide” of technology in the NHS should not be held back but embraced.

In a speech at the Spectator Health Summit event in London on 18 March, Hancock stated he firmly believed in the future robotics, personalised medicines, artificial intelligence and genomic sequencing will become a “routine, everyday part of healthcare”.

But rather than shying away from this, Hancock added that he wants to embrace it saying that some would argue the technology tide needs to be held back.

He said: “Yet, history has shown us time and again, it’s better to shape change than to fight it.

“It’s better to be in favour of the future than live in fear of it.

“And when I am out in hospitals and talking to NHS teams across the country, I also know that people – patients and staff – are enthusiastic to embrace technology.

“They increasingly expect it to be there. Technology is across all other parts of their lives.”

He said: “We do need more doctors, and the technology isn’t perfect.

“But the response, to both of these challenges, is to make the technology better, not to reject it altogether, in a spirit of rational enquiry and scientific progress.”

Hancock also provided another small glimpse in what lies in store for the new NHSX unit saying it will be “a brand new, specialist bridge between the worlds of healthcare and technology”.

He said: “It’s going to work with industry and in-house teams to create a culture of innovation and experimentation within the NHS so proven, safe, tested existing technology spreads faster across the system – and we break up some of the silos that slow down progress.

“We’ll ensure we keep our first-ranked place at the forefront of the global debate around genomics so we can create an ethical framework to ensure this exciting new tech is developed responsibly.” 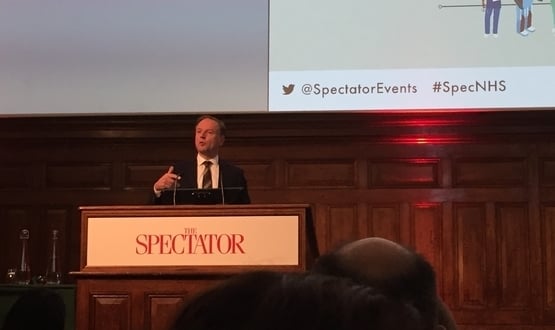 Other speakers at the event included NHS England chief executive, Simon Stevens, who said the health service needs to be “permeable to innovation”.

However when asked about the potential that technology could alienate some areas of society, Stevens said they should be “additional options” rather than substituting face to face options.

Stevens also emphasised that technology should assist clinicians rather than adding more tasks needed to be done during their day, referencing the recent Topol Review which argued technology can help free up doctor’s time.

Call for investment in digital innovation for mental health services