Ten Sheffield patients were left waiting for appointments for more than a year after the hospital’s patient administration system failed to print their appointment letters.

Sheffield Teaching Hospitals NHS Foundation Trust confirmed that in December last year, it uncovered 10 patients that waited more than 52 weeks for an appointment.

The delay was because of “an issue with its Lorenzo PAS [patient administration system] that has now been corrected, whereby the appointment letter was created but not printed from the system”, reported the trust’s February board papers.

The “serious incident” was described as a “significant increase” from November, when no patient care was delayed for this length of time.

Kirsten Major, director of strategy and operations at the trust, said in a statement to Digital Health News, that as the patients did not receive the letter and consequently did not attend the consultation, they had removed from the system.

“As soon as we realised the technical issue had occurred we immediately contacted the patients to offer another appointment as soon as possible.”

“We have rectified the technical problem and put in additional checks to limit the chances of this happening again.” 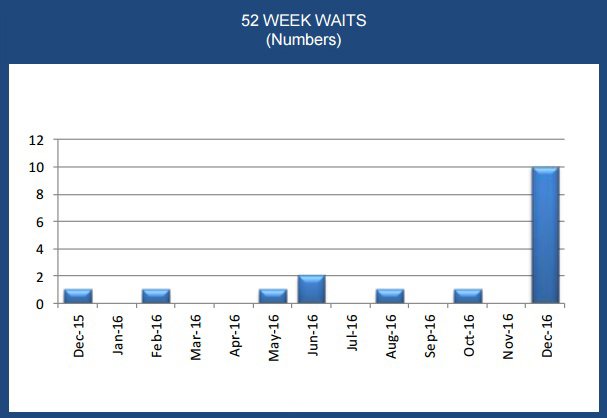 A table of the number of patients waiting for 52 weeks from December 2015 – December 2016. Source: Trust board papers

In 2013/14 NHS England introduced a zero tolerance on any referral to treatment waits of more than 52 weeks.

Major said most of the delayed patients being dealt seen for dental issues, and two were for ophthalmology appointments. None were for emergency or cancer care, she added.

Major said “we have apologised to all of the patients who were affected”.

In May last year, the Princess Alexandra Hospital NHS Trust paid a £1.8 million fine for multiple breaches of the 52-week target after problems deploying its Cambio’s Cosmic EPR.

In January, Sheffield Teaching overhauled its IT strategy to combat cyber-attacks, which it described as the trust’s most significant digital threat.

The strategy also said that the trust wants to deliver a fully integrated electronic patient record, including patient administration, emergency department and prescribing functions integrated with maternity, theatres and orders and results systems.

Sheffield Teaching is one of the UK’s largest and busiest trusts with about 16,000 employees.

CSC did not respond to questions before publication.

Digital Health Intelligence: holds information on the clinical systems installed at trusts across the UK and uses this to calculate a Clinical Digital Maturity Index score. Sheffield Teaching Hospitals NHS Foundation Trust ranks 63 out of 153 acute trusts, with a score of 77. (requires log-in).

One of the largest children’s hospitals in the UK, Great Ormond St, will become the first specialist trust to deploy an Epic electronic patient record.