A re-worked version of the e-discharge summary standard has been published by the Professional Record Standards Body.

Issued 31 May, the revisions aim to improve communication between hospitals and primary and community care. Changes include how information about a patient’s medication is entered.

Using this standard, hospitals can now transfer standardised clinical information using PRSB headings and coded data (SNOMED CT and dm+d), which can then be transferred directly into GP IT systems.

This will help ensure non-acute care settings have a clear picture of the treatment a patient received during a hospital attendance or admission.

In a statement to Digital Health News, Lorraine Foley, chief executive at PRSB said: “GPs and other health and care professionals working in the community depend upon hospitals to provide up-to-date detailed information about patients’ hospital treatment and care in order to support them well upon discharge.”

Standards are critical to ensure health and care information can be shared and re-used safely in an electronic environment.

Beverley Bryant asked the London audience: “What is the point of being a national health service if we don’t capitalise on the national nature of it through standardisation of our clinical terminology?” 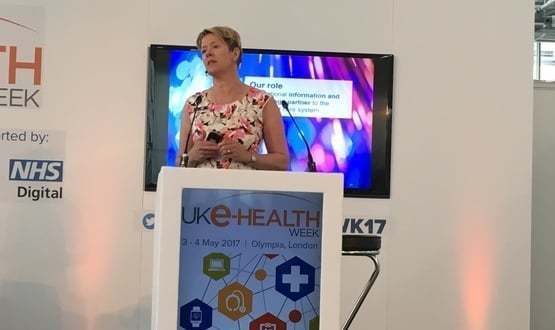 Foley said on the revised standard: “Having detailed feedback about the medications a patient has received in hospital is an essential part of that handover and this revised standard will help avoid costly and potentially damaging errors or delays in people getting the medicines and treatment they need.”

The standards are also fully endorsed by the Royal College of Physicians (RCP).

A spokeswoman from RCP’s Health Informatics Unit said in a statement to Digital Health News that “as an invaluable piece of work that we have been heavily involved in, we wholeheartedly endorse the e-discharge summary”.

“Through clinical leadership from both RCP and RCGP [Royal College of General Practitioners] the summary was created to be both practical and fit for purpose, as well as meeting the needs of hospital doctors and GPs, and ensuring that implementation within hospitals, specialties and across the wider NHS is not only feasible but straightforward, providing patients with high quality care.”

The reworked e-Discharge Summary Standard was produced in two phases. The first phase, which was completed in April 2015, created information models for 11 key headings in the discharge summary.

The second phase involved a focus on medicines and the validation of information models.

Discharge summaries have been a long-standing area for NHS IT effort. Trusts were set a target to get discharge summaries to GPs within 48 hours almost a decade ago, and regulatory bodies have frequently criticised the content of the summaries sent.

Trusts have been legally required to send electronic discharge summaries to GPs and social care organisations since October last year.

From PRSB’s project, NHS Digital will develop technical specifications for e-discharge summaries which can be implemented throughout England.

As part of the standard NHS contract, providers are required to use PRSB headings and from October 2018 will need to send structured and coded discharge summaries to GPs.

The e-discharges to GPs are part of a wider effort to standardise and structure communications across healthcare settings.

In July 2015, a PRSB survey found that “urgent improvements” were needed to discharge summaries and referrals.

Delayed, incomplete and illegibile information was creating difficulties for medicines reconciliation, with discharges and referrals from emergency departments to GPs identified as “by far the highest priorities”.

The PRSB was set up in April 2013 to promote the development of health and care records based on common record keeping standards.

NHS Digital declined to comment on this story, citing purdah.

Broadband will be intrinsic to health in the US – AMIA letter

Access to broadband will determine your health and may already, according to the American Medical Informatics Association.