The team at Norfolk Recovery Partnership (NRP) have trialled a new and one-of-a-kind fingerprint-based drug test technology allowing them to easily detect and analyse traces of drugs in rehab patients.

UK-based company Intelligent Fingerprinting developed the system with its chief scientific officer, David Russell from the University of East Anglia when he came up with the idea six years ago.

NRP trialled the medical device to support its rehab programmes. The organisation provides advice and treatment to adults with drug and alcohol problems. It operates from seven sites across Norfolk and is run in partnership with Norfolk and Suffolk NHS Foundation Trust.

Christopher Strivens, deputy service manager for NRP said with Intelligent Fingerprinting there’s now a drug screening approach that is both non-invasive and easy to use.

They discovered the device to be efficient and easy to use with none of the hygiene or administrative issues typically associated with traditional drug screening methods that use saliva or urine.

“Fingerprint-based screening certainly looks like it will prove a valuable technology for use by drug rehabilitation services”, Strivens said.

It is the world’s first portable fingerprint-based drug screening system which detects drug use by analysing chemicals, known as metabolites, contained in traces of sweat found in a fingerprint sample.

The company behind its development said it is ideal in supporting rehabilitation services across both clinical and community-based sites.

The four drug groups it detects are: amphetamines, cannabis, cocaine and opiates (heroin).

Paul Yates, business development director of Intelligent Fingerprinting, said one of its major benefits is its non-invasive approach. 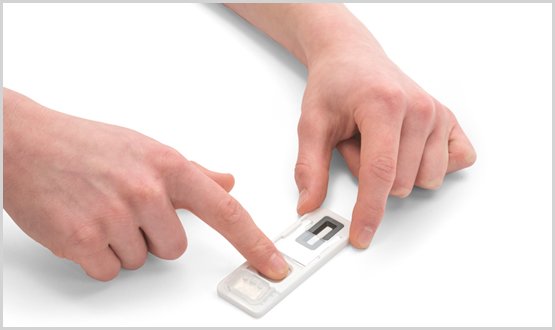 “It is a far more dignified way of undergoing drug screening, compared to what’s out there… it requires a single fingerprint sample that takes just five seconds to collect and provides simultaneous results in under 10 minutes for amphetamines, cannabis, cocaine and opiates”, Yates said.

“On the other side, it provides organisations like Norfolk with a more efficient and convenient way to conduct drug tests… making the process easier and faster”, Yates said.

The technology went through NRP’s own governance and ethics processes with positive feedback by both staff and service users.

Together these have the potential to be used almost anywhere, any time to support a range of applications including drug rehabilitation programmes such as at NRP, as well as tackling drug use in prisons.

Since 2012 Intelligent Fingerprinting has raised £11.23 million in funding from a consortium of private UK and US-based investors, as well as government funding for pilot studies within the NHS and coroners’ services.