The use of artificial intelligence (AI) and voice technology was explored at the recent Giant Health Event in London.

“We are at an amazing point in the use of technology, voice in particular and new ways of delivering technologies to patients,” Philips said.

“Innovation is what drives this market forward.”

Sticking with the idea of the importance of innovation, Cable focused on how new technology companies, which may be exploring the idea AI and voice technology in the health sector, could be funded.

He said Brexit may have an effect, in particular on the European Investment Fund which supports innovation technologies in Europe.

Cable later tweeted to say that loss of the European Investment fund would ‘hurt’ the medical sector (full tweet below) which he said was a ‘big chunk’ of the UK economy. 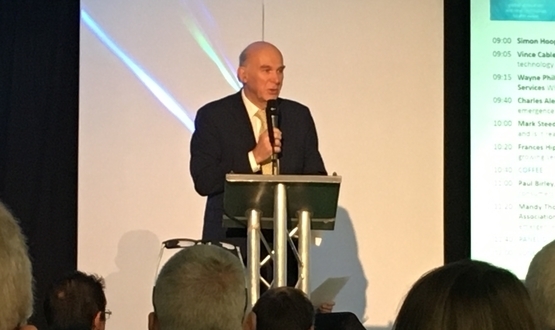 One of the side-effects of Brexit is money from the European Investment Fund is frozen, hurting sectors like medical tech #gianthealthcareevent

Accenture, which supports businesses by using technology to solve problems is exploring the use of voice technology in social care.

It recently finished a pilot programme which uses AI to help those aged over 70 to cope with their care and well-being.

The Accenture Platform, which uses AWS, learns users behaviours and preferences and then suggests activities to support their physical and mental well-being.

The platform, which can be loaded onto Amazon’s Echo Show, features a ‘Family and Carer’ portal that allows family and caregivers to check in and ensure the individual has taken their medication.

The technology can also identify abnormalities and then alert family members.

Other services include the ability to search for local events, reading and learning materials and appointment reminders.

Sixty people, aged over 70 and living independently, took part in the pilot which ran from August to October with 20 of them deciding to purchase the platform.

Laetitia Cailleteau, head of Accenture Liquid Studio London where the platform was developed, said it is an example of how technology can ‘work for people’.

The older generation appears to be having an increasing interest in health technology.

A survey conducted by Ieso Digital Health revealed more people aged over 65 in the UK were accessing online cognitive therapy (IECBT) – technology which allows patients to talk in a virtual therapy room.