Against a backdrop of limited clinical mobile apps from suppliers and constrained funding, NHS organisations are simply developing their own, new research by Digital Health Intelligence has suggested.

Half of those surveyed for “Upwardly mobile: the rise of mobile working in healthcare – exploring the benefits, the barriers and the opportunities” – published today in association with Samsung – said their organisation had built its own mobile apps to meet the needs of staff.

The report was based on a Digital Health Intelligence survey of 116 healthcare IT leaders from across health and social care, and in-depth interviews with nine leading CCIOs and CIOs.

One of them, Darren McKenna, suggested the lack of apps was slowing the use of mobile technology in healthcare. “Until we start seeing good apps coming out, I don’t think we’ll really see the rise of care settings to a massive extent,” said McKenna, CIO at Northumberland, Tyne and Wear NHS Foundation Trust, which is one of the global digital exemplars.

Among the in-house mobile applications mentioned by those surveyed for the report were bed boards, consultant-to-consultant referrals, and therapy outcomes measures.

While the research demonstrates a keenness for further technology-assisted mobile working in healthcare – 96% said they saw “increased benefits” from working remotely – it reveals a lack of dedicated mobile apps to be far from the only barrier.

Poor connectivity also emerged as a key issue. Nine out of 10 of those who responded to the survey said they use their mobile at work, and 93% said they had wi-fi access.

But 30% rated the quality as average, poor or very poor, and almost 40% did not feel their organisation’s wi-fi or communications infrastructure was strong enough to accommodate the increasing use of mobile devices.

Interestingly, the report suggested that – for many – security issues are not necessarily a barrier to further uptake of mobile technology in healthcare.

While the research for the report was carried out only a few weeks after WannaCry infected almost 35% of English NHS trusts, over half of survey respondents said they weren’t worried about mobile security, or weren’t sure whether it was a worry. 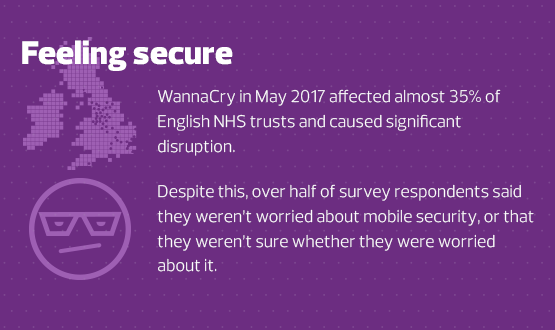 In Digital Health Intelligence’s survey, many respondents said they were not worried by mobile security

Digital Health’s cybersecurity forecast for 2018 saw experts argue that further attacks were inevitable this year, with some suggesting mobile was an area in which it was particularly important to build resilience.

For more on the research, read our feature article on the key themes it uncovered, and download the full research report – “Upwardly mobile: the rise of mobile working in healthcare – exploring the benefits, the barriers and the opportunities”.