Double robot surgery carried out at The Royal Marsden Hospital

A robot has reportedly performed a double surgery on a cancer patient in London.

Surgeons at the Royal Marsden Hospital sat on opposite sides of the da Vinci Xi robotic console to perform a hysterectomy on 63-year-old Christine Lockton, as well as removing part of her colon.

The technology allowed them to see the areas they were operating on in closer detail by using magnified 3D images, Sky News reported.

Surgeon Shahnawaz Rasheed, who led the operation with Marielle Nobbenhuis, said: “”The precision of surgery, we think, is much higher.

“Because of that, the impact on the patient should be less.

“So we can do the same operation in terms of the removal of the cancer, but have less of a trauma to the patient.”

Ms Lockton, who was diagnosed with colorectal cancer in September 2017, was able to return home just days after the procedure.

Surgeons at The Royal Marsden Hospital is not the only ones using robots during procedures.

In January 2018, Digital Health News reported that robotic surgeons have been put into use at Barts Health NHS trust. 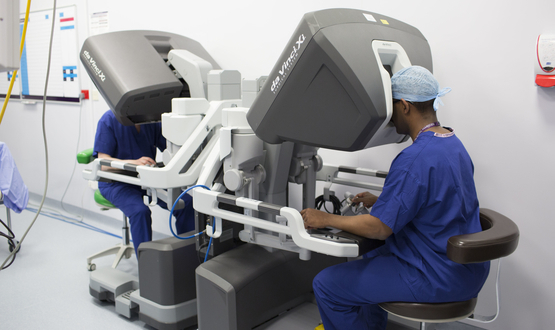 Pharmaceutical company Pfizer has opened applications for its second Pfizer Healthcare Hub: London programme, which seeks to invest in start-up companies working in the health...