The “Healthy Homes” project aims to help dementia patients live in the comfort of their own home for as long as possible.

The centre will use a range of approaches, including artificial intelligence, robotics and sleep monitoring, to create safer homes.

Based at Imperial College London, in collaboration with the University of Surrey, the centre will be funded by the UK DRI’s three founding partners: the Medical Research Council, Alzheimer’s Society and Alzheimer’s Research UK. 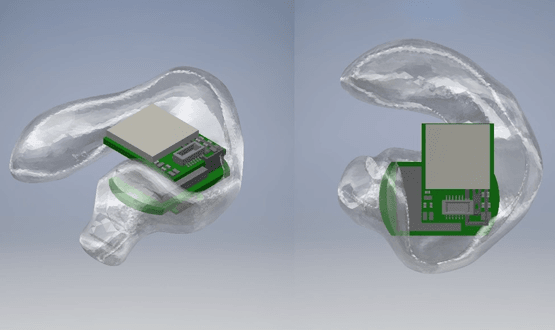 Professor David Sharp, neurologist at Imperial College London and head of the new centre, said: “The vision for this centre is to use patient-centred technology to help people affected by dementia to live better and for longer in their own homes.

“Latest figures suggest one in four hospital beds are occupied by people with dementia – and 20 per cent of these admissions are due to preventable causes such as falls, dehydration and infections.

“The new technologies we develop will improve our ability to support people in their homes. They will allow us to intervene at an early stage, to prevent the crises that so often lead to hospital stays, or a move to a care home.

“What’s more we’ll be able to improve our understanding of dementia onset and progression.”

The centre, based at the Sir Michael Uren Biomedical Engineering Research Hub, will bring together scientists, engineers and doctors to build on existing technologies. 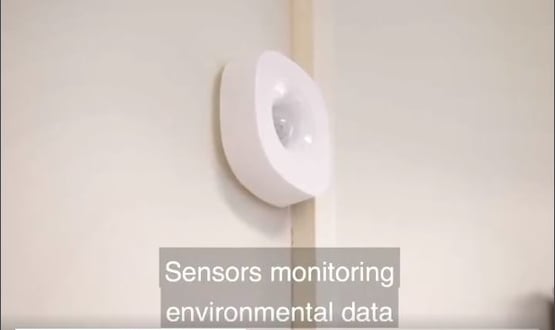 Tiny sensors placed around the home will monitor the environment – detecting if a patient has fallen, or hasn’t moved for a while

Trevor Truman, member of the centre’s steering committee and carer for his wife who was diagnosed with dementia in 2016, tested early prototypes of the technology that will be developed at the centre.

“Having experienced over twenty individual sensors or data-gathering devices in my home, I realise technology can play an important part in achieving this aim,” he said.

“Some sensors automatically monitor information such as sleep patterns, room temperature or unusual movements. Others, such as those that monitor blood pressure, weight, body temperature and hydration, require input from us.

“This suite of technology allows the team to monitor my wife’s health and well-being remotely, and call the carer in any situation that creates concern.

“An example of this was when I received a call saying my wife may need to see her GP, based on her blood pressure readings from the technology.

“When we visited the GP, we were able to take my wife’s data with us – using the app on my tablet– giving our GP an instant overview of her health and recent history relevant to the visit. New medication was prescribed that day.” 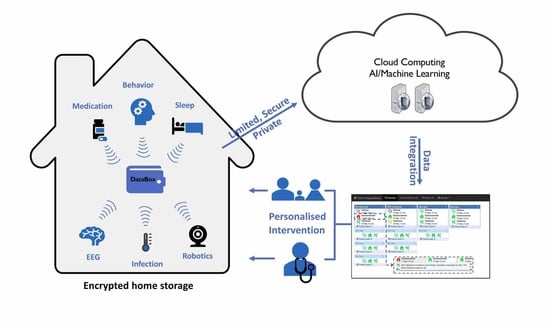 Several other projects in the UK are already looking at how to help people with dementia live at home for longer, including Nottingham Trent University and the University of Bedfordshire who are working with Washington State University to develop a care robot linked to smart homes.

The University of Surrey has also developed technology that can identify and help reduce the occurrence of urinary tract infections (UTIs), the most common cause of hospital visits among older people, using artificial intelligence.

The technology developed at the centre will include:

All of the technology will be assessed and evaluated by people living with dementia, and their carers, to ensure it is both practical and needed.

NHS Digital and NHS England have worked with IT suppliers to create the National Events Management Service to allow access to child health information.