The highly anticipated report, Internet Trends 2017, reveals that people are willing to share their health data with leading tech brands such as Google, proving their position in the digital health market.

The information is cited in investor and tech analyst Mary Meeker’s report, Internet Trends, which is highly regarded in the tech community for its insights into trends and predictions.

The other end of the graph showed consumers didn’t trust Amazon.com Inc. and IBM Corp. as much, with the companies only being trusted by 39% and 37% of people.

However, locally the statistics may come as a surprise considering the furore surrounding Google’s artificial intelligence branch DeepMind’s handling of patient data – together with Royal Free London NHS.

Despite the headlines, more trusts are signing up to work with the London based company, with Taunton and Somerset NHS Foundation Trust announcing its agreement in June.

Meeker, who is a former Wall Street securities analyst, devoted an entire section to healthcare, titled ‘Digital Inflection Point’ highlighting the importance of combining health and technology and its role in offering future solutions as the digital (health) age transforms – particularly in the UK.

The report pointed to the transformation of health through big data and cloud computing, reporting that healthcare data is growing at 48% (annually) worldwide. 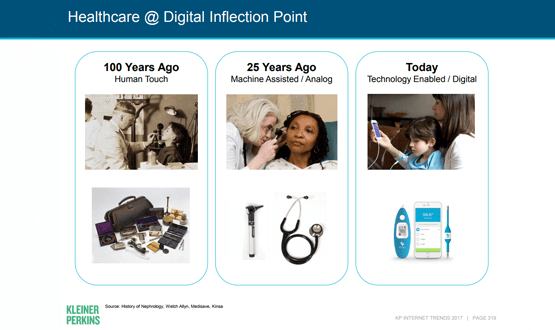 Another big reveal was the shift in digital patient care; putting more patients at the centre of their own care. The report revealed consumers tech-hungry appetite for wearables – with the most popular in 2016 being accelerometers followed by heart rate monitors, gyroscopes and altimeters. This is based on analysis of 140 different wrist wearable devices.

When it comes to digital health adoption, 40% of 18-34 year olds own a wearable, followed by Gen X at 26% and Baby Boomers at 10%. However, when it comes to going online to find a physician Gen X is at 38%, right behind Millenials who top the chart at 48%. Overall, 88% of consumers are using one digital health tool.

The surge in wearables is equally matched by the rise in health-related apps, with downloads hitting more than 1.2 billion in 2016. Globally, the most downloaded health apps in 2015 were fitness-related at 36%,  followed by disease and treatment and lifestyle and stress at 17%.

The electronic health record (EHR) and rise of centralised medical information are at the centre of this growing digital health trend with Meeker’s report showing that hospitals providing access to digital data is also on the rise—having increased sevenfold since 2013.

In just over 17 years, the healthcare industry has gone from x-ray machines to sphygmomanometers to ECGs – indicating the shift in digital capabilities.

Meeker’s overall presentation of health data suggests that data itself has the power to inform and educate medical and consumer communities and according to the lengthy report, medical research and knowledge is doubling every 3.5 years.