The high-profile NHS Digital Academy is set to kick off in April next year with its new chief executive Rachel Dunscombe announcing that it will no longer be exclusively for digital leaders from GDEs and their Fast Followers.

Speaking at an event in London Thursday, Dunscombe who’s day job is CIO at Salford Royal NHS Foundation Trust, said she was not happy the program focused just on GDEs.

“This is about a program that is inclusive”, Dunscombe said.

“One of the things I did when I came in as CEO was made a U-turn on it just being for GDEs.”

In September NHS England awarded a £4m three-year contract, via Capita, to a consortium led by Imperial, Edinburgh and Harvard to deliver the Academy through a mix of online and in-person teaching.

Initially, the NHS Digital Academy was six cohorts of 50, but Dunscombe who became the head of the academy in September, told the audience she had changed it to three cohorts of 100.

She said otherwise it would result in the GDEs meeting and not transferring that knowledge and “I think it’s quite dangerous we create a tower of digitsation and the others.”

“So, I decided 50/50 for the first cohert and I also got commitment to get two social workers on board.”

“Social care are the main un-lockers of a lot of the new pathways that we will deliver …. they play a huge part”, Dunscombe said. 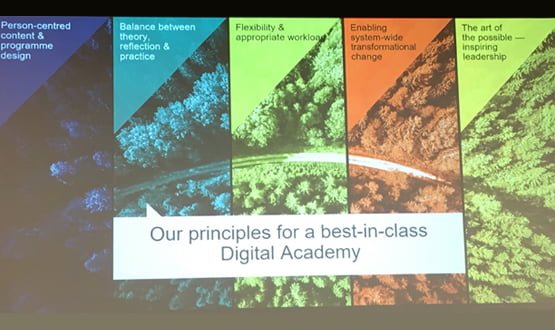 The NHS England commissioned academy is designed to provide specialist IT training and development support to 300 senior clinicians and health managers over three years.

Recruitment has been taking place behind the scenes but the launch of the official application process is running behind schedule.  The programme was originally due to begin training the first cohort in September.

“It is giving CIOs, CCIOs and other professionals a set of skills and a network that will allow them to navigate the future”, Dunscombe said.

There will be six modules that would need to be completed with a CIO and CCIO appointed to review each module.

Dunscombe said this is to ensure CIOs and CCIOs in the UK are happy with the content.

About three-to-five hours of work a week would be spent on completing the program.

“It is wonderful move and a unique set of individuals across the system have helped make this happen,” Dunscombe added.

The curricula will include a big focus on people and leadership. “Something I insisted was the academy is to be about people before technology, because many of the challenges we face are about our citizens, patients, wards, our clinicians, our health economy; these are people problems and problems we need to solve with people”, Dunscombe said. 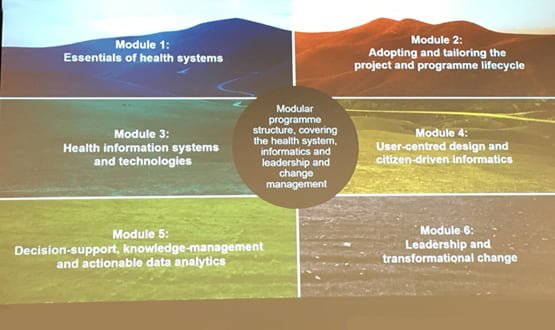 “There is a focus absolutely on technology, but really the technology here is the underpinning enabler.”

Dunscombe said there will be a big focus on social media and the fundamental role it plays in delivering messages to the community.

“A lot of the program is how we engage with people using media and technology.”

As part of the assessment criteria, individuals will be marked on areas including blog posts, video blogs, curation of content, peer debate, and their ability to role play as part of leadership – Dunscombe said it will be demonstrative with the physical world.

Speaking at the NHS Innovation Expo in Manchester where the academy was officially launched, Lord Ara Darzi, former health minister and the chair of the new academy, said:  “I think one of most exciting pieces of work NHSE has commissioned.”

“Besides delivering the curriculum we hope that through a partnership of NHS England and NHS Improvement we will be able to improve the perceived value of the community of CCIOs and CIOs.”

Applications will open in late November and close by the end of December with hopes to start the program in April.