Enthusiasm around the adoption of cloud in healthcare was sky-high at Digital Health’s Cloud Summit last week, which featured trail-blazing speakers from the NHS and cloud supplier community.

During the London event on 24 January, delegates were given insight into how healthcare organisations could leverage the opportunities offered by the cloud to deliver new services free from boxes and wires and turn the NHS into a truly 21st Century service.

Economies of scale was a dominant theme at the event, with speakers from the NHS discussing how cloud can enable a rapid delivery of new infrastructure while ensuring trusts only pay for what they use.

Speakers also used the summit as an opportunity to put fears surrounding the cloud to rest, and share their experiences of making the move to cloud computing.

Joanna Smith, CIO of Royal Brompton and Harefield NHS Foundation Trust, said: “The real benefit of cloud is the consumption model – you only pay for what you’re running and don’t need to worry about running out of capacity.

“All those fears about the cloud, looked at pragmatically…we delude ourselves that the associated risks and potential dangers outweigh the benefits.”

Cloud technology has been central to transformation efforts at Royal Brompton and Harefield, which is current in the midst of an extensive digital makeover underpinned by the motto “off premise, cloud first”.

This includes the implementation of a completely virtualised computer and storage solution and the ongoing migration of the trust’s electronic document management system to the cloud.

Smith wasn’t alone in singing the praises of such an approach. Christine Walters, who has spearheaded myriad technical implementations at St Helens and Knowsley NHS Foundation Trust, was adamant about cloud’s potential to transform the medical workplace.

“I see cloud as a huge technology as an opportunity to provide a much better service to customers,” she said.

“I think there are genuine benefits for all informatics partners. Cloud is going to make collaboration even easier: with housing, fire, police – we want to work with all these services that look after patients. [Cloud] will transform working practices. We won’t just be sharing what’s in our corporate network, but information across multiple networks simultaneously.”

The potential for interoperability across systems and trusts was another oft-referenced topic. Iain Patterson, chief digital officer of UKCloud, discussed how the technology would facilitate connectivity between legacy, EPR and cloud apps and push forward the agenda for open-source software.

“We’re just at the very beginning about what we can do with our data,” said Docherty.

“Cloud providers and platforms have their economies of scale now. It’s so much cheaper, so why would you not do it?”

Yet there was an undercurrent of frustration from some attendees, who pointed out that the slow up-take of cloud technology in the healthcare industry had left it lagging behind those which had embraced it with gusto. 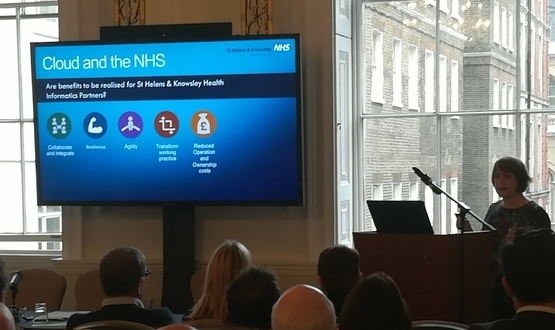 ‘Long in the tooth’

The timely publication of NHS Digital’s cloud guidance on 19 January gave Shaun Fletcher, the organisation’s chief technical architect, the opportunity to explain the five-year gap between the introduction of the UK government’s ‘Cloud First’ policy in 2013 and the official go-ahead from NHS Digital.

“When the GDS (Government Digital Service) issued policy to government and central organisations stating that we should give consideration to cloud-first as a hosting platform, that was really just a permission statement to say you can use the cloud. There were no real guidelines about whether or not you could deploy applications and services that use and store patient data in the cloud,” said Fletcher.

“In fact, the security controls and considerations weren’t really part of the policy. That’s something that was left to the user…We needed to take steps to think about what it meant to put health data into public cloud.”

Fletcher pointed out that the NHS had not been resting on its laurels in the interim, highlighting work on NHS Choices in particular.

“It seems a bit belated that we are now talking about going cloud-first, however cloud is incredibly important, and we’ve not spent the past five years doing nothing – we’ve actually done quite a lot of work. We’ve already deployed some mass services; we’ve just been struggling with the health data issue,” he said.

He too referred to uncertainties surrounding the technology as one of its biggest inhibitors.

“Despite cloud being long in the tooth, it has suffered a whole host of confusions and fears, of technical and non-technical,” Henry added.

Despite the consensus that NHS organisations have everything to gain from cloud adoption, NHS Digital’s Shaun Fletcher stressed that the technology was not a silver bullet and recommended a measured approach to adoption.

“We’re not promising the earth, we’re trying to do this in a controlled fashion. We still need to make sure we’ve got sensible control and governance in place.”

He added: “You need to go into cloud as part of sensible, risk-managed approach. You’ll still be responsible for your own data and the measures you’re taking to protect it – this could become harder as you move to the cloud.”