Staff at Royal Free London NHS Foundation Trust are heralding a new dawn without paper after the trust rolled out a new EPR system.

It was implemented in just 11 months as part of a “big bang” go live and also coincided with the reopening of Chase Farm Hospital.

It means clinicians are now able to view and input medical information at multiple locations across the sites via computers, laptops and mobiles.

Royal Free London NHS Foundation Trust acquired Barnet and Chase Farm Hospitals NHS Trust in 2014 and though both trusts ran Cerner Millennium systems before hand, the latest go live has meant they could both join up onto one Cerner system.

Digital Health News was invited to the new Chase Farm hospital to speak with the team behind the project about how the “big bang” go live went.

Glenn Winteringham, group chief digital officer at the trust, said having all systems going live at once was a “big risk” but it had “big rewards”.

The updated EPR system and the rebuilding of Chase Farm as a digital hospital is the main crux of the Royal Free’s Global Digital Exemplar (GDE) programme, which allowed the trust to have access to extra funding for digital projects.

Winteringham said the extra funding allowed the trust to have a clinical IT team of 13, including CIOs, CCIOs, a CNIO and a CMIO.

Having such a large team, which involved technicians and clinical staff, led to maximum engagement with staff and was crucial to the success of the project, according to Winteringham. 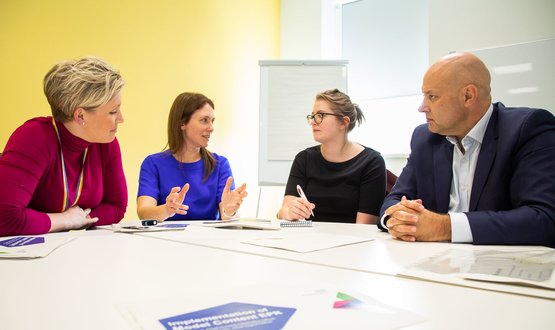 The trust’s CNIO, Katie Trott, told Digital Health News that another key factor to the success of the implementation was clinical staff having “ownership” of the EPR.

She explained how the EPR can easily be updated and reconfigured.

Clinicians are even given the option to pick their own colour preferences to suit their own tastes, meaning they can personalise what they see on the screen.

The trust regularly holds meetings with staff where they can talk about their experiences with the EPR and what additions they would like to be made.

Trott said: “We went from having two updates every nine years to now being two or three a year.”

Another part of the trust’s GDE programme is Streams – a smartphone app designed by DeepMind Health which helps detect early signs of kidney failure.

In December 2017 Digital Health News spoke to NHS consultant nurse, Sarah Stanley, who leads the patients at risk and resuscitation team at the Royal Free Hospital.

Stanley said the app saved her team a “huge amount of time” and has made a “phenomenal” difference to day-to-day actives.