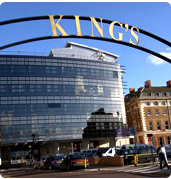 King’s College Hospital NHS Foundation Trust had its annual IT open day last week. When I was told it was in the boardroom, I didn’t expect a big event; just a few staff filtering in and out between shifts.

In the event, I had to struggle to get into the room, which was filled with more than 150 people. “This is our big opportunity to show people what we’re doing, so we invite staff but we also invite people from other hospitals, healthcare organisations and a number of suppliers,” says Colin Sweeney, the trust’s director of ICT.

The event, which has been running for five years, aims to demonstrate to staff at all levels the variety of hospital applications and the technology that is either currently available or will be available in the very near future.

The boardroom had 12 different stands, each with a crowd of people watching demos and asking questions. “We’re basically demonstrating a lot of things that we have here in the trust,” says Sweeney.

“So there’s our patient administration system, iPM, our electronic patient record, which is based on iSoft’s Clinical Manager, and e-prescribing, which we have just started rolling out at pace.”

The trust has recently expanded its decade-old EPR system to become one of the first to use an electronic prescribing module within iCM, which is being rolled out trust wide over 2010.

It has also developed clinical notes and letter making in-house, and has integrated its GE PACS system with context matching to provide clinically rich functionality.

The trust is also investing money in technology in order to create efficiencies. “The financial constraints are going to get worse and hopefully some of these systems will help with that,” Sweeney says.

A McKesson whiteboard is one of the trust’s newest ventures. It was implemented in December 2009 and is now live in almost 50 wards.

The trust is only the second in the UK to implement the system, which is designed to give staff real-time information about bed status and patient care, by taking feeds from different IT systems and displaying it against the hospital’s floor plan.

One of the points of the day, however, is to listen to staff concerns. Dr Jack Barker, clinical director of IM&T, admits that while the whiteboard system has not been in place for long, he is concerned about uptake.

According to one of the trust’s sisters, only one person is using the whiteboard on the ward that she works on. In fact, she tells E-Health Insider that if the old, manual whiteboard was taken away tomorrow, her ward would be “completely lost”.

“The patient status board needs to be built into the EPR, not just put on the wall,” Dr Barker says. “It all needs to be integrated.”

Meanwhile, King’s is about to go-live with largest deployment of self service kiosks supplied by NCR in Europe. The 50 kiosks are intended to increase the speed at which patients are checked-in and enhance data quality by allowing them to update their personal information.

And it is deploying an e-rostering system from Allocate Software that will go-live within the next two months to provide an overview of staff rotas and cut down paperwork.

By the end of the day, about 500 people have passed through the boardroom doors; a testament to the impact that IT now has on the trust.

“We know we are one of the very few trusts to run these events, but we have some people on our team that are very keen to push it through each year, and each year it is an incredible success,” says Sweeney.

However, the event shows that the trust already has a clinically rich EPR and much supporting technology; which rather begs the question of what the National Programme for IT in the NHS can add.

King’s is one of the trusts in London and the South of England that installed iSoft systems ahead of the national programme, and which opted to keep its systems when BT was appointed to implement Cerner Millennium in the capital.

These trusts are often known as the iSoft7. King’s at least appears to have no regrets about being outside NPfIT, which has suffered significant delays in getting its ‘strategic’ EPRs into trusts, and which is still deciding whether two late-November go-lives were a success.

Dr Barker says: “We want to control our own destiny and our own configuration, so we can’t wait for the go-ahead from some district hospital.”

However, iSoft is also part of the national programme; CSC is due to deliver its strategic EPR, Lorenzo, to the North, Midlands and East of England. “It would be a really big deal to go to Lorenzo because it would cause a lot of pain,” Dr Barker says.

“We’d take a migration path very seriously, if one solution had an easier migration path then the other that would be a big advantage. We’ve also got 10 years’ worth of high quality data which we refuse to lose.”

Over the next two years, though, King’s aims to become virtually paperless. Its vision encompasses a “nose to tail” electronic patient record from clerking to discharge summary and greater support for its specialities.

“IT wise, we are doing ok, but we’ve still got a lot to do,” Dr Barker says. “The clinical services are doing well, but we’ve got a lot to do to support the specialities – something which NPfIT really lacks in. What we’ve learned is that sometimes the best way to get things done is simply to do it yourself.”