In January this year, Blackpool Teaching Hospitals NHS Foundation Trust announced that it would be the third to deploy the openMaxims electronic patient record.

The trust is a long-term user of IMS Maxims’ software – the EPR will replace its Hearts patient administration system, installed in 1992.

But it has also developed its own open source portal, has an “open source first” policy when looking for new systems, and is a founder member of the openMaxims community interest company, created to act as a “custodian” for the NHS’ most prominent open source product.

One way and another, Blackpool’s chief information officer, Steven Bloor, knows a lot about open source, its potential benefits, and its risks; and he’ll be discussing some of the latter at EHI Live 2016 in November.

The risks of building an open source system

The in-house development risk that tends to jump out at IT managers is that key staff will leave and new expertise will prove hard to recruit. But Bloor identifies getting the benefit out of a major development, like a portal, as a bigger issue.

“This is one of the risks that I will be talking about,” he says. “We have developed a portal, it has been in place for a couple of years, it has thousands of users, there is wrap-around with other systems, and we have got the presence and so on in place.

“So one risk is you could do all that, and then lose it [if a subsequent decision is taken to go down the single supplier route]. At the same time, we have been offering this to other trusts.

“We’re giving it away – although we would need paying to help implement it – but most people don’t seem to want to do it. It’s almost like ‘if the NHS has done it, it can’t be any good’.” In other words, another risk is doing a lot of work “and nobody takes it up.”

And the risks of deploying one

When it comes to deploying open source software, Bloor says the big risk is that because the code is free trusts under-estimate the costs of implementation.

“You still have to do your project management, and your data migration, and your staff training” he points out. “So if you are not careful, you can end up with a deployment for which the cost is as high as a proprietary deployment – or higher.”

Also, on a very practical level, he says trusts and companies are still working through the mechanics. So, while he praises the executives of IMS Maxims (“there is complete buy-in to the vision, it is inspiring, really”) he says staff on the ground can sometimes forget they’re not just doing things the old way.

“You get people saying ‘you bought an EPR’,” he says. “And we say ‘no, we haven’t. What we’ve bought is the services to implement it, and if you can’t implement it as we want then we’ll go to someone else.”

Although, he admits, the converse is also true. “Sometimes, if we hit a problem, people on the trust side say ‘well, we just won’t pay for it’ – but then, we haven’t paid.”

From plan to timescale

When Blackpool announced that it was going to deploy openMaxims, it said it would be using it to replace its PAS and its theatre system, Ormis, for which the contract expired along with CSC’s other National Programme for IT contracts in July this year.

It said it wanted to upgrade its emergency department system, and to roll out bed management and order communications. For e-prescribing, it is using a proprietary system, CSC’s MedChart.

Since January, Bloor says the trust has done “a huge amount of ground work” and is now planning a first phase go-live with A&E and order comms “in the early part of the next calendar year.”

The trust negotiated an extension to its Ormis contract with CSC, and is planning to replace it and to go live with the PAS “in the 12 months after that.”

Meantime, the MedChart deployment is “progressing”, with a lot of effort going into making sure that staff have the right devices – and into finding the money to pay for them. MedChart is likely to reach the first wards around the end of the calendar year, and then to be rolled out alongside the other IT developments.

Three big projects – rolling out e-prescribing, implementing openMaxims, and developing the portal – might look like plenty to be going on with, but Blackpool has also been working on information sharing with its GPs and other local healthcare services.

Information sharing agreements are in place to give clinicians access to information held by local GPs, mental health and community services, all of which use Emis Web, via the portal.

The trust is also part of the Fylde Coast Local Health Economy multi-speciality community provider vanguard; one of 14 MSCP projects announced in March 2015 to test ideas for moving specialist care out of hospitals and into the community.

The vanguard, which also pulls in two clinical commissioning groups, two councils, and the local mental health and community trust, is aiming to create “extensive care teams” for 1,000 frail and elderly care people, with “access to one care record to support the patient in their treatment”.

Bloor says this needs to mean much more than just giving people ‘access’ to data. “As consumers, we tend to use [IT] products without really being aware of that,” he notes. “If we use eBay, or Amazon, then we are using a lot of different systems, but we don’t really perceive it that way.

“We are talking to IMS Maxims, and to Emis, about the portal and how to get to the point where the user can go in and do what they need to do, without necessarily being aware of what system they are using to do it.

“We need to deliver that kind of consumer experience, because our users are more mature than our systems, rather than vice-versa, which used to be the case. They are saying ‘I do this for banking and shopping, why can’t I do it here?’”

While all this work has been going on, the focus of national IT policy has been shifting.  When Tim Kelsey and his team were at NHS England, the commissioning board drew up an IT framework, ‘Personalised Health and Care 2020’, to be taken forward via Local Digital Roadmaps.

With the arrival of Matthew Swindells and his team in Leeds, and the NHS financial crisis worsening, the LDRs have all but vanished; in the NHS operational planning and contracting guidance, all the focus was on Sustainability and Transformation Plans.

Meanwhile, the publication of the Wachter Review, and the launch of the ‘exemplars’ programme, seems to have put the focus back on single supplier ERPs – even if Taunton and Somerset NHS Foundation Trust, the first to deploy openMaxims, and another partner in the CIC, did make it onto the ‘global’ list.

Bloor says anything that gets money into healthcare IT has to be “helpful” “because we have to square the circle of ‘we need to do this to save money, but there is no money to do it’.”

But he says the decision to pick 12 global digital centres of excellence was “quite divisive” and he’d have preferred an approach that told trusts what they were meant to achieve, and how to get funding to do it.

When it comes to open source, though, he says it’s really for trusts and suppliers to think carefully about where it fits. “Open source is not the answer, it is an answer,” he argues.

“We have an open source first policy, so for e-prescribing we looked at PICS [the system developed in Birmingham] and we looked at what IMS Maxims might develop, but we felt they did not meet our requirements.

“This is one of the things we have learned. You need to compare open source products with what else is out there, and ask: is it 90% there, and if so can we get it to 100%, perhaps by doing some development ourselves, or is it 10% there, and the gap’s too big?” 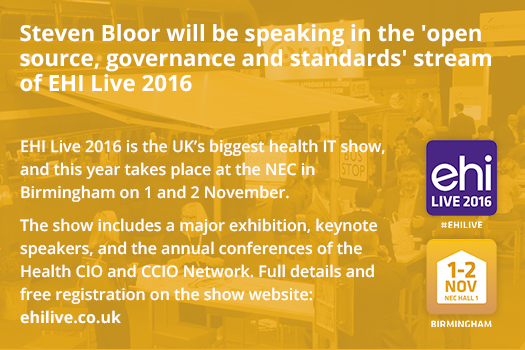