I mean it. I am sitting here wondering what an earth to write about. For someone like me, so eager to share an opinion, to get off the fence or have a rant, it’s a bit of a shock to the system.

What about the exemplars? Or the Wachter Review?

I was going to write about my recent experience on the international panel to pick the recently announced ‘global digital centres of excellence.’ It certainly would make an interesting read, but I cannot compete with Joe McDonald when it comes to reflective prose, solid assessment or fundamental knowledge on the jealousy between primates.

His piece on the whole process is brilliant. Joe is chair of the CCIO Network, founder and leader of the Great North Care Record Programme, informal delegate for the Turkish Tourist Board and now CoGDE International Panel member. He is a class act.

Then I thought: “Why don’t I write about Bob Wachter and his review”. After all, it is one of the seminal moments in the history of digital health and care.

I mean, a review of our world commissioned by the Secretary of State for Health and delivered by a visionary and insightful doctor from San Francisco. But what have I got to add to Bob’s words and his recommendations?

His report speaks for itself and is one the best reads ever. I have met Bob twice and both times been struck by his calm assessment, his efficient use of language, his grasp of healthcare in England and his optimism for our future. He is a class act.

So, I could write about the panel I assembled at the Health and Social Care Expo in Manchester to ‘respond’ to the Wachter Review. A group of folks including health CIOs, CCIOs and local government experts.

We all got to discuss the development of the CCIO/CIO professions and how we have a duty to utilise Bob Wachter’s work to leverage investment in our respective professions.

My panel included Rachel Dunscombe, chief information officer at Salford Royal NHS Foundation Trust. Rachel and I launched the CIO pledge at the summer school this year as a way of asking CIOs to commit to their own development and that of their teams.

Rachel is also instrumental in work underway to bring formal qualifications for health CIOs to fruition. Things she does on top of maintaining Salford’s enviable record as one of the leading digital lights. Just last week, it was crowned ‘trust of the year’ at the EHI Awards 2016. She is a class act.

What about Europe? Which includes Ireland?

I have been eager to write about Europe too. I was lucky enough to spend a few days in Finland earlier this year, meeting colleagues from there, Denmark and The Netherlands and learning about their digital health challenges.

Later in the same week, I was in Dublin as my good friend Richard Corbridge, CIO at Health Service Executive, Ireland had invited me to the ‘Future Health Summit’ to present our Bristol story.

Throughout that week, I was struck by how similar the challenges are, how much we could learn from each other and how critical a strong vision and determined leader are to success.

Richard’s work in Ireland is a great example as he brings a complex programme of work together, taking the best successes from around the world and weaving them into Ireland digital health future.

The beauty of talented leaders is that they make the complex seem simple and obvious, they bring an enthusiasm that drives a team forward and they are unrelenting in the pursuit of excellence. Richard does this; he is a class act.

What about some medical inspiration?

I am desperate to write about a hospital doctor I met last week and tell you about his truly breath-taking research into one of the UKs silent killers. To tell you how he is analysing data created via a shared record programme to create a new intervention that will likely save thousands of lives.

This ground breaking work on data created as part of a shared record between hospital, mental health and GP records also challenges our outdated preconceptions about primary and secondary data use.

It completely blurs this boundary in a good way and opens up a world of possibility. But I signed a non-disclosure agreement to protect his pre-published research so cannot tell you anything about this amazing man’s work. Suffice to say; he is a class act.

A quick update on what’s happening at the BCS?

I could write a piece about my work as chair of the BCS Health and Care Executive. We are working flat out to help BCS live up to its promise to ‘make IT good for society’ in the health and care domain.

I have added two new vice chairs to our group recently. Indra Joshi and Harpreet Sood are joining us as vice chairs for ‘equality, diversity and Inclusion’ and ‘medical’ respectively.

Indra is an emergency doctor by background, but more recently has helped set up the digital disruption service ‘Dr Ed Online’ and latterly has become clinical director for HealthTech Women.

Harpreet is a hospital doctor based in London and member of the senior digital team at NHS England. He has worked alongside Bob Wachter to create his review and has now been asked to lead the development of the Digital Academy programme. They are both bright, buzzing ‘idea factories’ and will bring even more energy to our BCS work. What a pair of class acts.

Or maybe I could do a provocative piece on pies. I am northern after all; and they do represent part of my staple diet. There is a bucket of controversy emerging from my firmly held belief that Holland’s pies would trump Clarkes, Wrights and Pukka in a northern chip shop ‘pie off’ any day of the week.

There are some beautiful metaphors waiting to be drawn about my professional roles too, as I am beginning to realise I have too many pies or too few fingers to maintain the current ‘finger in pie’ ratio.

Working in digital health is giving me a chance to be involved in lots of different things, to have cerebral challenge constantly, to meet amazing people and to feel constantly inspired by what we do.

So if you meet youngsters looking for a career, or doctors and nurses looking for an interesting side line, or a tech genius outside health looking for a new challenge, be sure to tell them how exciting the world of digital health and care is. It’s a class act!!

About the author: Andy uses his roles with Health and Social Care Information Centre, South, Central and West Commissioning Support Unit, British Community Society and as a member of the Health CIO Network to champion digital integration of health and social care. Self -confessed enemy of organisationally centric thinking and the barriers it creates to a better digital future… Follow him @Andy_Kinnear 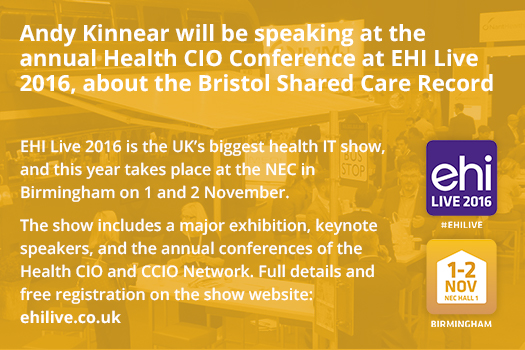