When Andy Williams moved from the private sector to become chief executive at the Health and Social Care Information Centre in early 2014, past digital failures were still lingering in the air.

“There was a long shadow caused by NPfIT [the National Programme for IT],” he recalls. “I think it had been slowing things down over the past few years. We have taken a long time to get going again.”

The NHS is still paying for NPfIT, a multi-billion-pound nationwide programme to create national infrastructure, develop national programmes such as e-booking, and roll out electronic patient records to trusts. It largely failed in the last, and most high profile respect.

And there have been other flawed projects, such as care.data, the project to create new datasets for release to researchers and others, that have left their mark.

In July, the Health and Social Care Information Centre rebranded as NHS Digital, part of an effort to refocus the organisation on fresh efforts to deliver digital transformation.

Williams says that as well as providing its existing and planned national IT services, such as the Spine and whatever comes after care.data, the new organisation is much more focused on supporting trusts to transform themselves.

Beverley Bryant has been a key piece of this change of focus for the renamed organisation. Bryant left her digital lead role at NHS England to become NHS Digital’s director of digital transformation in June, bringing with her a large chunk of the digital delivery work she had previously overseen at the commissioning board.

Much of this work derives from the ‘Personalised Health and Care 2020’ framework, released in November 2014, which set priorities around replacing paper at the point of care and giving patients more control of their health through technology and data.

The National Information Board has since distilled the paperless 2020 vision into ten domains, under which sit 33 programmes that NHS Digital is responsible for delivering.

The sheer scope of these programmes is mind boggling, from a national patient opt-out service to deliver one of the key recommendations of the Caldicott 3 report, to digital referrals, to wi-fi across the country to deliver on a ministerial pledge.

Between now and March next year, there are no less than 50 digital transformation commitments that the organisation is hoping to deliver.

Bryant says while the workload is ambitious, it is important to remember that a lot of the implementation would happen locally, with NHS Digital providing guidance, standards and some national services. “At the centre we can’t do it to the NHS. We have to help.”

NHS Digital board papers from the September show some of these programmes are performing better than others, with effort to improve cyber security resilience tracking well, but plans to set up the HSCN networks that are destined to replace N3 deemed at risk.

But delivery confidence of the paperless programme overall was by “amber/green” by October, indicating the programme was close to on track.

One of the first areas in which NHS Digital is hoping to make a meaningful impact is in digital patient facing services.

This includes building national online identities for patients, a library of apps, and single transactional patient portal through the rebranded national website, NHS.uk, and better integration of patient apps with GP platforms.

Noel Gordon was appointed chairman of NHS Digital in April, partly to speed up some of these programmes. As an NHS England non-executive director, he has foot in both the commissioning and delivering camps, and believes patient service has to be the first target.

“That’s where we have to make the quick wins because we are already behind the population’s expectation.”

Some of these programmes are targeted to come online as early as March next year, and were a major part of the health secretary Jeremy Hunt’s policy launch at the Health and Social Care Innovation Expo last month.

Bryant says another area where quick gains could be made are e-referrals and e-prescribing. Both are already offered as a national service, with widespread use, but added functionality and uptake will lead to improvements patient experience and safety, she believes.

The NHS is made up of a dizzying and ever changing range of organisations; all of which tend to run a dizzying array of national, administrative, core clinical and super-specialist IT systems.

Trying to standardise, integrate and extract meaningful national level information from this array of systems is a huge challenge. Add social care into the picture and it becomes more chaotic again.

NHS Digital has the advantage of the Spine; the creation of which was one of the successful bits of NPfIT. It collects unparalleled trove of national data and the organisation is now pushing to use that information to create more insights.

Gordon says this will be even more important for the emerging models of care and sustainability and transformation plan footprints, which have been tasked with taking forward the Five Year Forward View’s imperative to close an NHS funding gap of £30 billion by 2020-21.

“How do we create a business intelligence service that delivers in line with the way NHS England is shaping the new footprints? There is no dashboard for measuring new integrated care models,” he says.

Another challenge is that there really aren’t enough skilled people out there to make this happen. One of the risks of devolving more responsibility to local organisations is that local staff may not have the expertise to digitally transform.

Bryant says if she was given another billion pounds to spend she’d plough it all into hiring 2,000 leaders with informatics skills. “We’ve got some really great staff in places like Birmingham and Bristol, yet in some other parts of the country they don’t even have the skills to know what to buy.”

Failing an extra billion, Bryant says NHS Digital is putting a lot of time into supporting and upskilling trust staff in informatics.

She remains keen on resurrecting Code4Health, the programme she helped to develop at NHS England to bring NHS staff together to learn and develop new digital solutions. “There is still work going on. The ambition is still there.”

And then there’s Wachter

Further complicating the paperless programme is Dr Bob Wachter’s report into a digital NHS; or, rather digitising acute trusts. It was released in June and has been largely accepted by the government.

Many of the Wachter recommendations, particularly the suggestion that trusts should be divided into groups, and that central funding should be prioritised for more digitally advanced or ‘exemplar’ trusts, fall under NHS England’s purview rather than NHS Digital’s.

However, the review still has big implications for the NHS Digital’s role in delivering digital transformation, particularly the push for upskilling the digital nous of the NHS workforce.

Bryant, Williams, and Gordon all praise the Wachter report, but with caveats. Bryant says she likes Wachter’s “realism”.

However, where the report suggested that the final bits of digitisation might not be achieved until 2023, and that more money might be needed, she says she is still aiming for the existing 2020 target within the £4.2 billion funding allocated to NHS IT over the course of this Parliament.

Gordon says the Wachter report “shows us the way”, but he too is content with current timeline for digital transformation and the money set aside to achieve it. “£4.2 billion is a huge amount. When I compare that to what other industries have, it’s right up there,” he says. “We can always spend more money, but that’s often the worst thing to do in technology work.”

All three, though, are supportive of Wachter’s recommendation to fund digitally advanced trusts first; an approach not without critics. “We need these global exemplars to be able to provide a view of the future we capable of delivering…we need success stories,” Bryant says.

Her caveat is that exemplar trusts should have clear obligation to help other less advanced trusts within their STP footprint.

Waiting for the money

While Hunt made his announcement of £4.2 billion for NHS IT seven months ago, many trusts (and indeed commissioners, researchers, and other groups) are still waiting on details.

So far the Department of Health has indicated that £1.8 billion of that money is likely to go on meeting the paperless 2020 goal, £500 million of which has already been allocated to contracts set-up under NPfIT, with the remaining money split between £900 million in capital funding and £400 million in revenue funding.

The first new allocation was made in August when a £100 million pot was announced for the first centres of global digital excellence, in line with Wachter’s recommendations. An initial list of 12 exemplars was subsequently confirmed.

A further round of “national exemplars” is expected to be announced next month, but it is unclear whether these will be supported by an additional pot of money, or not.

Bryant says decisions on funding are NHS England’s responsibility. But she confirms that there will be no further, paperless funding beyond the £100 million for the 2016-17 financial year. “We always knew the 16-17 envelope was a little lighter than future years,” she says.

Greater clarity on funding, and what it will be used for, will come in the next few months. In the meantime, Bryant says digital transformation can start with organisational change, not new tech or money. “The money is one thing, but if your local organisations don’t get on board it’s not going to happen.” 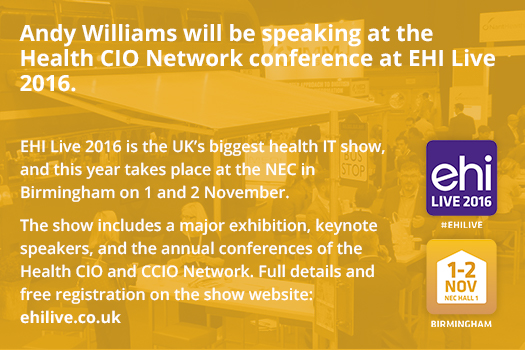