A telephone voice and speech analysis system has been created to assist clinicians monitor, screen and treat patients by detecting changes through their voice.

VoiScan, the unique product under development by Milton Keyes-based company Aculab, has the potential to aid early detection of the many physical and neurological conditions that can affect a person’s voice, such as Parkinson’s disease.

It is achieved through algorithms which are used to analyse the movement of the vocal cords over the phone, which then help clinicians score symptoms such as Parkinson’s disease through detecting changes in a person’s voice. It acts as an aid in the management of certain disorders and diseases affecting speech.

It involves a patient making a phone call and participating in a short series of automated dialogues which are then recorded and analysed. A report is then produced and returned to their clinician straightaway via a webpage or web-based user interface. Content and format can be configurable to suit the healthcare provider.

An Aculab spokesman said using ‘machine learning’ to identify those combinations of voice characteristics, or changes in a subject’s voice, can indicate the presence of a developing neurological disorder.

“VoiScan also has the potential to aid in determining therapy for Parkinson’s sufferers to maintain their ability to communicate, and to counteract the increasing weakness of their voice”, the spokesman said.

“If left untreated this can result in a severe barrier to communication, increasing social isolation.”

Aculab recently collected voice data from two 59-year-old men with similar voices. One participant was healthy and the other suffered from Parkinson’s Disease (see graph below). Both were asked to sound “aah” and the waveforms below show the voice characteristics of each man.

The healthy speech is regular while the speech from the Parkinson’s sufferer is very irregular with high values of jitter, shimmer and a low harmonic-to-noise ratio. 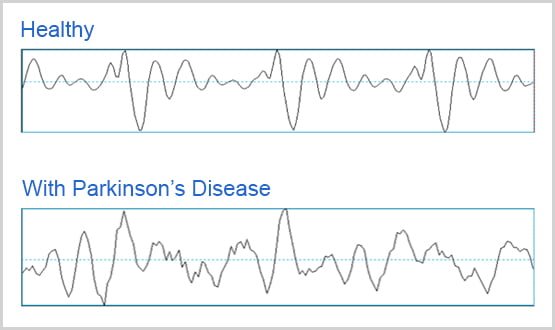 According to the Aculab spokesman, the current system requires face-to-face meetings to monitor the progression of any treatment, which can be costly to the medical practice, in terms of time and resources. He said it also fails to produce any information other than data related to the patient’s condition ‘on the day.’

“VoiScan means a record of regular, interim analyses can be maintained to present the progressive history of the patient to the clinician”, he said.

“It gives the clinician more complete information so they can make a better-informed diagnosis. It gives the patient a sense of involvement in their own treatment, and reduces their need to travel to distant clinics.”

The cloud-based technology is operated on a pay-as-you-go approach where a healthcare provider pays for the system only when it is being used.

While Aculab are seeking partners to take on their product, UK-based company Cinapsis are the furthest on in terms of incorporating the technology.

They use the Aculab Cloud platform for telephony and speech recognition functions and intend to add the VoiScan functionality to their platform so it can offer a service to its customers.

What else can Voiscan be used for?

“Cinapsis will offer a telehealth service to clinicians, doctors, therapists, who will then make it available to their patients. Patients will then call in to the VoiScan platform, via Cinapsis’ service delivery product, using the interface Cinapsis develops on top of Aculab’s VoiScan building block”, the Aculab spokesman said.

Hughes said that VoiScan is a very powerful way of collecting huge amounts of data about the voice. “We see it as something that can add a huge amount of value to patients but that value is only realised when married up to deliver expertise of that data.”

VoiScan measures more than 170 voice and speech parameters such as pitch, volume, breathiness and tone – offering more than other system providers.

“There are a few systems which can provide some of the information from VoiScan, but they are all either expensive, out of date, and/or difficult and inconvenient to use, even by a trained clinician”, the Aculab spokesman said.

The project started as a result of Aculab’s collaboration with the University of Oxford and MIT which involved collecting and analysing a large-scale database of disordered speech.

“We were able to collect samples from almost 25,000 individual volunteers around the world within a matter of days. This shows the simplicity and accessibility of the system over the telephone”, the spokesman said.