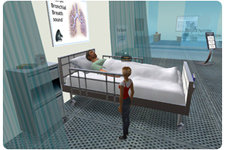 Imperial College, London, is doing ground-breaking work with the NHS in the virtual world, Second Life. Programme lead for virtual worlds and medical media Dave Taylor told Sarah Bruce about some of the projects it is working on.

When the virtual world Second Life was launched in June 2003, it enabled users (known as residents) to interact with each other through a digital persona (known as an avatar).

Residents could explore, socialise, participate in individual and group activities, and create and trade virtual property and services with one another; some of which caught the attention of the tabloid press.

Six years on, however, Second Life is also being used to address a number of more serious issues, not least in healthcare.

Last year, hundreds of NHS managers and clinicians attended an International Clinical Summit in London as part of Lord Darzi’s Next Stage Review of the NHS. More interested parties could attend a parallel conference in Second Life.

Lord Darzi, of course, is also a surgeon and chair of surgery at Imperial College, London. Its department of biosurgery and surgical technology has become well-known for its interest in Second Life. And it is now running a number of projects with NHS partners to improve communication and patient safety.

“Several hundred universities are doing research in Second Life, but we’ve got a really unique take on it,” says programme lead for virtual worlds and medical media David Taylor. “We’re striving to look for evidence of what works in order to make recommendations to the NHS as to what should be adopted in order to really make a difference.”

Taylor joined the National Physical Laboratory in 2004, determined to modernise the way that people, including researchers and government communities, communicated with one another.

When he moved to Imperial College, London he pushed this vision forward by launching a health related Second Life project, in which he developed a ‘continent’ devoted to science and technology called the Scilands. Although the concept might still seem slightly radical, there have been more than 32,000 visitors to the Scilands in less than two years.

Recently, Taylor has been involved in a project with NHS Training for Innovation, which looked at how Second Life could be used as an adjunct to the training staff usually receive.

The trial created an interactive scenario in which nurses were given a short induction and then exposed to a patient in Second Life, who was on an infusion pump with which something was wrong. The nurses had to identify the problem and then fill out a critical incident form.

Taylor explains: “The outcome was that people felt the clinical situation was realistic and the patient behaved in the way they would in real life. They also thought about the same things that they would in real circumstances and said it should be used as part of their usual training.

“The next step is to develop a training simulator that people can log into and then validate the use of that with a much larger group of professionals; we are already talking to NHS Training for Innovation about getting that rolling.”

Taylor says people are becoming more and more open to using Second Life to support healthcare. One illustration of this is a new project that Imperial College has started with Brighton University and Sussex Partnership NHS Foundation Trust.

Taylor explains: “The project is about providing information to adults with learning disabilities who are coming in for a surgical or medical procedure, so that we can ensure that fully informed consent is obtained.

As part of the project, patients will be taken through Second Life, showing them in detail what the medical procedure will entail and what they should expect. The patients will also be accompanied by someone who can explain the procedure if they have a query.

“We’re building the facility at the moment and we have successfully exposed a small group of service users to Second Life. We will then take into account the design of the facility and expect to run the actual experiment in the autumn,” he adds.

Health and social services already have access to many online information services. The government’s flagship NHS Choices not only puts out national-level information, but hosts projects for health organisations looking to target specific groups, such as teenagers.

Many special interest groups and charities also run websites, put out videos explaining procedures and generate patient information leaflets. And many of these can, in turn, be accessed through online libraries, GP and other clinical systems.

Despite this, Taylor is convinced that Second Life offers something different. He says: “We think that in a virtual world, people will have a more personalised experience. If something is troubling them, they will be able to go and look into it and explore in more detail than if they were simply viewing a movie.

“With a movie everyone gets the same experience where as in the virtual world people can spend different amounts of time in different areas.”

Imperial research shows that the average visitor spends 40 minutes on the Sciland and around 40% of visitors interact with another person while they are there, suggesting a high level of engagement.

Taylor is also keen to highlight how Second Life can help to reduce carbon emissions, claiming that if more conferences and meetings were shown in the virtual world there would be less need for international travel.

In June, sessions from the annual NHS Confederation conference were screened on Second Life. Viewers could pose questions to the panels at the conference using Second Life voice and chat by having their questions relayed to panelists by the session chairs.

Taylor summarises: “You can put different groups from across the NHS and on other sides of the Atlantic in Second Life as neighbours. The whole idea is to make the NHS as joined up as possible and we believe that along with improving efficiency, training services and patient safety, Second Life has a role in making this happen.”

Listen to our podcast:

Sarah Bruce talks to David Taylor about the work that Imperial is doing in an exclusive EHI podcast.