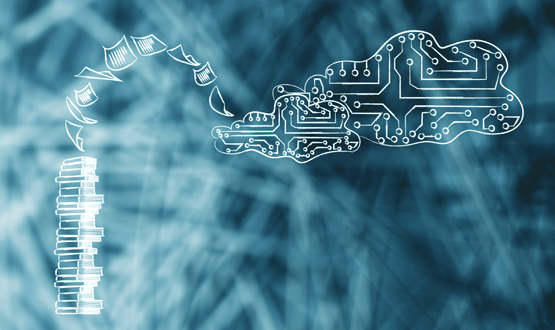 Electronic document management has been seen by many as providing a temporary stepping stone to full digitisation via an electronic patient record. But, as Maja Dragovic reports, some are finding that it can play a much more active long term role.

Johan Waktare is a consultant cardiologist and cardiac electrophysiologist, and he says his work hasn’t involved a piece of paper since 2013. In large part, that’s because Liverpool Heart and Chest Hospital NHS Foundation Trust has a full electronic patient record (EPR) in place. But it’s also because they use an electronic document management solution to manage pre-EPR documents and enable them to be easily called up.

“We took the view that we’re not going to have clinical staff accessing clinical notes after the 26 June 2013 and that was delivered. The EDM is fully integrated with EPR – you can call up historical records of a patient in the EPR and it all comes up.”

It’s an example of how an electronic document management system (EDMS) is increasingly being seen as a crucial element of much broader digitisation. Indeed, Lisa Harris argues the two are inseparable.

“Trusts thought at one point it would be enough to have a robust EPR system to stop production of new paper, and the legacy records at some point will cease to be required,” says Harris, chief operating officer at IMMJ Systems. “Now they realise that is not the case and to make that final jump, the requirement is to get an EDMS product in.”

The need for integration

What that means for vendors is a need for EDMS to integrate fully with EPRs. Vijay Magon, managing director of CCube Solutions, goes as far to describe it as a mandatory deliverable.

Other vendors agree. Advanced, whose Docman product is widely used in primary care, has been tightly integrated with GPs’ electronic patient setups for the past 15 years according to Ric Thompson, the company’s managing director.

“There’s a button within the EPR that will take you straight into Docman EDM platform in the patient context. So, you’re not switching in between products and then searching for a patient again.”

But vendors are also clear that integration has to go beyond just the EPR. “We understand that patient information does not reside in one system, so interoperability between IT systems is crucial to minimise the number of IT systems and to provide confidence that the user has access to the complete patient record,” says Magon.

Paul Sanders of Civica, meanwhile, speaks of a site where their EDMS has integrated into 40 different clinical systems. The company’s general manager of health explains the system either pulls data into the EDMS or accesses other clinical systems via the EDMS.

Adapting to mobiles and tablets

That hints at another reality of EDMS in the modern age: it’s no longer just about processing and storing documents; it’s about having information from the system available at point of care. And that increasingly means embracing non-desktop settings.

Many of the users of EDMS are mobile by nature so system providers are having to adapt their solution to the increasing usage of mobiles and tablets in hospital settings.

“It is really important to be able to access the system anytime anywhere, on any type of mobile device,” adds Advanced’s Thompson.

That is not to say such a shift is challenge free. Sanders explains Civica’s system is used in community settings, the definition of a mobile working environment. “But we quite often run into the challenges of network bandwidth, and the heritage of document management solutions is that it is storing large volumes of data, so you encounter performance challenges.”

If EDMS is supporting a move to mobile working, can it perhaps also support another key shift within healthcare – to greater patient access to data? Sanders thinks so.

“It can help a lot,” he adds. “We are working at a mental health trust where co-production of care plans is really important and, effectively, at the root of that is the EDM solution, which can manage access, retention and all the rules around what information can be shared across the organisation or with patients and carers as well.”

According to Phil Burke, chief project officer from IMMJ Systems, challenges remain in this sphere too, though. Not least among them: how to handle information governance in the GDPR age.

“One of the things we’ve developed is a module for subject access requests with a possibility for redacting information because even before GDPR but now even more, people can access information about themselves and have it provided within a strict timeline,” he explains.

“At the moment hospitals redact information because there may be sections in that medical record that relate to third party individuals.”

But Burke says the potential obstacles along the way does not mean IMMJ Systems are reluctant to look at further innovations for its EDMS. It’s already employing optical character recognition, for instance, to enable automatic categorisation of documents – something that was previously a manual process.

“We use optical character recognition (OCR) of those forms to be able to recognise the document with a high level of efficiency, allowing the clinician to have a filtered view of that record so that he or she can find a prescription regardless of where it was filed in the original record.”

And they’re also exploring using artificial intelligence or machine learning to enhance the smart indexing function. The idea is that after a while knowledge-based systems can recognise certain types of documents such as ECGs.

Advanced are trying something similar, but caution is required according to Thompson. “You always have to be absolutely mindful about the clinical risk. We are starting at a lower end: there are certain types of documents that we can automatically process in a very safe way.

“This might be moving only 10% of that workflow away from an organisation but that equals several administrators that could be used and deployed to do other things.”

The future of EDMS

So just what does the future of EDMS now look like, as fewer records originate in a paper form?

Casper Fons, assistant director of IT at North Bristol NHS Trust, is clear that EDMS is “a temporary thing”. The trust is currently scanning all its historical documents, a process it anticipates completing in 10 months’ time. From there on it, he sees EDMS as serving as a static repository for legacy documents.

“Ten years from now, when the full EPR solutions are implemented, EDMS will just sit there as a historical storage,” he reports.

Waktare, however, offers a different view. He believes that EDMS has a very active future role to play.

“Hospitals generate such diverse clinical data so you don’t want to be integrating every single piece of equipment, be that your ITU monitors, blood oxygen measurements, your 24 hour ECG reporting and so on. So, for me, the EDM is a natural way of pointing all of that data into the EDM and then using the EDM to surface it within the EPR,” says Waktare.

“This leads to a union of the two systems, a happy marriage where EDMS can ‘serve’ unstructured records into EPR systems.”