Doctors, nurses and carers, watch out for your jobs. The future of medical care is here—and it is not human.

Humans compare unfavourably with robots, tiring easily, taking longer to train, needing special fuel, being expensive to maintain, becoming easily bored by repetitive tasks—and—you just can not get the spare parts for them.

In 2004 the United Nations’ annual World Robotics report said that by the end of 2007 four million robots would be doing jobs in homes. But not only in homes: they now work on wards, carry out surgery and monitor and reassure the elderly and frail.

Robots are a combination of software and mechanical parts. They are easily trained and have a long working life—some can even replicate themselves. In essence, they can be regarded as a moving array of sensors which allow them to see, gesture, navigate and communicate.

Japan has 44 per cent of the world’s industrial robots and is applying that expertise to healthcare. This is fortunate, as it has the most rapidly ageing population in the world.  Around 30 million of its citizens—accounting for 25 percent of the population—are over the age of 65.

Some of Japan’s aged are comforted by Primo Puel, an interactive doll that talks, giggles and even asks for a cuddle, thereby helping to reduce the loneliness of longevity.

But there is more to such robots than superficial cuteness. They monitor the aged, building up a pattern of their daily lives and watching for variations. If they spot something unusual, they alert relatives or carers to a possible problem.

Mitsubishi recently showed off its one-metre-tall, smooth-talking amanuensis Wakamaru. Available in male or female editions, it recognises up to 10 faces and understands 10,000 words. It is expected to cost about £8,500.

Wakamaru can watch owners’ houses while they are away (presumably with no chance it throwing sneaky parties with its friends) and can also monitor the sick. It is powered by rechargeable batteries and moves around on wheels. 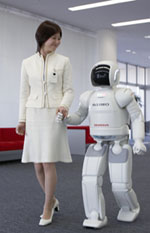 No wheels are needed for Honda’s new, 1.3m tall version of ASIMO (Advanced Step in Innovative MObility, pictured right) unveiled in December 2005, because it is one of the world’s most advanced bipedal robots.

ASIMO has been enhanced with a new selection of sensors—the key to future robot development. Using visual, ultrasonic and floor sensors it recognises its environment. Moving with the aid of an eye camera and using wrist kinaesthetic sensors, it gives and takes objects.

New ASIMO displays a greater ability to work harmoniously with humans. It can walk while holding a person’s hand and carry objects using a trolley or cart. Now ASIMO is capable of more grunt work, Honda says that it will concentrate on developing its intelligence, enabling it make judgements in various situations.

“ASIMO has been created as a new form of mobility. In the long term, it should allow you to execute a task without having to move yourself,” explains William de Braekeleer of Honda Motor Europe Ltd. “We see ASIMO as an aid to the nurse, taking care of the heavy aspects of their tasks, allowing them to spend more time with the patient.”

Robot care in the UK 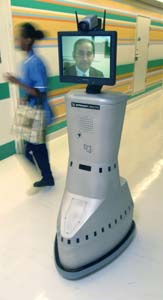 Mr Sains is researching a series of remote presence robots manufactured by In Touch Health. Recently the unit has upgraded to the RP7, which resembles a large vacuum cleaner base carrying a monitor and a camera. The robot operates over a secure broadband Internet connection, and doctors control it from a console using a joystick. Last year, the unit was using the RP6 robots, one of which was dubbed ‘Sister Mary’ (right).

The RP7 mimics the head movements of humans in conversation, helping make face-to-monitor contact with a patient more intuitive. The robot is deployed in A&E and on a surgical ward.

Surgeons at St. Mary’s also routinely use the remotely operated da Vinci robot to perform urological, cardiac and gastrointestinal surgery, as well as for teaching.

Mr Sains explains that robots like the da Vinci can be seen as continuation of the general development in surgery from open to minimally invasive surgery.

Mr Sains explains that the robot’s endo-wrist restores freedom of movement in laparoscopic surgery almost to that of a human wrist. In addition, a surgeon’s hand tremor, magnified by the lever-effect of the long, laparoscopic instruments, is eliminated and visibility improved by the stereoscopic view given by the robot’s two lenses.

Surgical robots do not work independently and need human remote control or voice activation. However, they do make a surgeon’s job less tiring, especially when such procedures may last for three hours or more.

Well, alright. Though all of these developments are exciting, robots are still some way from the walking, talking, thinking machines of the movies. So, carers do not have to collect their P45s yet.

As to whether healthcare robots will live up to expectations, I’ll be back to answer that.