In the Digital Health hot seat this week is Dominic Bullas, CCIO of Barnsley Hospital NHS Foundation Trust, who reminisces about his days as a MicroProse fanatic and explains why removing a trust IT system is so much harder than putting one in.

When did your interest in IT begin?

The Commodore 64. I probably don’t need to say anything more. It was a computer of epochal cultural significance, capturing the hearts and minds of millions of impressionable youngsters around the world. The hours I spent playing old MicroProse simulations was unhealthy! And when I was old enough to watch films like Blade Runner, 2001: A Space Odyssey, Alien, and Terminator, it really felt as though computers were ready to take over the world.

How and why did you become an NHS CCIO?

It was more by happenstance than design. I was involved in a difficult case in which diagnosis and treatment was delayed because a critical piece of paper had not moved from one part of the hospital to the other. I felt a burning injustice that technology had not prevented such an error. A few weeks later, Tom Davidson – our newly appointed director of ICT – advertised the CCIO post.

What is the most important part of the CCIO role?

Having a healthy disregard for entrenched orthodoxy in digital health, with the aspiration that a group of talented and ambitious individuals with a coherent digital vision can achieve so much more.

The clarity of vision, the unbridled passion and the endless politicking that was required to persuade executives and governors to dramatically shift course and replace the incumbent EPR – barely four years into its implementation – with one more aligned to the needs of the people of Barnsley. If you thought that putting in an EPR was difficult, try taking one out of a trust.

What will be the most significant development in health and care over the next 12 months?

I think we will start to see the fruits of the global digital exemplar (GDE) programme. When the programme was first announced, I really couldn’t understand it. Why give a load of money to cash-rich, digitally-mature trusts? It sounded ridiculous. However, it became clear that for smaller trusts such as Barnsley, it was the perfect platform on which to build and sell our own digital strategy.

What’s the largest barrier to being a more effective CCIO?

Trying to battle digital apathy in a clinical audience that is exposed to the vagaries and ravages of daily working pressures, both clinical and organisational.

Leadership. CIOs, CCIOs and CNIOs have critical roles not only in changing and challenging working cultures using transformational digital processes, but in defining the digital agenda. Representation at board level is the only way to secure this.

If you have one piece of advice for other NHS IT leaders, what would it be?

Spend the money before someone takes it from you.

However, now there seems to be a recognition that allowing in-house programmers to build complementary solutions based on open standards adds huge value.

What are the most over-hyped and under-hyped digital innovations in health?

Never been a fan of Choose and Book [now evolved into the NHS e-Referral Service]. Asking a non-specialist to deliberate with a layperson about the appropriateness and timing of a referral to secondary or tertiary care, and then slotting them into a specific clinic, engenders inefficiency.

While we are bombarded with projections of the near-divine rewards of AI and deep learning, any  technology that quietly and unassumingly delivers a paperfree solution has my attention.

What’s the worst job you’ve ever had and why?

Working as a medical secretary in the summer months for an admittedly lovely yet verbose consultant psychiatrist while my friends performed the same role in the monosyllabic world of orthopaedics. I still do not think that my index fingers have recovered from tapping out the herculean, four-page clinical biographies every time she saw a patient.

If you could travel back in time to meet one person, who would it be?

My father. I miss him.

Sky Q. It was the only way to ensure that my wife has unhindered 24/7 access to Friends reruns. I feel part of the show now. 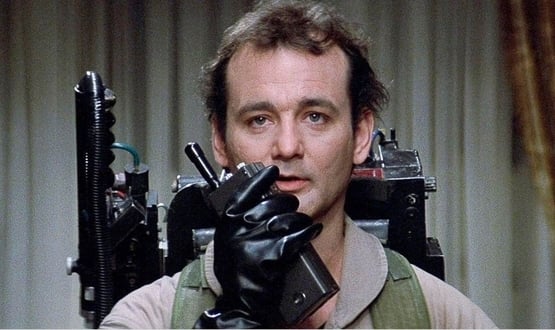 Dominic Bullas would like to be played by Bill Murray in a film of his life. Copyright 1984 Columbia Pictures.

Matt Hancock has published a tech strategy founded on open standards, innovation and encouraging local choice with a move away from reliance on mega-suites. But...