Health services often talk about ‘transformation’; and sometimes about using IT to support that. Yet the number of projects that really rethink ways of working, and that use technology to deliver something that is more efficient and more convenient for patients, are surprisingly rare.

Perhaps the sheer scale of what can be required is the problem. Take Pharmacy 2U. It started out as a website offering to fulfil private prescriptions back in 1999. Now, it’s the NHS’ largest contracted pharmacy; made even bigger by a merger with rival Chemist Direct last month.

To deliver its services, it has not just digitised its paperwork, or tweaked the High Street model of dispensing medicines.

Over the years, it has taken on vested interests and regulators, helped to shape the Electronic Prescription Service and, most recently, opened a state of the art ‘medication hub’ in Leeds capable of dispatching a million prescription items a month.

The centre – from the outside, an unremarkable shed in a particularly unremarkable part of Leeds – doesn’t so much ‘transform’ the business of a traditional chemist as re-think it; a point that chief operating officer Daniel Lee underlines.

“We were the UK’s first internet pharmacy, so it has always been our mission to harness technology to give patients new ways to access pharmacy services,” he says. “Over the years, we’ve developed new platforms so we can share these with many more patients.

“We started thinking about the move to this facility four years ago now, because it’s a big thing to set up. We have implemented some powerful systems to convey prescription items, while making sure the clinical accuracy of [what is being dispensed] is industry leading – we are reaching 99.98% accuracy level.

“That means there is the potential, with the continued roll-out of EPS, for patients to experience a very different kind of pharmacy system.”

Inside the shed, there is some very fancy technology. Pharmacy2U says it has spent around £3.5 million on the hub to date, and that has paid for some sophisticated IT, a number of pharmacy robots, conveyor systems that have attracted the attention of magazines devoted to logistics, and some state of the art packing machines.

However, Lee emphasises that the point of all this is to make sure that the people who work at the centre apply their skills at the points that they are needed.

“The key thing is to use people’s skills,” says Lee. “The traditional pharmacist will do a lot of things, from serving customers to labelling medicines. In our system, the pharmacists do the clinical work that they spent five years at university learning to do.”

Don’t the pharmacists miss dealing with customers? Apparently not. One of those on shift says she likes working in these conditions. “it’s very different from retail, but you can focus on being a clinical pharmacist,” she says.

“You can check information, whether there might be any adverse reactions, whether the patient needs a medication review. You get to do the job you were trained for.”

Out on the hub floor, the dispensing process starts with a green box, or tote, being launched with a barcode relating to a particular patient. It runs along the Reflex conveyor system, provided by a company called Logistex, until it reaches a station where a human picks any items that won’t go into the robots. 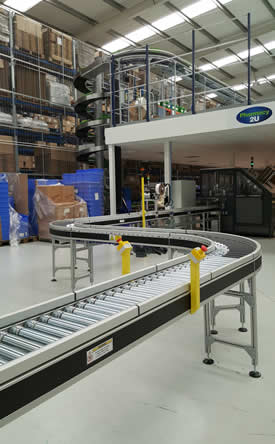 Totes set off on their journey around the Pharmacy2U medication hub 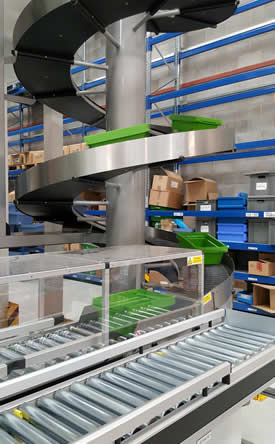 After that, it heads up a spiral to where there are two, large dispensing robots from BD Rowa that can hold 80,000 ‘slower moving’ items, that can be picked in seven to eight seconds (around 30,000 ‘fast moving’ items can be ‘picked by light’ in just three to four seconds).

“At the moment, we have two robots with space for two more,” says Lee. “They are working eight hours per day, but have the capacity to move to 16 hours per day. The tote comes up the spiral, and sends a message to the robot to say what it wants, and the robot picks it and drops it off.

“The key thing here is the integration between the IT system and the conveyor system.” The tote then comes down through the quicker pick to an auto-labelling area, after which a pharmacy technician scans it and its products and checks they are all labelled correctly, in a three-way barcode verification process. 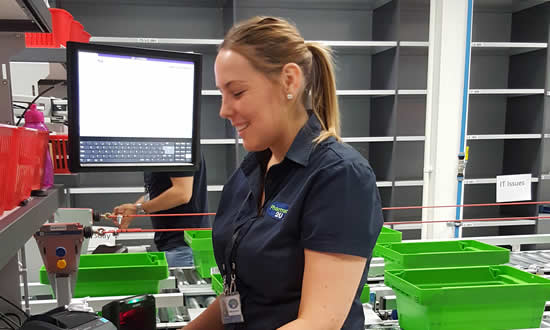 From there, the tote goes off to a packing station, where the packing machine from B+ Equipment works out how deep the contents are, so the packaging can be folded down to match to reduce waste and postage costs.

A packing machine wraps a completed prescription, before posting by Royal Mail

The packing machine can handle 900 boxes an hour; almost all of them destined for one day, tracked delivery by the Royal Mail – which emails or texts customers to let them know they are on the way. “We use Royal Mail and they have really upped their game, particularly on communication, which is very important to us,” says Lee.

Using technology where they’re not

This carefully thought-through, capital intensive process, has taken time to evolve. Lee graduated from Sunderland University in 1991, and initially joined his family firm, which ran four pharmacies in Leeds.

In 1999, while looking for information about a medical condition for one of his family, he came across an American online pharmacy, Drugstore.com, and wondered if the idea would work in the UK.

Pharmacy2U launched in November, and almost inevitably attracted ‘concern’ from the British Medical Association and Royal Pharmaceutical Society; which sent out a delegation. Perhaps surprisingly, this was generally positive about the venture, and the society eventually amended its code of ethics to accommodate mail order and internet businesses.

Initially, the company fulfilled private prescriptions (and used its vans to deliver for other pioneers of online retailing, including flowers for M&S, according to an early article in the Pharmaceutical Journal).

But its big growth opportunity came with the development of the Electronic Prescription Service, one of the projects set in train by the National Programme for IT in the NHS.

Pharmacy2U piloted the project; which enables GPs to issue an electronic prescription to a pharmacy ‘nominated’ by a patient. Lee says GPs have become used to EPS: which is particularly useful to both doctors and patients for repeat prescriptions.

Patients can also use the Pharmacy2U app or call the company to request items; with first time contacts and long-term users offered medication reviews.

Requests have to be dealt with by a GP, but Lee emphasises that one of the features of the service is that “patients can present to us when they want” and “people can check their requests on their iPad on the sofa, or review them over their lunchbreak” if that suits them.

Lee is convinced there will be more disruption to come. He points out High Streets can still have clusters of traditional pharmacies competing with each other, but the government wants a slimmed down, more innovative service and this will, in itself, put this model under pressure.

“GPs and primary care services are increasingly moving into new health centres, and pharmacies should be changing alongside them,” he argues. “I am sure there will soon be other pharmacies making this part of their mix; but we are proud of doing things differently, so that has to be a good thing.” 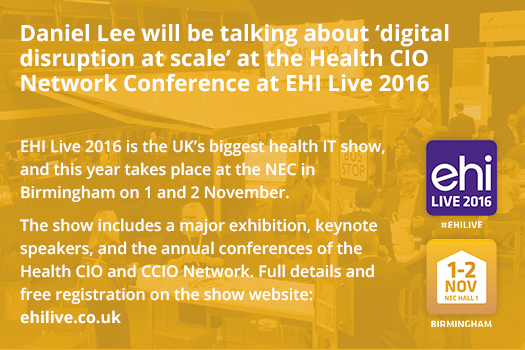 Leaving computers logged-in is a security risk and it can be a patient safety risk. To stop it happening, techies and medics need to understand...