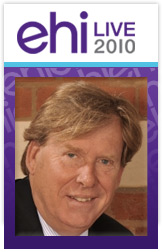 Health minister Simon Burns has been announced as a keynote speaker at eHealth Insider Live 2010.

The minister, who was given responsibility for NHS IT and the NHS Connecting for Health agency in May 2010, will be addressing the conference and exhibition at 11am on Tuesday, 9 November.

“It’s some time since we have seen a government minister at a major UK healthcare IT conference, so Simon Burns’ decision to attend EHI Live 2010 is especially welcome,” said Linda Davidson, director of eHealth Media.

“At a time of great change in NHS informatics, I’m sure a presentation from this important member of the coalition government’s health team will attract a large audience – and that he will be listened to with great interest.”

EHI Live 2010 is a two day exhibition and conference organised by eHealth Insider at the NEC in Birmingham from 8-9 November.

It will be the first major health IT gathering since the coalition government took office and the first big opportunity to discuss the major changes and challenges that lie ahead.

Other confirmed speakers include Tom Steinberg, founder of mysociety.org and member of the government’s new Public Sector Transparency Board, and many high profile members of the healthcare informatics community.

He has been Conservative MP for the Chelmsford area since June 1987. During his Parliamentary career, he has been involved with health policy on a number of occasions.

In his present role, he has launched a review of consent to and use of the Summary Care Record in the NHS, as part of a wider review of how information and technology can best be used within the health service. An informatics strategy is promised this autumn.

Full details of the event can be found at www.ehilive.co.uk

Online registration opens later this month or you can pre-register by emailing events@e-health-media.com