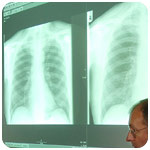 The dictionary tells us that a chimera is ‘something hoped for but illusory or impossible to achieve’ but the radiological community is working towards making its own chimera very real indeed.

The acronym ‘chimera’ stands for cardiology, histopathology, mammography, endoscopy and other radiological objects. At UKRC 2008, consultant radiologist, Dr John Somers of Nottingham City Hospital, who is working with England’s PACS programme, gave an update on progress in bringing these different areas of work into PACS.

PACS as the imaging repository for all images is the aim, he explained. But he listed a set of challenges that lie ahead before all images can be routinely called up on PACS: lack of RIS, lack of DICOM, lack of integration into workflows and huge datasets which place demands on storage and network capacity.

He examined each area of work individually:

Cardiology images should be the easiest to integrate into PACS, though the specialty produces large data sets – calculated at 160 terabytes a year. However, all major PACS vendors have cardiology in their portfolios and implementing cardiology imaging on PACS should be ‘a case of will’, Dr Somers said.

Some US laboratories report using ‘virtual pathology’ but none yet have FDA approval. Huge data sets are a problem along with a lack of standards. Dr Somers said the PACS programme had decided to concentrate on selected images which could be used to support multi-disciplinary team meetings.

Symptomatic mammography is supported by PACS provided under the National Programme for IT but the breast screening programme is run separately and based on film. The screening service also does all the scheduling and sends out invitations. The renewal date is 2010 and Dr Somers reported that the screening service was developing a new system to integrate with PACS and the Spine.

He predicted some difficulties in the first two years because radiologists will have to deal with both film and CR when making comparisons.

Currently endoscopy has no RIS and no DICOM or IHE standards and potentially makes complex demands on imaging systems such as the need for video and snapshot images embedded in reports and immediate reporting.

This area of work includes the integration of images from areas such as medical photography, dermatology and retinopathy into PACS. It is an area of work supported by DICOM standards and IHE standards are in development. However, Dr Somers pointed out that these types of images could be integrated using the RIS as a scheduling tool and a DICOM converter such as PACSgear.