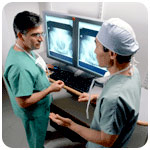 Digital imaging has been rolled out to hospitals across England. But the original vision for PACS included data stores to hold and enable the sharing of images. With the vision yet to be realised, regions and individual trusts are looking for alternatives. Linda Davidson and Daloni Carlisle report.

The roll out of picture archiving and communications systems is hailed as one of the big successes of the National Programme for IT in the NHS. Without a firm push from the centre, it is doubtful that England would have universal coverage of hospitals with high quality technology.

Now, there is another opportunity – one where it is not quite so clear that a central drive can deliver: image and report sharing. It is an area of PACS development has proved controversial.

Wales has just announced an image sharing pilot with a view to developing a national solution. But in England, there are only interim solutions.

The original vision for PACS in England included a central data store in each of NPfIT’s five clusters. The idea was that this would act as a central database to enable data sharing across the whole cluster and provide online backup for all radiology and other diagnostic studies.

To date, no such central data store and back up facility exists. A paper about the situation in the North West says the central data store provides online backup facilities for trusts’ local PACS short-term storage, but does not enable data sharing and does not hold radiology reports.

This has left regions and trusts looking for interim solutions. Discontent about this surfaced in March, when the Royal College of Radiologists produced a report about PACS and image sharing that was critical of NHS Connecting for Health, which runs the national programme.

In the absence of automated image and report transfer, the college said that time-consuming processes such as DICOM Push, remote web access and the transfer of information on encrypted CDs are needed to get access to images and reports generated in other NHS trusts.

The college was keen to see England adopt the international standards, XDS-I (Cross Enterprise Document Sharing for Imaging) from Integrating the Healthcare Enterprise.

Erika Denton, medical director of PACS and clinical lead for diagnostic imaging at the Department of Health, is only too aware of all this. “I have been part of CfH for nearly five years and I have to say that we are not at the point now that we thought we would be when I joined.

“Some of the co-dependencies and the technological challenges have been unexpected and not things that we could have planned for.” It has been frustrating, she admits, although she says things are now moving along apace. “At the moment we are focusing on doing what is clinically necessary,” she says.

“Getting image sharing up and running so that we can deliver safe clinical services, especially in stroke and trauma services where there is a specific and clear need to move beyond sharing images on a CD to electronic transfer.”

Ultimately, CfH wants trusts to be able to push images from one to another and to have many links to their different sites, so images can be viewed by different specialists. In the meantime, Dr Denton says, interim solutions are beginning to work well. A number of trusts are developing web-access for GPs to view images, for example.

In London, the Independent Exchange Portal, originally designed to allow secure image exchange between the NHS and the independent sector, is on schedule to roll out in July 2009, delivering secure routing of DICOM images supported by NHSmail.

The DH, which commissioned the IEP, and CfH, which implemented it, are now looking into wider trust-to-trust application for the system.

Four trusts are already using PACS Exchange, an NHS London initiative that enables diagnostic images generated on trusts’ existing PACS to be sent to a secure, centralised electronic sharing system where they can be viewed across the capital. “We expect it to be rolled out across London early next year,” says Dr Denton.

Tactical in the North West

Meanwhile, in the North West a PACS Data Sharing Project has created the NHS PACS Web Portal. This was described in a paper released to E-Health Insider as “a co-ordinated mechanism for clinicians to request remote access to PACS, if needed, to support patient care.”

It works by giving authorised users the facility to log-on via remote web access to participating trusts’ PACS to access images. By the end of March 2009, there were well over 300 PACS accesses through the portal on weekdays, about 100 on Saturdays and around 50 on Sundays.

Currently, 44 trusts have signed up to use it, the heaviest users being Salford Royal Infirmary, the Christie Hospital, Wythenshawe Hospital in South Manchester, Central Manchester and Manchester Children’s Hospital and Pennine Acute Hospitals.

The portal is the product of an impressive local effort led by CfH PACS lead and radiology clinical director at the Christie Hospital, Dr Rhidian Bramley.

Any image sharing scheme requires technical problem solving and agreement on information governance between institutions. Extensive work in both areas was needed to set up the portal and refinements are ongoing. Crucially, the paper concludes that the approach taken in the North West is cost-effective.

Despite this, the leaders of the NHS PACS Portal agree that the solution is a tactical response to the need for image and report sharing, until a strategic approach is available.

“The costs and benefits report on the portal demonstrates it is possible to do this at minimal cost, and this can provide clinical benefits and cost efficiency savings compared to using CDs.

“The NHS chief executive’s guidance also recommends that remote web access and point to point data sharing should also be used to address the current risks around sending images on portable media. There are therefore three good reasons why trusts should be doing this in the interim until the strategic solutions are available.”

Frimley Park Hospital NHS Foundation Trust in Surrey has piloted Global Accessibility and Collaboration solutions from ISEEU Global in its ICU, making sharing diagnostic images part of a much wider project. It has been so successful that the trust is now extending it to all consultants as a full service.

The solution allows access to live patient data but does not pose security risks to sensitive information. Unlike typical VPN solutions, the secure technology does not allow two-way open access, nor does it ‘move’ data around meaning real-time data viewing and without restrictions on the file type or size for data transfer.

For PACS, it means images can be viewed from any desktop or laptop anywhere in the world by members of a multidisciplinary team.

Dr Loua Shaikh, consultant anaesthetist and intensivist at Frimley Park trust says: “A picture really does tell a million words. Where in the past I would have a junior doctor calling me at home at 3am and trying to describe a chest x-ray, I can now see it on my screen at home.”

In one instance, he was able to check whether one of his juniors had ordered an x-ray and, finding he had not, to order it himself – all while waiting for a plane at Tokyo airport.

“In the past I would have had to go into the hospital once or twice a week during my on call nights,” says Dr Shaikh. “In the year since we have started using this system I have gone in twice and both times because of manpower shortages.”

Some of this has gone some way to pacifying the Royal College of Radiologists. Tony Nicholson, dean of the faculty of clinical radiology, says: “We have had very useful meetings with CfH since March. That has produced a greater understanding on both sides of where the problems lie. I think CfH are sorting things out as best they can.”

He adds: “I think realistically we are going to have to accept that in the short term the sort of national data sharing solution that was proposed initially is not practical. Slowly but surely we are seeing interim solutions being rolled out. They are not perfect and we still stick by the adoption of XDS and XDS-I as the long term solution.”

So, has CFH snatched defeat from the jaws of PACS victory with this halting start to image and report sharing? Or should the PACS community follow the North West and others with tactical solutions, while looking forward to a future strategic solution, probably based on the document and image sharing protocols, XDS and XDS-I?

Dr Bramley says: “PACS is delivering significant clinical benefits and I do not believe we could have delivered the same level of benefits across England, in the same time, without a national PACS programme.

“I agree it is important for CfH and the LSPs to see through the work needed on image sharing, and the greater the benefits the more cost effective the systems should be compared to standalone PACS solution.

“I think it is fair to say we have moved away from standalone systems through the CfH national image sharing policy, and the NWSHA initiative is now enabling a community and clinical network wide view of PACS which goes some way towards meeting the vision outlined in the outline business specification for the NHS Care Record Service. From the NWSHA perspective this has been a very good investment.”

This article was originally published as part of E-Health Insider’s Special report: PACS/RIS.