Hospital and GP records for 1.5 million patients are to be available for the NHS to share in a ground-breaking project launched ahead of the national NHS Care Records Service.

The Clinical Data Repository (CDR) set up by Hampshire and Isle of Wight Strategic Health Authority has gone live this month with GP records for 650,000 patients, nearly half a million hospital documents and 2,000 single assessment process (SAP) records already available to view and more due to be added soon. 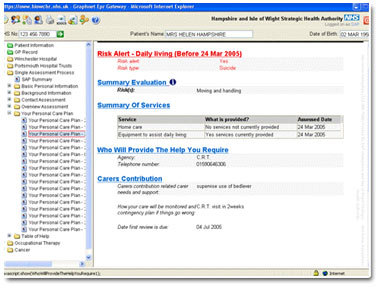 The information was uploaded to the CDR after an extensive local publicity campaign to the 1.5 million patients in Hampshire and on the Isle of Wight, which advised people of their right to opt-out and gave them an opportunity to view their records before they were uploaded on to the system.

Out of 1.5 million patients in the area, only around 1,150 patients have so far chosen to opt out. Once uploaded, patient records may only be accessed with explicit informed consent from patients.

The system creates a common record with different views according to the role of the member of staff with a series of easy-to-view screens covering everything from past medical history, GP medication, hospital medication, laboratory results, community nursing contacts, out-of-hours contacts and details of hospital care.

Information from GP practices is updated each night with 76 practices currently linked to the project, based mainly in the south and west of Hampshire, and plans in hand to extend coverage to the east and north of the county as soon as possible.

The SHA says it anticipates all GP records being on the system by autumn this year and the intention is to run the system until the delayed NHS Care Records Service (CRS), being developed by the NHS National Programme for IT (NPfIT), becomes available – now projected to begin in either 2007 or 2008.

The consent model for the initial upload of information to the repository is on an opt-out basis as proposed for the NHS CRS – a system which has failed to win the support of both the British Medical Association’s General Practitioner Committee and the Royal College of General Practitioners.

However Dr Nigel Watson, chief executive of Wessex Local Medical Committee (LMC) and a GP in Hampshire, said the project had received the full backing of the LMC. He told EHI Primary Care: “The team has spent a long time working with the LMC on this and thrashing out the issues. As far as I am concerned I think this could definitely save lives and I am quite comfortable with it.”

Dr Watson, a member of the GPC, supports an opt-out model for the NHS CRS and said that he believed that trust in those running a system was key to its support.

He added: “We have worked quite closely with the people that have been doing this and we trust what they have done. There is a lot of paranoia about, some of it perhaps justified, and the fundamental issues are not necessarily about the technicalities of how a system is run.”

A spokesperson for the SHA said 750,000 leaflets were delivered by Royal Mail to households within Hampshire and Isle of Wight during January to March 2005 outlining the CDR. In addition, leaflets are available in hospital and GP practice waiting rooms and practices have been asked to give the leaflet to all newly registered patients.

A press release was also sent to all newspapers, radio and television stations within Hampshire and Isle of Wight.

She added: “There have been approx 4,000 phone calls from the public in response to this initial campaign that ran last year. There continue to be two to three phone calls a week from patients picking up the leaflet in the waiting rooms requesting more information.”

The CDR is accessible over NHSnet and is designed to be used by clinicians working in out-of-hours, accident and emergency departments, GP practices, hospital pharmacies and in the community. Eight out of ten out-of-hours services within the SHA have agreed to use it. Records will be available for any staff treating patients to view, subject to password control and the explicit consent of the patient being treated. An audit trail identifies when patient records have been accessed and by whom and patients can ask for a copy of the audit trail.

Just over 1,000 NHS staff currently has access to the CDR and there are currently more than 10,000 NHS staff logins a month, less than two weeks after its official launch.

Only Read coded clinical data is downloaded from practices with free text suppressed as part of a move to protect patients’ confidentiality. The system is capable of accepting records from all the major GP system suppliers,

In addition, hospital records from 460,000 patients are currently on the CDR from Winchester, Southampton and Portsmouth hospital trusts. Work to include documents from north Hampshire and the Isle of Wight hospital trusts is continuing.

Further developments will include a project to enable electronic transmission and upload of hospital correspondence to GP systems and analytical services to support cancer services, practice based commissioning and local clinical audits.

The technology behind the CDR in Hampshire and the Isle of Wight has been delivered by Graphnet Health.

Tony Sharer, Graphnet’s operations director, said the keys to the success of the scheme had been the project’s ability to get clinician and patient buy-in and the work that had been done on data quality.

He added: “You have also got have a flexible technology to construct these things so it can be bent and shaped to what people want.”

In addition to GP and hospital records the CDR will also hold occupational therapy records, with record for 13,500 patients already on the system, and single assessment process forms which social services staff can access.

The work in Hampshire stems from the area’s involvement in the Electronic Record Development and Implementation Programme (ERDIP) between 2000 and 2003.