In February Google announced a pilot project with the Cleveland Clinic to provide hundreds of clinic patients with tools to collect, manage and store personal health records online. Having created a record users can decide who they subsequently make it available to.

On Monday, Google made these PHR tools publicly available, allowing anyone in the US to use the PHR developed together with the Cleveleland Clinic. In the two month trial was over-subscribed and the Cleveland Clinic found that its patients were eager to use the Google health records. 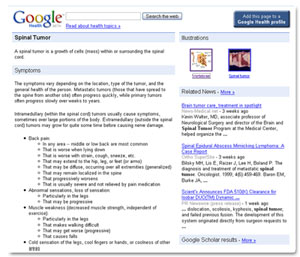 The central concept is that the PHR should provide a way for users to hold and manage information from the many healthcare organisations typically involved in their care, and become a single searchable source of health information and advice.

To open a Google Health record a user must first set up a profile including details of age, sex, height, existing medical conditions, medications, allergies, procedures, together with details of tests, results and immunisations. Users can also enter some information directly into their PHR, ranging treatments they’re receiving from other doctors, medical history, allergies, or the drugs doctors have prescribed to them.

Officially only open to US consumers the service does allow anyone registered with Google to set up an initial profile and alerts. Google chief executive has previously made clear that he plans to offer the service internationally.

Having created a record a user can then elect to share that information with their doctors and other providers and use a range of online tools to do things such as track the risk of a heart attack or connect to a specialist for a second opinion.

So far users have the choice of sharing "all or none" of their Google PHR information with specific parties, like doctors. However, Google says in the future it will allow users to decide what pieces of information from their PHR they’d like to share. The firm also says it will not sell user data.

Google says it hopes the service will drive users to its search results and search advertising, and “currently” has no plans to advertise in Google Health.

Third-party alliances with different healthcare organisations are a key part of Google Health strategy, enabling different organisations to provide electronic data to the Google PHRs. Users can choose to go to links and request that data be automtically inputted to their Google PHR from third parties

So far Google has integrated with a relatively small number of major partners, including Beth Israel Deaconess Medical Center and Quest Diagnostics Inc, together with pharmacy chains like CVS, Walgreens, and Longs Drugs.

Google joins a growing number of US firms, such as WebMD, Revolution health and Microsoft with its HealthVault initiative, now offering PHRs, to capitalise on the trend of people increasingly seeking health information online, and the potential of internet tools to help consumers manage their own health care and medical spending.