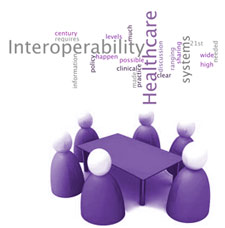 Are international standards the most important factor in healthcare interoperability? A reader poll ahead of the Healthcare Interoperability conference in Birmingham decided that they were. But what would expert debaters and their audience think on the day? Fiona Barr reports.

Are international standards the key to long-lasting success in healthcare interoperability – or are they sometimes doing more harm than good? That, essentially, was the question posed by those speaking in the debate at E-Health Insider’s Healthcare Interoperability conference in Birmingham.

Paul Woolman, ehealth information architect in the ehealth directorate of the Scottish Government, proposed the motion that: “This House believes that international standards are the most important factor in achieving interoperability in healthcare.”

He argued that interoperability is not only about achieving the technical transfer of data, but also about ensuring that the clinical meaning is understood. To get that to work, successful international standards are essential, he said.

“You can do things with local solutions but to do things that last for a long time you need international standards,” he added.

His view was backed up by Philip Scott, a board member of HL7 and head of IT projects and development for Portsmouth Hospitals NHS Trust.

Scott argued that standards were not a bar to life in the real world and standards such as those used in debit cards were proof that international standards could work. “Standards have to be international because vendors are operating in a global market,” he said.

The case against the motion was put forward by Martin Strange, head of health IT at Lloyds Pharmacy. Strange said he believed that some standards were “the greatest impediment” to interoperability and that open, national standards were much more important. He said these could retain flexibility while delivering functionality and: “We need that flexibility.”

Strange was backed by Ian Herbert, an independent health informatician and vice-chair of the British Computer Society’s Health Informatics Forum.

“What actually matters is reliable and consistent use of standards, and international standards don’t make this any easier,” he said.

The four debaters were questioned about the commercial impact of different standards on suppliers who want to market their software worldwide.

Woolman said there was evidence from the medical devices market of big companies being willing to work together on standards to try and defer some of the costs – which could then benefit smaller suppliers.

But Herbert argued that while international companies liked to work to international standards this could also be a bar to innovation among smaller companies. He said that, for example, the cost of getting products tested by NHS Connecting for Health, the agency that runs the National Programme for IT in the NHS, could be prohibitive. “Some of these complex standards are actually doing some harm as well as good,” he said.

Dr Mary Hawking, a GP in Bedfordshire, asked whether international standards should be introduced for information itself, given that healthcare interoperability was all about moving patient data around.

Scott responded that clinical practice differed across the globe and that achievement would have to be limited to some sort of summary, highlighting the proposals for a European health record summary.

Others in the audience suggested that introducing standards for clinical content was critical before anything else was tackled. The newly-published standards developed by the Royal College of Physicians were welcomed as a good first step. “Unless we address the clinical content we have nothing to convey,” one doctor said.