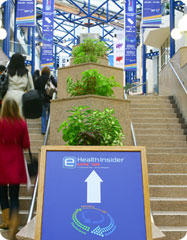 Some 1,300 people converged on The ICC in Birmingham for E-Health Insider Live ’09. E-Health Insider’s editorial team was there to find out the latest on life inside and outside the National Programme for IT in the NHS and what the future may hold as a general election approaches.

“Things are back to how they used to be,” said one observer of the NHS IT scene as he headed out of the exhibition at E-Health Insider Live ’09.

He meant that that debate about healthcare IT and the market for suppliers is back to how it was before the National Programme for IT in the NHS came along. Which they aren’t, of course. The national programme is still very much with us and, indeed, had some significant successes to report in Birmingham.

However, you could see what he was getting at. One of the liveliest stands in the exhibition was run by Integrating the Healthcare Enterprise, which was holding demonstrations of its work on standards and interoperability.

And there was a definite sense of business being done. Predictably, given the dire warnings that are being issued to trusts about the financial crunch that is coming in 2011, business intelligence systems and other products pitched at improving efficiency and quality were generating interest.

Steve Bryant, benefits lead for West Midlands Strategic Health Authority said: “The most important thing is the QIPP [quality, innovation, productivity and prevention agenda]. We need to be starting to make use of some of the innovative technologies that we have got – getting functionality out there and getting the NHS using it.”

Philip Graham, head of IM&T at Blackpool, Fylde and Wyre Hospitals NHS Foundation Trust, agreed. “The important thing for us is the QIPP agenda and the financial crisis that everyone is talking about. We need to be making sure that we are not just implementing IT for IT’s sake, but that it that has a benefit.”

He said one reason his own trust had decided to contract with Alert Life Sciences was to get ahead of the game. “Obviously our Vision [electronic patient record] business case has rather a large return on investment. It is an expensive contract, but as I think foundation trusts have to be looking at how they spend their surpluses to gain more surpluses – so we may see some more big contracts.”

Up and down with the national programme

NHS Connecting for Health, the agency in charge of the national programme, runs any number of projects, some of which are undoubtedly successes. NHS Pathways, for example, which directs calls for emergency and unscheduled care through a call centre and to the most appropriate service commissioned by a primary care trust.

“We’ve now had 1.2m calls through NHS Pathways in the North East and not had an adverse incident yet,” said its head, Jackie Shears. “We’re now awaiting ministerial approval for a roll-out to three more strategic health authorities and – subject to Ofcom approval – we will pilot a national three digit number next year.”

Yet CfH’s highest profile activities – and highest profile problems – have always been around trying to get ‘strategic’ electronic patient record systems into trusts. So the agency received a boost when NHS Bury went live with Lorenzo Regional Care Release 1.9 just before the show.

ISoft executive chairman and chief executive Gary Cohen was confident that this was just the start. In a video presentation followed by a live link-up from Australia, he brushed aside Parliamentary figures showing that Lorenzo has just 174 active users by saying its three early adopters were focusing on functionality rather than wide-scale use.

He also said that not only would University Hospitals of Morecambe Bay NHS Trust meet its deadline for deploying R1.9 next year, but “we are on track to deploy to another 25 trusts in 2010.” This claim, it has to be said, was met with considerable scepticism.

If Cohen was bullish, then Kevin Jarrold, the head of the national programme in London, and Don Trigg, the UK managing director of its main software provider, Cerner, were curiously subdued.

Jarrold repeated his line that lessons have been learned since the disastrous implementations of Cerner Millennium at the Royal Free Hampstead and Barts and the London NHS trusts, and that “things feel very different” at Kingston and St George’s, which are due to go live “this month” and “in the weeks after that.”

But even in response to prodding from session chair Sir Jonathan Michael, managing director of BT Health, Trigg would only say about London that “we are starting to see real understanding of the value proposition” of Millennium and “we are moving forward with the notion of this as a change management initiative, not an IT programme.”

The sheer amount of effort that does have to be put into understanding processes and managing change was emphasised by Brian James, chief executive of The Rotherham NHS Foundation Trust, which has signed up for a Meditech v6.0 electronic patient record system.

“Out of a £30m investment in our new hospital information system, we’re putting £8m in service improvement and change,” he said, adding repeatedly that boards should be extremely clear at the outset about what they were looking to achieve.

James also demonstrates the importance of leadership to getting these projects off the ground and making them work. Leadership was the theme of a keynote address from retired army colonel and leadership lecturer, Tim Collins.

He said: “Good leadership in the NHS is crucial but it has to be local leadership and has to be adapted so that people are delivering at a local level. The point of failure will come if there’s any attempt to centrally organise.” However, he also told EHI that people must innovate and adapt. “If they refuse to change, adapt and listen then sadly they have to find other employment because they are in the way.”

The politics of the future

More than 1,300 people – 945 unique visitors and conference goers and 434 people attached to exhibition stands – made their way to E-Health Insider Live ’09, and most of them were in optimistic mood. Yet there is a lot of uncertainty around, and not just on the financial front.

A general election must be held by June next year, and it is likely to bring about a change of government. Dr Glyn Hayes told a conference session more about the independent review of health and social care IT that he had been commissioned to produce by shadow health secretary Stephen O’Brien – and its aftermath.

“I delivered the report on 31 March, and it went into the Tory party machine. [Shadow Chancellor George] Osborne looked at it. [Conservative Party leader] David Cameron looked at it. Everybody wanted to publish it with a response and they took until August to come up with a response,” he said.

Dr Hayes indicated that he had been unhappy with some of this response. For example, he said his review had not called for the Spine to be scrapped, although it did suggest looking again at how it was used and whether it was appropriate for data storage as well as transfer.

And he stressed that his review had not called for patients to be handed control of their records, although it had called for public reactions to data storage and transfer issues to be considered. “I am doing some work with them to try and pull them back a bit,” he said. “But I do not know – nobody knows – what the policy will look like.”

Tim Kelsey, the founder of Dr Foster, and the show’s other keynote speaker, felt any incoming government should “force the pace” on publishing information for patients and not let organisations that refused to put up quality and ratings information continue to treat them.

A “long view” panel session chaired by journalist Michael Cross also had some firm ideas. Both Roger Wallhouse, chairman of Stallis, and Liberal Democrat Norman Lamb MP felt any incoming government should stick with the national programme, but try to improve it at a local level.

And Conservative former health minister Tom Sackville had some particularly clear advice for his successors, should they make it into office. “Every area should have a working, up to date IT system,” he said, and they should “abandon the lunatic idea of using Google or Microsoft Health Vault” as any sort of alternative.