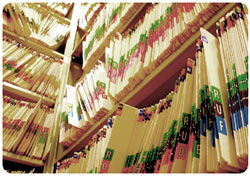 Profession-wide standards for medical records in hospitals have been agreed for the first time and should mean that GPs get the information they need from discharge summaries, according to NHS Connecting for Health and the Royal College of Physicians.

The standards, developed by the RCP and CfH and backed by the Academy of Medical Royal Colleges, set out the structure of the clinical content that doctors should record on admission, at consultant to consultant team handover, at out of hours handover and at discharge.

A spokesperson for CfH said it is working closely with suppliers to ensure the standards are built into their systems.

She added: "Implementation of the new record keeping standards is being managed according to requirements of local programmes. The records will first be incorporated into paper pro-formas, before being introduced into electronic records.

"The new standards are also being incorporated into the design of Cerner and Lorenzo. We are currently working with suppliers to draw up plans for implementation of the standards in acute trusts across the country."

Professor John Williams, director of the RCP Health Informatics Unit, also told EHI Primary Care that incorporating the standards into electronic records would depend on the work CfH does with suppliers. But he expects the standards to be in use in every hospital in paper format over the next year.

“There isn’t a specific timescale for this to happen, and we haven’t been didactic, but I would like to see the structured proformas in use over the next year. We hope that they will be part of the training of junior doctors as they join; so the first milestone will be the next intake of house officers,” he said.

Professor Williams said he hoped the standards on discharge summaries would improve the information GPs receive. He added: “GPs have been involved in the process and this is the first of quite a lot of opportunities to improve communication between primary and secondary care.”

CfH and the RCP said the standards will improve patient safety by standardising the information held on patients during their hospital stay, reducing the likelihood of mistakes and of information being missing at admission, handover and discharge.

They should also mean that clinical information in electronic records only needs to be recorded once, improving efficiency and saving time. And it should simplify the implementation of new clinical information systems, as they can all be built on the same structure standards.

Professor Ian Gilmore, president of the RCP, said: “The biggest single factor in delivering high quality, safe healthcare is the timely availability of accurate relevant information about the patient. I cannot overstate the importance of this vital development in getting that information to the bedside where it is urgently needed.”

The RCP Health informatics Unit has been funded by CfH to develop the standards. It has piloted the prototypes in hospitals as well as sending them out for consultation to patients, carers, other medical royal colleges and specialty societies.

The RCP said more than 3,000 doctors responded to the consultation on admission headings, with more than 90% agreeing that there should be structured documentation across the NHS. The Royal College of General Practitioners was consulted on the discharge standards and GPs took part in pilots in13 hospitals.

Professor Michael Thick, chief clinical officer for CfH, said: “It is absolutely vital that these standards are drawn up by and for healthcare professionals and we welcome the backing of the Academy of Medical Royal Colleges.“We must now continue to work closely with a range of professionals to further develop the standards, ensuring that they meet the priorities of different professions, helping to provide the best care possible.”

A spokesperson for CfH told EHI Primary Care that it was working closely with suppliers to ensure that the standards are built into their systems.

She added: "Implementation of the new record keeping standards is being managed according to requirements of local Programmes, The records will first be incorporated into paper pro-formas before being introduced into electronic records.

"The new standards are being incorporated into the design of Cerner and Lorenzo.  We are currently working with suppliers to draw up plans for implementation of the standards in acute trusts across the country."

Professor Williams said the RCP was also working with CfH and the profession to decide where the next work should be undertaken on record standards.

He told EHI Primary Care the standards would work alongside other standards, such as the NHS Number and SNOMED CT coding, and other standards that need to be developed, including a unique identifier for every professional. “This is one component in a whole raft of standards that are needed,” he said.

The standards have been published following criticism in last week’s annual health check from the Healthcare Commission that record remains one of the weakest areas of NHS performance.

The NHS Alliance also published a report last week showing that one in four GPs believe patient safety has been put at risk in the past six months because hospitals have failed to provide adequate discharge summaries.

The new standards are the subject of the latest column from NHS Connecting for Health to be published by E-Health Insider and EHI Primary Care. Read it in the comment and analysis section of the sites.