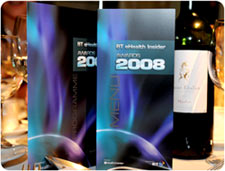 This year’s BT e-Health Insider Awards were held at the Millennium Mayfair Hotel in London. Almost 400 people gathered to see eight awards presented, including the new overall winner award and the Healthcare ICT Champion of the Year, voted for by readers of E-Health Insider. Lyn Whitfield followed the judging and caught the winners for some instant reaction.

The ballroom of the Millennium Mayfair hotel was a sea of blue banners, white table cloths and pink roses as people started to arrive for the BT e-Health Insider Awards 2008.

Almost 400 people attended the black-tie event on the evening of 17 November, to celebrate the best in healthcare IT. As the champagne reception got under way, Mike Bainbridge, NHS Connecting for Health’s clinical architect, and last year’s Healthcare ICT Champion of the Year, stressed the importance of the event.

“Being the ICT champion has been both exciting and fulfilling,” he said. “Since the award, I have been taken much more seriously, and been given invitations to speak all over the world. And the message is we all have the same problems and we can solve them together.”

Sir Jonathan Michael, chief executive of the LSP programme at BT Health, also reflected that a lot had happened since last year’s awards. “It has been a big year for the NHS, with the Next Stage Review by Lord Darzi and the subsequent Health Informatics Review,” he said.

“Both of those reports emphasised the importance of e-health, and that without it we will not be able to deliver high quality healthcare that is also safer and better value for money.” However, he stressed that IT was only an “enabler” and that “when a hospital, or any other organisation, commits to putting in IT systems, it commits to changing its business and ways of working.”

His theme was picked by the event’s master of ceremonies, GP and comic Dr Phil Hammond. He noted that Lord Darzi, a surgeon, was an enthusiast for safety systems in theatre. “He does pre-op checks and post-op checks and has a black box to record what happens between them,” he said.

The importance of persistence and teamwork were emphasised again and again when it came to the awards themselves, the first of which was for the best use of wireless healthcare, sponsored by Cisco. The winner was Abertawe Bro Morgannwg University NHS Trust, for a project to allow clinicians to access patient information at the bedside.

Dr Glyn Hayes, the chair of the independent judging panel, said it was the “scale of the achievement” that stood out. “Seamless is an over-used word in our sector, but this trust really did appear to be using its wireless capabilities to make services operate seamlessly,” he said.

Carl Mustad, the trust’s assistant director of information technology, simply said: “I’m gobsmacked. I was not expecting this. But it is a fantastic reward for all the work the team has put in.” His colleague, Ian Philips, echoed his enthusiasm: “People have come together and worked really, really hard on this,” he said. “I am delighted for all of them.”

Next up was the award for excellence in healthcare information management, sponsored by IMS Health. This was won by University Hospitals Birmingham NHS Foundation Trust, for the work done by its Quality and Outcomes Research Unit in co-ordinating and analysing patient information.

Dr Hayes joked that he had removed himself from the judging for this award, since the trust had “opened me up and re-plumbed my chest.” But he said the judges felt the unit’s work was “an outstanding example of excellent information management in action.”

The judges were so impressed that they went on to give the unit the first ever overall winner award, sponsored by McKesson. Domenico Pagano, a consultant cardiothoracic surgeon at the trust, joked that the awards had been the best night “since the night in 2006 when Italy won the world cup.”

Daniel Ray said the key to the project had been management support and close working between the IT team and clinicians. “We have linked ten systems in our trust to get information out of them for research and to improve patient care,” he said. “It is great to get recognition for all the work that has been done.”

Running through the category winners, the next award was for healthcare ICT product innovation, sponsored by Quicksilva. It was won by Sign Translate for Sign Translate Hospital, a web based communication tool that helps hospital staff to communicate with patients who are sign-language users or foreign language speakers.

Dr Hayes said being a social business had not stopped Sign Translate for achieving on an “impressive scale” and helping to overcome “a real issue in clinical practice.” Phil Murden, its managing director, said his team was “really chuffed.”

“I was talking to a doctor recently who said how hard it was to communicate with profoundly deaf patients, and how we had helped him to overcome that,” he said. “That’s what we’re about. But we’re delighted to have won.”

Patients were also the focus of the best use of ICT in patient and citizen involvement award, sponsored by Fujitsu. This was won by a new media sexual health initiative in the Humber region, involving NHS Choices and local primary care trusts, health professionals and volunteers.

The campaign focused on disadvantaged 14-21 year olds, set up a microsite to deliver localised information about sexual health services, and used text and Bluetooth messaging to deliver content to people in “high risk” areas, such as nightclubs.

Dr Hayes said the judges had found the initiative to be “well organised” and “imaginative” and that NHS Choices had “shown the way in the use of new media in healthcare.”

But Bob Gann, its head of strategy, said: “what was really important in this project was working with the primary care trust in Hull and everybody else who made this really local and relevant to the community.” He was also “really chuffed” to see that work recognised.

There was a slightly different patient focus in the next category, best use of IM&T to promote patient safety, sponsored by NHS Connecting for Health. This was won by the Emergency Care Summary, created by NHS National Services Scotland, which provides clinicians working in out of hours settings with key information about patients.

Dr Hayes said the judges had been impressed that the Scottish service had managed to make the system work so well. “The multiple challenges of security, confidentiality and consent were overcome using sound principles and simple rules,” he said.

“Care summaries for emergency and unplanned care are being produced in many countries around Europe – Scotland is showing the way.” Dr Libby Morris, chair of the ECS programme board, said she picked up the award “on behalf of the entire team” since “this has been a great project, involving a lot of people.”

Teamwork was the theme of the next category, team of the year, which was also sponsored by NHS Connecting for Health. However, this award went to a “virtual team” – the 16-strong multi-disciplinary team behind NHS Pathways, an electronic clinical assessment system for emergency and unplanned care that helps to direct people to the most appropriate service in their area.

NHS Pathways has been piloted in three areas, serving more than 4m people. Dr Hayes said it was “an impressive piece of software” that was already delivering “real gains” where it was in use. “Getting patients to the right place in these circumstances saves lives and stops precious resources being mis-directed,” he said.

Jackie Shears, head of NHS Pathways, said she was “absolutely thrilled” and “privileged to work with a fantastic team that really, really deserved to win this.”

Finally, Dr Hayes arrived at the final category of the evening, the Healthcare ICT Champion of the Year, sponsored by Microsoft, and voted for by readers of EHI. This year, readers had seven potential champions to choose from, and a total of 1,150 votes were cast.

The winner was Sue Rushbrook, head of systems and network services at York Hospitals NHS Foundation Trust, for her work in leading the development of “a leading edge, patient-centred clinical application and community network across primary and secondary care” and “selflessly pushing back the boundaries and resistance to change that such innovation often generates.”

Rushbrook leads a team of more than 50 staff – three of who went up to collect her award, since she was away in Australia. Mark Treleaven, head of marketing for Microsoft’s UK healthcare team, said he was delighted to see so much enthusiasm generated by the awards.

“This is a great opportunity to help people really understand the value of ICT in healthcare,” he said. “We all know there is no way we can deliver improved healthcare without enhancing ICT, and it is great to have the chance to celebrate some of the great work that is actually going on.”

A full list of finalists, and a description of their projects, can be found here.